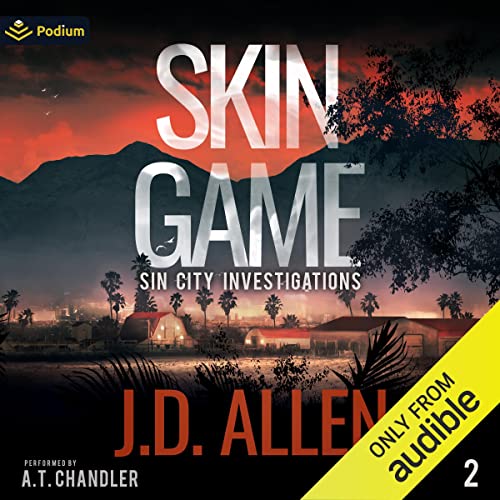 PI Jim Bean should walk out that door and let the Vegas bouncer do his worst. That's what an ordinary man would do. But nobody ever accused Jim Bean of being ordinary.

Private Investigator Jim Bean has worked hard to create his new identity in Vegas. He doesn't have a great life, but it's his. When his ex-fiancée, Erica Floyd, walks into one of his investigations looking for her missing sister, the tragic past he wanted to leave behind comes flooding back.

Despite serious reservations, Jim agrees to search for Erica's sister. Clues lead him to a human-trafficking ring and one of Vegas' most influential mobsters. Unless Jim can face the ghosts of his past, the anger of his present, and a new enemy out for his blood, four women will suffer a fate worse than death.

“That wonderful and rare combination of high-speed suspense and complex, richly drawn characters will keep you on the edge of your seat.” (Jeffery Deaver, New York Times best-selling author)

"With one foot in the classic PI tradition and the other in the new age, Skin Game is no roll of the dice. J.D. Allen delivers a smart, fast-paced book that will keep the reader on edge from start to finish." (Reed Farrel Coleman, New York Times best-selling author of What You Break)

What listeners say about Skin Game

The start of every paragraph is missing, you get the second syllable of the first word as the start.
Yes you can guess what the first word is but it annoys the hell out of me and prevents me from enjoying and continuing with the book. I got to chapter 20 and was pulling my hair out and have admitted defeat.
A poor recording really can ruin a book

Another excellent performance by Chandler. Picking up more on Beans back story. Worth it.

Jim is on another intense rollercoaster case encompassing more danger and dodgy situations. Several characters from Book 1 have walk on parts (not Ava).

Good thriller, but at hour 6, sadly, the female MC Erica, supposedly a smart banker, becomes a contemptible, tiresome, gormless prima-donna, so unlike her behaviour earlier in the book and the other MC females in Book 1. It made the last hour of the book hard to finish, such was her tedious dominance overriding the other MCs. And yes she survives the outcome and is still in the life of Jim at the end which will seriously affect whether I go to Book 3. (I subsequently got book 3 and phew, she's not in it, so read on in comfort).

GOOD UNTIL IT WASN'T

Outstanding character development. I will be checking out more of this author. Highly recommend J.D.Allen.

Good story like the details and subject matter. Would like to see more detail on how the gave this to police.

The first pulled me in. After listening to the second in the series I want to listen to them all.

Thank you for an outstanding listen
I look forward on connecting the series. Love the action

Seedy side of Vegas

Action and a painful reminder of the past come to find Jim Bean.
Human trafficking and the ugly reality of what can (and probably does) happen to young girls.

Minimal profanity. I like the protagonist, he’s flawed but still a good guy. Like OO, too. MrJ was more forgiving than I think I would be of MsE. Ready for the next one.

Maybe it’s because this was the second book in this series I’ve read I found, about half-way through, that I was really sick of Jim’s internal whining….over and over and over we went about how he’d been such a victim, endured his drinking, his anger. No one likes a whiner, even when there is a reason for it to begin with.

I hope in the third book the author will give readers some relief…because I will read the next in the series. I really like the characters, the plots, the performance, the pacing, the development. Just, please, enough whining!

Keeps you on the edge of your seat. Feels little you are right there in Vegas the whole time. Great story.