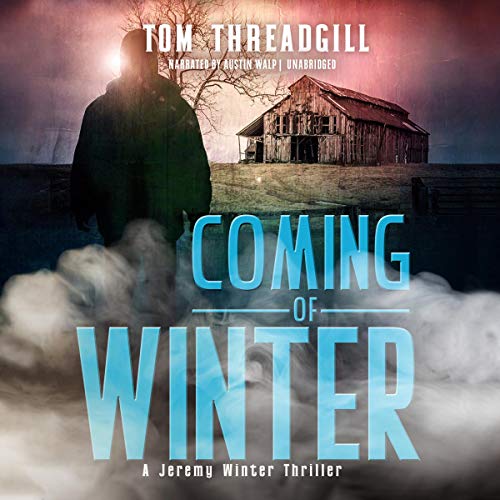 By: Tom Threadgill
Narrated by: Austin Walp
Try for £0.00

Catherine Mae Blackston is missing. She is not the first.

While investigating Blackston’s recent activities, FBI Agent Jeremy Winter stumbles upon a string of missing persons within state parks. Unable to convince his boss that Blackston’s disappearance is anything other than a lost hiker, Winter joins forces with a local police officer to continue the search.

As the clues mount, a dark figure from Jeremy’s past emerges with an ultimatum - one that could force him out of the bureau. Afraid that his girlfriend, fellow agent Maggie Keeley, will be dragged into a high-stakes political game, he delays his decision. But as the tally of missing persons increases, Winter closes in on the unlikeliest of suspects.

The bodies are out there.

He just has to find them before his past catches up with him.

What listeners say about Coming of Winter

I couldn’t listen to it longer than a few minutes, the audio was so stilted. It sounded like it was a digitised voice, not a real human being. Really bad. Thankfully, it was free when I downloaded it so I didn’t waste any money.

I’m sorry I can’t comment on the story, I just couldn’t cope for more than a few minutes. The narrator has less flow that Stephen Hawking’s computer interface. I haven’t heard such stilted reading since school. Very. Very. Bad.

The book itself is what kept me listening. I really enjoyed it. Unfortunately I didn’t like the narration, it was very frustrating. I’m sure if I got a copy of the book it would show the narrator paused slightly at the end of every line not just sentence. It’s a shame as I think I want to listen to book 2 but it is read by the same person and I don’t think I can listen to him for another 10 hours

The reader, unfortunately, is trying to insert dramatic pauses far too often. It sounds so stilted. Besides that, I did enjoy the story.

Enjoyed the characters and story but completely ruined by the narration. Was this done by AI?? Who on Earth speaks in that stilted, over-pronounced way? Completely un-natural. Managed to stick it to the end but not keen to repeat.

Looking forward to the next...

Jeremy Winter has been with the FBI for 23 years. He's a man with a secret to hide from his time in Afghanistan and issues with anger management.
Now, he's been transferred to Tennessee and relegated to working on white collar crimes. Winter accidentally comes across a missing person at a state park, then another and another. From what Winter can find this is not new. There's a serial killer out there and he's been active for years. The problem is convincing his supervisor. Winter is working on a gut feeling connecting these murders, there is no tangible evidence. On top of that there's an incident from years ago in Afghanistan that threatens his career today.
This isn't a who done it. The author lets you in on the person and his family. This book is about how will he be caught and will Winter be able to prevent any more murders.
Very well written with believable and vivid characters.
Austin Walp does an excellent job narrating.
This book has my HIGHEST RECOMMENDATION.
If you found this review helpful please indicate so.
Thank You.

I purchased and listened to COMING OF WINTER during August of 2019 after reading the review by Shelley (Raleigh NC). Author Tom Threadgill was new to me. He deserves a lot more attention. Narrator Austin Welp was also new to me. He does a nice job.

This is great! Loved the story, the characters and the journey. I found a new author to read up all his books!!!

Wait for it, it will get interesting.

I read some of the reviews before I got this book and they talked about how boring the narrator was but if you're using audible or a service of the like, use the sample button and listen to a 5 minute clip to see if you can deal with their voice before writing a bad review!
With that being said, the narrator was a bit stiff but nothing couldn't get past. The book seemed to be a little slow until about half way through then I finally seemed to be hanging on to what was happening next. This was in the free section for me in Audible, maybe it is for you too. A good listen.

this had the potential to be an amazing book. i loved the story line and it really captured my attention immediately. However, i could not listen to the reader...his slow reading and ridiculous ennunciationwas driving me crazy...can you get someone else to read this? ugh this is why it took me so long to get into audibles....torture!

Hard to listen to

Not a terrible story, but the narrator? I mean, where do they find these people? Absolutely horrible. “Police-MAN”, “Jeep Wrang-guh-lurr”? This guy was so robotic and the enunciation was atrocious, I promise, anyone reviewing this narrator positively is a family member of his.

Read like a textbook ... completely devoid of emotion or interest. No thanks. Just couldn't connect with this

This might have been a great mystery...I'll never know since the author went into great detail using a serial killer and his young sons to shoot stray dogs. There is enough cruelty to animals in reality and I simply refuse to accept it in fiction.

The author is a good writer. But he seems to be inordinately - almost pathologically focused on describing the serial murderer’s pleasure, not so much in killing, but in dismemberment, treating, handling, and cherishing bones. He spends as much or more time in the murderer’s reveling with remains as he does developing the character and story around the protagonist who’s inner thoughts he seems far less interested in. But, I’m not squeamish so I finished the book and began the second. In the first two minutes into the book he is describing the joy of dismemberment and handling of bones again. I deleted the book. I recommend readers avoid the books unless you share the author’s apparent fetish.

I enjoyed this Audible really good first in series. On to the next.👍Definitely Recommend this title.