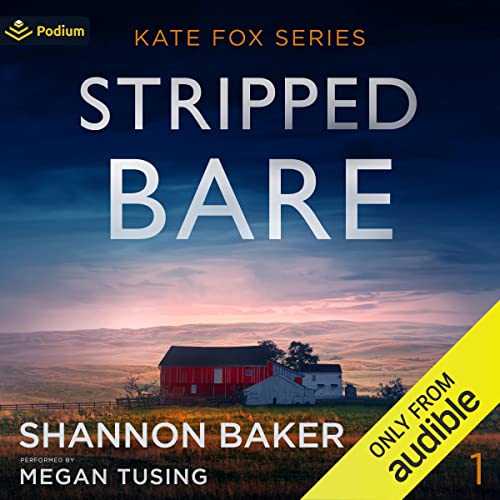 By: Shannon Baker
Narrated by: Megan Tusing
Try for £0.00

In this riveting novel from award-winning author Shannon Baker, a Nebraska county sheriff’s wife investigates a murder - and her husband is the prime suspect.

When Kate Fox receives a late-night phone call, her seemingly perfect life on the Nebraska prairie shatters in an instant. Eldon, shirt-tail relative and owner of one of the largest cattle ranches in Grand County, has been killed. Kate's husband, Ted, the Grand County sheriff, has been shot and may never walk again. And worst of all, Ted is the prime suspect in Eldon’s murder.

Desperate to clear Ted's name, Kate throws herself headlong into the hunt for the real killer. When she finds herself the victim of several mysterious “accidents”, she knows she’s running out of time. If she doesn’t find out who killed Eldon soon, she - or someone else in town - may be the next to turn up dead.

But a shocking confession throws everything into doubt, and as Kate keeps digging, she unearths unfathomable secrets - the kind worth killing for.

"With Stripped Bare, Shannon Baker offers readers a protagonist and a place they will love coming back to visit book after book." (William Kent Krueger, New York Times best-selling author)

"Baker serves up a ballsy heroine, a colorful backdrop, and a surprising ending." (Kirkus Reviews)

"Devotees of Craig Johnson’s Walt Longmire series and fans of Judy Clemens are sure to appreciate this title." (Library Journal Pick of the Month)

What listeners say about Stripped Bare

A gripping story of crime and retribution in the Midwest. I liked the people and the story was engaging and unpredictable. I’m buying Book 2!

Categorised as ‘Crime Thrillers, Suspense, Women Sleuths’. Soap opera would have been a better description.
Pace was too slow, characters easily forgettable, story had no substance.
One star because it was free.

It could have been anyone…in fact by the time the killer was revealed I’d completely lost track of who was who and it didn’t really matter to me. Maybe I didn’t concentrate enough but I felt the story lacked reason.

I finished it in one go!

Admittedly I was a captive audience due to a leg injury but this proves my point. If I hadn't thoroughly enjoyed the whole thing I would have quickly been searching for another channel. I selected this book at random from the "included" section on Prime as I wasn't in the mood for the contents of my library. How surprised I was. A tale which doesn't follow the usual formulae, isn't "polity correct" as both male and female characters are presented as good, and and indifferent. It comes from an area of America which defies the pattern, a wilderness close knit community instead of the usual urban jungle. The characters are fleshed out in human form and resemble families and relationships found all over the western world. Pity a certain Harry didn't read this! The storyline is excellent and has a twist in the tale. I will certainly buy the second book in the series.

Enjoyable though some scenes harrowing, description of Nebraska sand dune community, country adds to depth of plot. Recommend this first, expect following to be as interesting

I liked Kate Fox from the off and her complex family. The authors described the land in a way you could imagine and also want to see. Well written book. The narrator was a great choice as she seems to make Kate Fox a strong and Charla her you route for. Looking forward to listening to book 2

I listened to this for free. If I had paid for it, I would have sent it back for a refund. I didn't rate the narration but, to be fair, Ms Tusing didn't have a lot to work with.

I wasn’t sure this would be my kinda thing, but the witticisms, the brilliant descriptive writing and the engaging lead character all drew me in and I didn’t want it to end. Onto book 2 of the Katie Fox series!

I found the continuous quotes annoying and seems long and drawn out.
Tried but I just couldn’t like any of the characters.

This really was a struggle. There is no real story and I was really close to giving up a few times. Attempts at humour failed and the poor woman can't seem to imagine anything other than crashing and dying and comes close one too many time. it just gets a bit boring I am afraid. Get it when it's free - don't waste a credit.

Found myself just daydreaming instead of listening. Story could not capture my attention. Like white noise machine

Good storyline, with a well-placed twist at the end. My only issue with it was the reader's performance at the very beginning. It sounded more like she was reading it for the very first time. The pauses and voices did not quite match. beyond that, finishing the story, I thoroughly enjoyed it and I'm looking forward to book 2.

I very much enjoyed this book. Was well read by Megan Tusing. Great story line. Steady pace with happens all the way to the end. No dull spots. This will be a favorite author & story for me. Can’t wait to listen to the next story.

Had the potential to be good!

I love when an author weaves a way of life into a story which Baker did well. But there were a number of plot lines that were left unresolved or just did not make sense. Kate has a lot of inner dialogue throughout the book but the narrator did not do a good job of distinguishing it from spoken dialogue. Also, as a book that is laying the groundwork for a strong female character, I do not understand why she stood by and never spoke up in so many situations. Why never confront Ted? Why go along with Roxy? It’s all the makings of a pushover.

Started out ok but characters were not likable, story was repetitive and I found the ending to be anticlimactic.

The main female character made me have a bad attitude all day. Why make someone so weak? The way she bowed down to everybody was the saddest sh&$. This listen will piss a strong woman off.
Not to mention all the rambling on inconsequential details. This book should have been 31/2 hours tops.

Without a twist or 2, a book is no good. If they are easily seen or guessed, then there is no suspense & no need to read the book. This story was beginning to draw out, or so I thought, and then, WHAM! Talk about being completely blindsided. Lol

This is another book that is completely captivating about a small town. Everyone knows everyone &/or is related and they all know everyone's business as well. When there is a murder of a local man and the sheriff has also been shot, fingers start pointing and blaming. Secrets start pouring out too. Soon, the once quiet happy town is now finding out there is danger and unrest.

This is a great book! The characters are well rounded and the storyline was really clear. I’m really looking forward to the next book in the series!

This was better than I expected. already got the second one to go right into.

…after 5 hrs of listening I had to delete this title. At the 4hr mark I thought it was finally opening up but then it slid back into nonstop chatting and introspection, the main character talking or thinking to herself, probably the worst story yet that I’ve started on Audible and only the second I’ve given up on entirely. Unbearable! The reader did a fine job, but the story itself should have been condensed down to a short story.