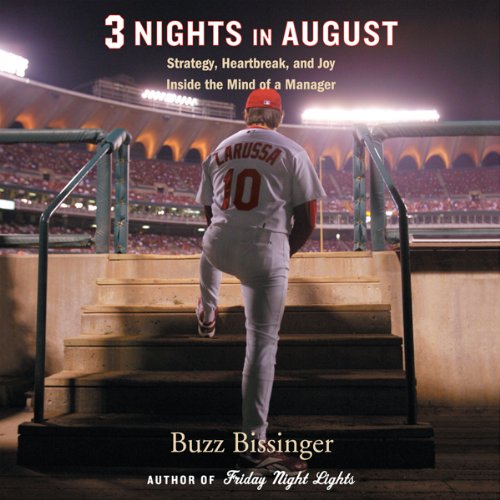 By: Buzz Bissinger
Narrated by: Jeffrey Nordling
Try for £0.00

Through 25 years of managing, Tony La Russa has won more games than any current manager. He's the most strategically adept and arguably the smartest manager in baseball, and he still believes that games are won not by statistics, but by the hearts and minds of the players.

Given unprecedented access to La Russa and his team, best-selling journalist Bissinger captures baseball's strategic and emotional essence. We watch from the dugout as La Russa's Cardinals take on their archrivals, the Chicago Cubs, in a thrilling three-game series.

Some of the greatest players of our time grace the lineups: Albert Pujols, Sammy Sosa, Scott Rolen, Mark Prior. La Russa, a 40-year veteran of the game, shows why he's so revered. And Bissinger's laser-beam focus uncovers surprising truths about the pathology of slumps, the art of beanball retaliation, the eccentricities of pitchers, and the timelessness of the game. His swinging prose brings every moment gloriously to life.

"Enthralling." ( Booklist)"Mixing classic baseball stories with little-known details and an exclusive perspective, this work should appeal to any baseball fan." ( Publishers Weekly)
"With a knack for detail, the Pulitzer Prize-winning author picks apart the fundamentals of the game, enters the mind of one of baseball's greats, and provides the reader with a front row seat. His ability to bring to life America's pastime is wholly provocative and excruciatingly detailed." ( Bookmarks Magazine)

What listeners say about Three Nights in August

Excellent listen from start to finish. Great insight into the game especially for the long distance fan

Book with good premise follows through

I'd recommend this book to anyone who wants to truly understand some of the layers of baseball that you don't normally think about. This book is not just for fans of the Cardinals or Larussa because most of it can be applied to any facet of any baseball team.

Why we love Baseball!

This book is about everything that is great and not so great about baseball. Great to listen too because it reveals the why and how this great game works and why we love it so much. The best insight about what really goes on behind the scenes and in front of the fan. If you want to learn and be entertained then this is one of the best listens I have had the pleasure to put on my iPod. Beautiful!

I have been a baseball fan all of my life. I have played baseball, coached and managed youth baseball teams. This is the best book on the Game that I have ever read or listened to. It is superbly written and wonderfully read. It is so much more than a just a look into one man's life in the Game, it is a timeless look into the intricacy and beauty of baseball.

A terrific insight into the gamesmanship involved in what naively might be thought of as a 'kids' game'. Will help any reader appreciate baseball at a new level.

The writing is superb, the narration stellar. If you ever cared about baseball (and I don't as much as I used to), this is a compelling book about the beauty of the game. Even in this era of spoiled multi-millionaire players, there is still passion in the game, and you can feel it in each chapter of Three Nights in August.

This is a well written book whose knowledge of baseball is up to the task. The author Buzz Bissinger shows this in many ways; most importantly to me is the mention of Charley Lau who is one of baseball?s great teachers of hitting.

It did not hurt that the author makes a slight reference to Samuel Beckett?s Waiting for Godot, for I am also a Beckett reader.

This is a must listen for any baseball fan. I glimpse in to the thought process of a manager.

loved it! Larussa is one of the greatest managers of all time! Go Cardinals! 11 world series rings!

Superb baseball commentary and perspective on leadership, life, and people

In an era of stat crunchers in sports everywhere, La Russa deciphers the variables that can’t be calculated about the game and those who play it. Viewed as archaic and against the grain by many in his managerial style, his timeless truths have time and time told a different story.

Love is a steady, lifelong commitment to getting one and their intricate inner workings. Similarly so is baseball, a sport only truly understood on a deeper level through the passage of time and devotion to it.

Superb. Must-read for any baseball fan.

Amazing detail, both technical and human-interest. Takes you inside baseball in a rare and entertaining way.