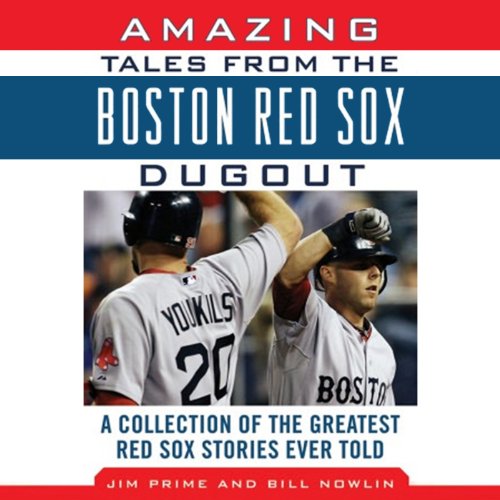 By: Bill Nowlin,Jim Prime
Narrated by: Gary Telles
Try for £0.00

Authors Bill Nowlin and Jim Prime get down and dirty in the Fenway Park dugout, collecting the most sensational stories and juicy anecdotes about the beloved Boston Red Sox baseball franchise. The team was founded in 1901, so these colorful tales span several generations, touching on both triumphs and tribulations, and also revealing lesser-known narratives. Gary Telles’s performance recalls sportscasters of yesteryear, setting the perfect tone for this audio treasury. This is a must-have for serious students of the game.

Founded in 1901, the Boston Red Sox have been making history for over a century. The passion of the players, the tragedy and triumph of the “Bambino’s Curse” - the Boston spirit comes alive in this collection of stories and anecdotes from Fenway Park. Any baseball fan will find this book irresistible.

learn your A B C's with the red sox.

If you are a fan of this team, or even baseball itself, These tales will delight, and yes, amaze.

it a great collection of stories as advertised. Kept me laughing. Some I had heard others I hadn't. I will be listening to it over and again. #RedSoxNation

Not a format conducive to audiobook

The book is a series of anecdotes, seemingly anywhere from one to several pages long. It is not organized chronologically or, as far as I can tell, thematically. Each section is titled with the name of the individual at the center of the anecdote, so a story on, say, Dom Dimaggio ends without warning, the narrator abruptly announces, for example, "Roger Clemens," and it's off to the races on his 20-K performance against Seattle. Probably fine in a book, but as an audiobook, it's like sitting next to a talkative and somewhat drunk old man at a Boston bar.

The lack of context around each makes the perpetual shifting of time particularly hard to follow. Oh, Billy Rohr got the Impossible Dream season off to such a start....oh, wait! now we're considering Wade Boggs' penchant for chicken and, strangely, his marriage trouble...but there's no time to figure out what one has to do with the other, because now it's an apocryphal account of that time Harry Hooper threw a ball really far....oh, no time for that, Ted Williams is a fighter pilot now....and now the war must be over, because Wakefield is throwing knuckleballs that only Doug Mirabelli can handle...even an experienced Sox fan - one who likely knows most of these "Amazing Tales" - will find his or her head spinning.

Rearranging the stories into chronological order may have made this listenable....but maybe not.

Some of the anecdotes are interesting-ish...but not as much so as those in, say, Francona, Bouton's infamous Ball Four, or even The Baseball Codes.

Was Amazing Tales from the Boston Red Sox Dugout worth the listening time?

Probably not. Lifelong fans already have heard these along the way from the NESN crew or elsewhere, and casual fans will find it perplexing.