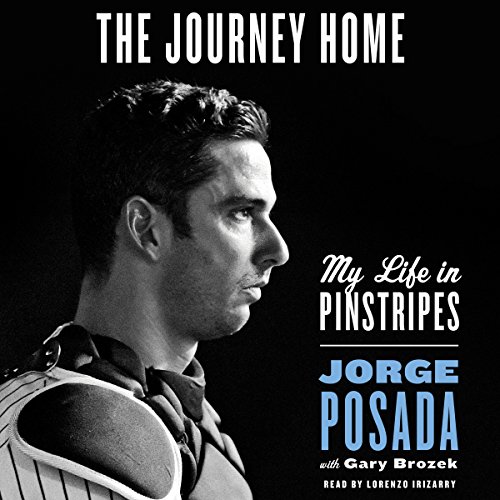 By: Jorge Posada,Gary Brozek
Narrated by: Lorenzo Irizarry
Try for £0.00

The legendary New York Yankees catcher tells the incredible story of his personal journey, offering an unexpected behind-the-plate view of his career, his past, and the father-son bond that fueled his love of the game.

For 17 seasons the name Jorge Posada was synonymous with New York Yankees baseball. A fixture behind home plate throughout the Yankees' biggest successes, Jorge became the Yankees' star catcher almost immediately upon his arrival, and in the years that followed, his accomplishments, work ethic, and leadership established him as one of the greatest Yankees ever to put on the uniform.

Now, in this long-awaited memoir, Jorge Posada details his journey to home plate, sharing a remarkable generational account of his journey from the ball fields of Puerto Rico to the House that Ruth Built. Offering a view from behind the mask unlike any other, Jorge discusses the key moments and plays that shaped teams and forged a legacy that came to define Yankees baseball for a generation. With pitch-by-pitch recall, Jorge looks back across the years, explaining how - as part of the Core Four alongside Derek Jeter, Andy Pettitte, and Mariano Rivera - he helped to reestablish the Yankees as a dynasty and win five World Series.

Going beyond his all-star career, Jorge also shares his life in full for the first time, examining how his remarkable journey to the big leagues began in the most unexpected of ways. Digging into his cultural roots in Puerto Rico, the Dominican Republic, and Cuba, Jorge illuminates three generations of cherished father-son relationships that have made him the man he is today. At the center is the deep bond he shares with his father and namesake, Jorge Sr., who escaped Cuba and would eventually mold his son to be a ball player, honing his talent and instilling in him the drive necessary to fulfill his childhood dream of playing in the Bronx.

What listeners say about The Journey Home

So the last baseball game I remember watching … and only because I like Nolan Ryan and thought he was one of the last of the greats, was his last no-hitter.As a child I loved the Reds with Johnny Bench and Pete Rose.
Saying that, I can never recall that I have heard the name Jorge Posada, nor have I ever watched him play. I like biography and memoirs and to see how people reacted to things in their childhood and figured out the “tough stuff”.
While this book has a lot about baseball and the Yankees, it has more about the parenting style that made a superstar, one that didn’t quit when it got hard. One that would come to see the benefits of what dad had done being tough…or so he thought to him as a child and teenager.
A book about real struggle when you have a child and they have issues, and most importantly the genuine love and respect that teammates have for each other as they battle it out in practice, games, and life.
I don’t care if you know this guy or not, or even if you like baseball…you will love this book!!!!

I like that he talk about other Yankees and that his family is important. I like everything about the book nothing I would change.

I am a huge Yankees fan but I preferred watching Jorge play over reading this book. The beginning was interesting about him growing up but reading the play by plays just bored me

This was a great book and story told if you love baseball but my specifically the Yankees this is the book for you...

Undervalued but not to people who know baseball

Great story from my favorite player

I loved hearing the story of how Jorge Posada worked hard to become such a great baseball player. His love of the game and his family is very inspirational.