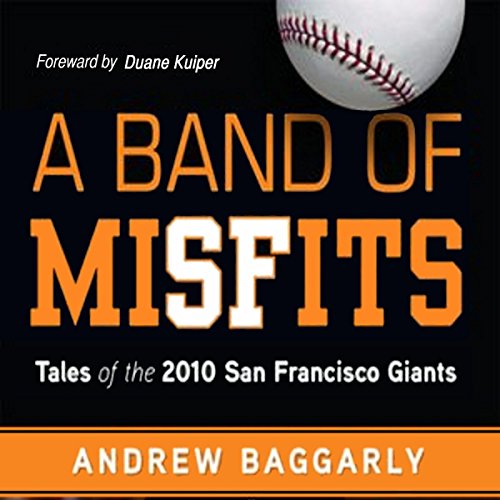 A Band of Misfits

By: Andrew Baggarly
Narrated by: Brian Troxell
Try for £0.00

For 53 years, San Francisco waited. Waited for a team like the 2010 Giants to come along. Waited for a team that could end a title drought that started in New York and carried on for more than five decades after a move to the West Coast. Waited for that one magical postseason run that could unleash more than a half-century of pent-up frustration. At long last, the 2010 Giants hopped on that magic carpet and made it happen. San Jose Mercury News beat reporter Andrew Baggarly captured the 2010 Giants' incredible run through the regular season, playoffs and World Series in his new book, A Band of Misfits: Tales of the 2010 San Francisco Giants, as they finally captured that elusive title not just for the team, but for the entire city of San Francisco.

What listeners say about A Band of Misfits

Baggs is such a great writer. l love his pieces for The Athletic and this book didn't disappoint.

Bags wrote a great book! I learned some things that didnt hit the papers. It brought me back. Thank You.

This booked Helped me relive the magic! Very fun and easy to listen to. Go Giants!!

So wonderful to re-live that season and learn some great nuggets about so many players. Great narration too. Well done Baggs!

Anyone who like the giants or baseball will love Andrew Baggarly’s writing. He is the best columnist working today and this book is a wonderful recounting of the 2010 World Series run.

I enjoyed this audio book. I am a lifelong SF Giants fan and looked forward to this book as the 2018 season began. It inspired me to root for the Giants and get me hopeful for a successful season. I enjoyed all of the anecdotes and insights for this World Series winning team. It had been quite some time since the Giants won this first ever world series since moving to San Francisco and I enjoyed re-living the 2010 season. My complaint is the author seems to bounce around too much. He did not stay within a chronological time-line. It made the book a little "messy" to me. I would have preferred a steady flow constantly going forward and not so much bouncing around from the past to the future and vice versa. All in all a good time that I would recommend for any Giants fan.

The story of a team cobbled together from spare parts with the exception of the young, highly talented starting pitchers. 2010 marked the beginning of the early slide that affected diminutive pitcher Tim Lincecum and the ultimate rise of Madison Baumgarner, their current ace starter; the man who led them to the 2014 World Series championship. The author obviously got to know the players and their stories better than some of the other baseball books I've purchased from Audible that don't go very far past game reports and statistics. A good listen for baseball fans.