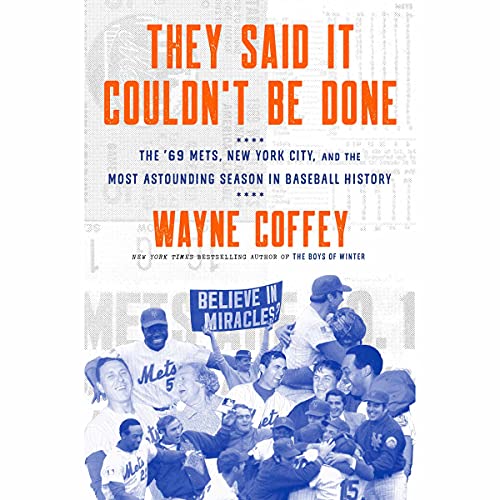 They Said It Couldn't Be Done

By: Wayne Coffey
Narrated by: Gary Cohen
Try for £0.00

“One of sports’ most storied championship teams gets its proper due” (Tom Verducci) in this definitive history of the 1969 Miracle Mets from the New York Times best-selling author of The Boys of Winter.

“If you want to know what it was like to live and witness a baseball miracle in tumultuous times, this book is for you.” (Ron Darling, former New York Mets All-Star and best-selling author of Game 7, 1986)

The story of the 1969 New York Mets’ season has long since entered sports lore as one of the most remarkable of all time. But beyond the “miracle” is a compelling narrative of an unlikely collection of players and the hallowed manager who inspired them to greatness. For the 50th anniversary, renowned sports journalist Wayne Coffey brings to life a moment when a championship could descend on a city like magic, and when a baseball legend was authored one inning at a time. Future Hall of Fame ace Tom Seaver snagged the biggest headlines, but the enduring richness of the story lies in the core of a team comprised of untested youngsters, lightly regarded veterans, and four Southern-born African-American stalwarts who came of age in the shadow of Jackie Robinson.

Most of the Mets regulars were improbable candidates for baseball stardom. The number-two starting pitcher, Jerry Koosman, grew up on a Minnesota farm, never played high-school ball, and was only discovered because of a tip from a Mets usher. Outfielder Ron Swoboda was known for long home runs and piles of strikeouts, until he turned into a glove wizard when it mattered most.

All of these men were galvanized by their manager: the sainted former Brooklyn Dodger Gil Hodges, whose fundamental belief in the power of every man on the roster, no matter his stats, helped backup players like Al Weis and J.C. Martin become October heroes. As the Mets powered through the season to reach a World Series against the best-in-a-generation Baltimore Orioles, Hodges's steady hand guided a team that had very recently been the league laughingstock to an improbable, electrifying shot at sports immortality.

“A must-read for not just for Mets fans, but allbaseball fans who will appreciate what indeed was the most astounding season in baseball history.” (Ken Rosenthal, two-time Sports Emmy winner for Outstanding Sports Reporter)

“Having lived through the Mets’ 1969 World Championship in real time and re-lived it for fifty years, I thought I knew all I needed to know about my boyhood heroes, but in They Said It Couldn’t Be Done Wayne Coffey has unearthed some fresh gems; most poignantly those involving the personal backgrounds of many of that wonderful team’s players. Wayne has done a marvelous job of allowing us to relive that epochal event through a fresh prism. This is simply a great read.” (Howie Rose, New York Mets broadcaster)

“Entertaining [and] thorough.... It’s the small notes of grace that kept me engaged.... Should appeal to any baseball-loving reader who wants to know where the Mets came from and how they pulled it off.” (New York magazine)

“I would read Wayne Coffey writing about hardwood floors. So for someone who was a diehard Mets fan in 1969, I knew They Said It Couldn’t Be Done was a book I couldn’t miss. Like The Boys of Winter, his brilliant book about the 1980 US Olympic hockey team, this is a fantastic piece of work. Please buy it, and enjoy every page, as I did.” (Tim Layden, Sports Illustrated senior writer and NBC sports essayist)

What listeners say about They Said It Couldn't Be Done

You don’t have to be a fan

But it helps.
Great choice picking Gary Cohn to read.
Cements Gil Hodges as the central force of the 69 Mets.
Any casual baseball fan will enjoy this. My wife enjoyed it. If you were around for the season, you’ll cry.

A must for any Mets fans

An excellent audiobook for those of us who were not alive when this happened, but still appreciate Mets, history and lore!

An irresistible tale of underdogs climbing from the trash heap to the top of the mountain. I found it very inspiring.

As a 13-year-old devotee of the St. Louis Cardinals in 1969, if my team wasn’t in the World Series I rooted for any National League team except the hated Dodgers. As baseball fans, we followed every NL team, knowing the players and their statistics around the league, so this book brought back a thousand memories of players and a game long forgotten. This book is filled with great baseball stories and history, no matter when you came to the game. It’s a well-written delight.

Just When I Thought I Heard it All

Beautifully written with new back stories put in context with the times. Gary Cohen's narration is a major bonus.

A lot of play by play

It’s a very good book, but a big chunk of the story is taken up by play-by-play descriptions of games. I don’t mind play-by-play, but I generally prefer sports books to tell all of the stories that going on around the game.

Even if you’re not a Mets fan, this is a great book to listen to. I was 13 at the time. Loved baseball. Rooted for the Pirates. Kind of glad to see the Cubs wilt. The book is great because we learn a bit more about Gil Hodges. A great player and manager, but an even better human being. I enjoyed hearing details about Ed Charles, Don Cardwell and other lesser known members of the Mets. A great job with the narration, too. 👍

Great book for the Mets fan or baseball fan

I really enjoyed this story by Wayne Coffee on the 1969 Mets. He goes way back to the Genesis of the team, and was able to get interviews with members of that Amazing Mets who are no longer with us. It gives us a greater appreciation of what a good manager Gil Hodges was, and what a fantastic human being and leader he was. I very much enjoyed this book.

It brought me back to my youth, watching the games in my house Commack L.I.
The indebtedness of the players backgrounds and the stories of Gill Hodges
Just loved this book
Thank you,

Brilliant account of a most wonderful season and the men who brought it to life on the ball field. Couldn't stop listening.