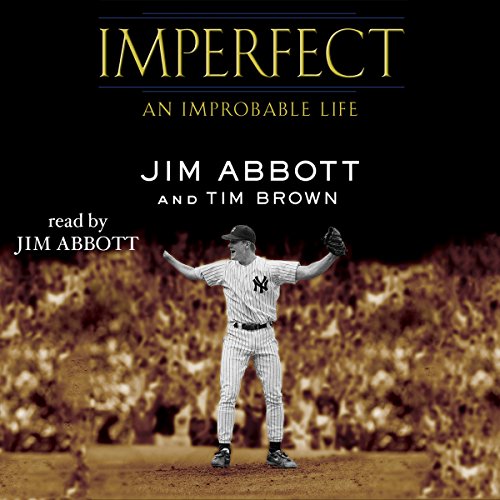 On an overcast September day in 1993, Jim Abbott took the mound at Yankee Stadium and threw one of the most dramatic no-hitters in major-league history. The game was the crowning achievement in an unlikely success story, unseen in the annals of professional sports. In Imperfect, the one-time big league ace retraces his remarkable journey.

Born without a right hand, Jim Abbott as a boy dreamed of being a great athlete. Raised in Flint, Michigan, by parents who saw in his condition not a disability but an extraordinary opportunity, Jim became a two-sport standout in high school, then an ace pitcher for the University of Michigan. But his journey was only beginning.

As a 19-year-old, Jim beat the vaunted Cuban National Team. By 21, he’d won the gold medal game at the 1988 Olympics and - without spending a day in the minor leagues - cracked the starting rotation of the California Angels. In 1991, he would finish third in the voting for the Cy Young Award. Two years later, he would don Yankee pinstripes and deliver a one-of-a-kind no-hitter.

It wouldn’t always be so good. After a season full of difficult losses - some of them by football scores - Jim was released, cut off from the game he loved. Unable to say good-bye so soon, Jim tried to come back, pushing himself to the limit - and through one of the loneliest experiences an athlete can have.

But always, even then, there were children and their parents waiting for him outside the clubhouse doors, many of them with disabilities like his, seeking consolation and advice. These obligations became Jim’s greatest honor.

In this honest and insightful memoir, Jim Abbott reveals the insecurities of a life spent as the different one, how he habitually hid his disability in his right front pocket, and why he chose an occupation in which the uniform provided no front pockets. With a riveting pitch-by-pitch account of his no-hitter providing the ideal frame for his story, this unique athlete offers readers an extraordinary and unforgettable memoir.

"Jim Abbott is the embodiment of perseverance. The obstacles that he was able to overcome to play the game at the highest level are remarkable and his story can teach all of us valuable lessons. Jim was a fierce competitor. He never viewed his disability as a disadvantage and, as a result, it wasn’t. Imperfect is a terrific story and the best part is that it’s true.” (Baseball Hall of Famer Cal Ripken, Jr.)
“As I read Imperfect: An Improbable Life, Jim Abbott’s love for the game jumped off the pages. It was like Jim was right in front of me telling me his life’s journey. I felt his pain, hurt, joy, exhilaration, disappointment and accomplishments throughout his life. Jim has always been and continues to be an inspiration for all of us.” (Don Mattingly, former New York Yankee captain and current Los Angeles Dodgers manager)
“The story of Jim Abbott - wonderfully crafted by Tim Brown - is everything you’d expect from a baseball life: funny, heartbreaking, and triumphant, though not necessarily in that order. Still, to label this fine book ‘an inspiration’ almost misses the larger point. Imperfect isn’t about learning to cope with a disability. It’s about becoming a man in America.” (Mark Kriegel, author of Pistol: The Life of Pete Maravich, and Namath: A Biography)

What listeners say about Imperfect

A Must for Parents of Kids with All Abilities

I listened to this one about five years ago after it was initially published, and wrote a review that was subsequently lost without uploading to audible. Since it's baseball season and several years since, I re-listened to it and enjoyed it even more.

As mentioned in my headline, this book is really about parenting and teaching kids (regardless of ability) to believe in themselves and encourage them to seek after their dreams. I remember my mother telling me about Jim Abbott when he was drafted and headed to spring training as the "one-handed pitcher"; she innately knew, like Jim's parents, the value of teaching kids about adversity and overcoming them. I was quite an impressionable 10 year old, especially with anything about baseball, so hearing about Jim was something special... even if I was an Oakland Athletic's fan.

The book itself reads like the movie, For Love of the Game, as it ostensibly follows the thoughts of Jim Abbott during his no hitter with the Yankees in 1993 as it does with Kevin Costner's character portrayal in the movie; although there is no connection between Abbott's autobiography and the movie. However the book focuses more on Abbott's upbringing and baseball development in spite of his missing hand and is really the point of the book and the reason why every parent, regardless of their child's circumstance, should read this book and learn the empowering lessons of both Jim and his parents.

The anecdotes around his college baseball and Olympic career were a real treat, but so was the overarching story of his no hitter. I normally listen at 3x speed and has no issues with the narration. I also really enjoyed Jim Abbott as the narrator.

For Love of the Game - Part II

If you ever saw the movie "For Love of the Game" with Kevin Costner and Kelly Preston, this book has a similar format. Jim Abbott recounts his life growing up playing baseball and having just one hand in-between while recounting his innings of his no-hitter game he threw against the Indians when he was a Yankees' pitcher. If you like baseball, you will enjoy this book. The title sums it up. It's a great read and inspirational.

Life reveals some of her mystery in this one. Narration by the main character is strong and makes the story that much more real as it’s taken in. The book has a bit of a “Pulp Fiction” vibe with it’s timeline that fuels the concept of the title. In order for it to have a lasting positive impact Jim knew there had to be a success story, yet with integrity, stays true to life. In this sort of timeline we are able to experience the trials and successes, as they complete a person over the more realistic and vast lifespan which gives the listener a more permanent takeaway.The acceptance of Jim’s life calling was not his first choice. His follow through makes him the hero he is. My guess is Jim Abbott inspired as many people as pitched thrown. i’m grateful to Jim, his parents, and the Lord who shared him with the rest of us.

You could not ask for a better story and performance. If you needed something to lift your spirits, this is the book to do just that.

Growing up, I was a Jim Abbott fan. After reading his story, I am taken back into fandom once again. His story is relatable and inspiring, not because it’s feel-good, which it is in parts, but because it’s real. Jim’s story is one of pain and triumph, with a little baseball on the side too. Being narrated by him makes the story all that much more enjoyable. I totally loved this book.

Hearing the story of this guy, I felt like I was really there not just the baseball parts but through out the whole story it was AMAZING!!

I have never read a "sports" story before. I don't even know that much about baseball. I was glued to the story, saddened by the cruelty of others, amazed by his young parents ability to raise such a fine man. I even loved all the baseball stories and sat on the edge with Abbott as he pitched each ball rooting for him all the way!
I enjoyed every minute!

I liked hearing the background and what I believe is the honesty of his story.

A good interesting stiry. lots of life lessons for all. In some ways it was fun to listen to because I remembered some of the games. It is well written. I liked it.

What does Jim Abbott bring to the story that you wouldn’t experience if you just read the book?

Great story. A definite must read.