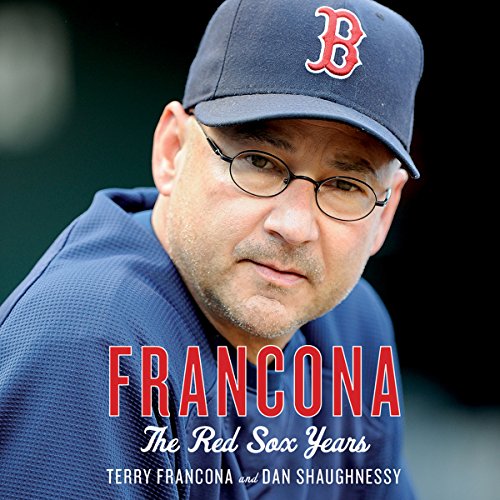 By: Terry Francona,Dan Shaughnessy
Narrated by: Jeff Gurner
Try for £0.00

From famed manager Terry Francona, a lively, unvarnished narrative of his tenure with the storied Boston Red Sox...

From 2004 to 2011, Terry Francona managed the Boston Red Sox, the most talked-about, scrutinized team in all of sports. In Francona the legendary manager opens up for the first time about his eight years there, as they went from cursed franchise to one of the most successful and profitable in baseball history. He takes listeners inside the rarefied world of a 21st-century clubhouse, from 2004 when they won their first championship in 86 years, through another win in 2007, to the controversial September collapse just four years later. He recounts the tightrope walk of managing personalities like Pedro Martinez and Manny Ramirez, working with Theo Epstein and his statistics-driven executives, balancing their data with the emotions of a 25-man roster, and meeting the expectations of three owners with often wildly differing opinions.

Along the way listeners are treated with back-slapping, never-before-told stories about their favorite players, moments, losses, and wins. Those eight years were a wild, unforgettable ride, and now the fascinating full story can be told in an audiobook that examines like no other the art of managing in today's game.

What listeners say about Francona

A great account of his time with the Sox.

Really enjoyable listen. Tito comes across as an everyman's manager, the sort of guy you'd like to work for. It's just a shame the way it ended on such a sour note but a wild ride and a compelling listen nonetheless.

I loved this book. Terry Francona gives you an insight into the Red Sox like no other book before. Amazing what goes on behind the scenes. Absolutely Perfect

I enjoyed it a lot,

Yes, I thought it was interesting. I liked the details of working for such a high profile team.

My favorite character was Terry Francona.

Even for a more casual baseball fan, this is really good.

Fly on the clubhouse wall

Absolutely. Any Sox fan who has felt a little like George Steinbrenner or Bill Veeck has been running things at Fenway for the past few years without quite being able to put their finger on why they have that feeling will find a lot of clarity in this behind-the-scenes look at the ballclub from a manager's-eye-view. Things you may have noticed, without quite making sense of, all add up here. I expected a bit of sour grapes, but Tito's criticisms of the organization all fit with the more-than-casual fan's experiences of the Red Sox over the past decade or so, and he invariably qualifies them with the acknowledgement that the front office and the manager's office have different agendas because they serve different purposes for the organization.

Francona, somewhat obviously. It's good to hear that some of his more seemingly boneheaded decisions were in view of the bigger picture. While it sucks to spend money to go to Fenway on a day the team rolls over, Tito explains why sometimes that's still the best call for the team and the organization.

Not sure if I've heard anything else of his, but the occasional mispronunciations of names - it's "Bill Miller," not "Bill Mueller," regardlesss of spelling - exposes him as someone who doesn't follow the team. Distracting? Not terribly. Could they have found ONE narrator who knows the player names for the Boston Red Sox? I'd imagine so.

This is, overall, probably the most addictive audiobook I've gotten in the past year. If you've been a Sox fan, especially if you've been around for the entire career arc of Francona at Four Yawkey Way, give it a listen. You'll be surprised at how many of these games you personally remember, and at Tito's commentary on those games and the circumstances in which they were played. A really nice fly-on-the-clubhouse-wall book that tempts a lifelong Boston fan to root for the Indians in 2013....especially once you learn about what a nutroll the ownership group for the Red Sox is.

What made the experience of listening to Francona the most enjoyable?

Francona is a family story, about the Francona family, and his baseball family the Boston Red Sox.

The warmth, honesty and intensity expressed by Terry Francona.

A Bronx Tale in Fenway Park.

Like the DeNiro Film, Francona is a baseball purist who has to function in a world run by CEO's, GM's and statistical gurus who try to compromise his belief in the players and the sport.

Which character – as performed by Jeff Gurner – was your favorite?

Tito was the character best performed

I wish I had the time to listen to this in all one sitting. It would be worth the time.

I’m a big BoSox fan and enjoyed the Terry Francona era. Kinda disgusted with the ownership group after this read... I’ll cheer for him we’re ever he goes...

I hav been a life long Red Sox fan and bought this but ok on Kindl but never found time to read it. I loved the Francona Red Sox years and hearing about the Red Sox from Francona's viewpoint was interesting.

Unfortunately, I had troubles listening to all the stories as the narrator came out monotoned at t a and found I would miss out paying attention to the narration. I had to restart Chapters more than once and that made the book less appealing.

I enjoyed it overall and look forward to reading it sometime in the future and hopefully find out what I missed and get more from the book than the narrator gave me.

Must read for all baseball fans.

As usual, if you are a Boston fan like me, you know that every time a manager gets fired from his job, no matter the sport in Boston, an article is written that sheds a very negative light on that person. Francona was no exception. In this book, he tells all. He goes through his playing, and managing career telling the good, and bad. He also tells us what happened in his last season as manager, and how he dealt with players like Manny Ramirez. He also explains what it was like to deal with the Red Sox front office. This is a great listen. You will be surprised with some of Francona's revelations.

I am a longtime Boston Red Sox fan and reading this book brought me back to some of the best (and worst) moments of my adult fanhood. Terry Francona was and still is my favorite manager in MLB. Anyone who respects Tito should read this book. I loved it!!!