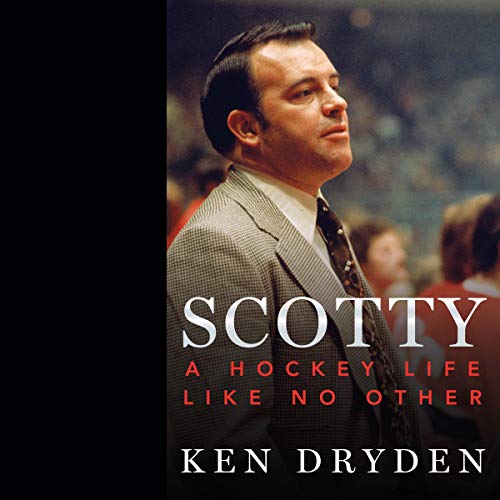 Scotty Bowman is recognized as the best coach in hockey history, and one of the greatest coaches in all of sports. He won more games and more Stanley Cups than anyone else. Remarkably, despite all the changes in hockey, he coached at the very top for more than four decades, his first Cup win and his last an astonishing 39 years apart. Yet perhaps most uniquely, different from anyone else who has ever lived or ever will again, he has experienced the best of hockey continuously since he was 14 years old. With his precious standing room pass to the Montreal Forum, he saw "Rocket" Richard play at his peak every Saturday night. He saw Gordie Howe as a 17-year-old just starting out. He scouted Bobby Orr as a 13-year-old in Parry Sound, Ontario. He coached Guy Lafleur and Mario Lemieux. He coached against Wayne Gretzky. For the past decade, as an advisor for the Chicago Blackhawks, he has watched Sidney Crosby, Alex Ovechkin, and Connor McDavid. He has seen it all up close.

Ken Dryden was a Hall-of-Fame goaltender with the Montreal Canadiens. His critically acclaimed and best-selling books have shaped the way we read and think about hockey.

Now the player and coach who won five Stanley Cups together team up once again.

In Scotty, Dryden has given his coach a new test: Tell us about all these players and teams you've seen, but imagine yourself as their coach. Tell us about their weaknesses, not just their strengths. Tell us how you would coach them and coach against them. And then choose the top eight teams of all time, match them up against one another in a playoff series, and, separating the near-great from the great, tell us who would win. And why.

This book is about a life - a hockey life, a Canadian life, a life of achievement. It is Scotty Bowman in his natural element, behind the bench one more time.

What listeners say about Scotty

A must read or listen for any hockey fan!

An education. Scotty explained and filled in so many gaps in my knowledge of hockey. This book is like visiting the Hockey Hall of Fame!
Thank you Ken. Thank you Scotty 🥂

loved it. drydens voice is brilliant in all his books his love for the game shines through. very interesting

I already read Dryden's other book, The Game, so I knew what I was getting - very vivid storytelling and very Canadian linguistics. This made the experience even better.

Scotty coached many teams so this isn't a book about any one team, you will get lots of hockey history. Since Scotty grew up near Montreal, you can't hate the Habs, 'cause there is quite a bit of talk about them. I am in my 50's, so the teams he talks about are many of the teams I watched growing up. This is a must read for EVERY hockey fan! #LGRW

This is my third Dryden book and I really appreciate the details and substance in his writing as well as his solid reading of his words.

As always, Mr. Dryden has written and narrated a masterpiece about two masterpieces. The epic sport we call hockey and it’s greatest coach, our Red Wings coach, Scotty. You could not ask for a better trifecta of awesome than Dryden, Hockey stories and Bowman. A brilliant look into Scottys life, his mind, and his life. All the little curiosities I had about Coach Bowman are being answered in this book, as are so many great insights in to some of the greatest players in this sport. And, just as in Game Change, Mr. Dryden narration is spot on. Thank you Ken....and Scotty. #LGRW

Great read about how one of the greatest coaches in Sports History thinks the game of Hockey. Even if your not a Hockey fan I highly recommend you pick this one up!

Ken Dryden may be the best author/narrator I’ve yet heard on Audible. His pace is outstanding, and he draws out the exceptional insight that Scotty Bowman’s long term perspective on the game yields extremely well. I’ve spent my life loving this game; rarely have I been so educated about things I’d not paid enough attention to in historical context. Would recommend this to anyone who loves hockey.

Great book on a great coach

Scotty Bowman is considered to be one of the all-time great coaches in all of team sports, with his teams winning nine Stanley Cups spanning a time frame of 29 years between the first (Montreal Canadiens, 1973) and the last (Detroit Red Wings, 2002). He amassed over 1400 regular season wins during his remarkable career and his goalie for five of those championships, Ken Dryden, has written a book on Bowman's hockey life as a player, scout, coach and other duties.

"Other duties" include his current status as a special guest of the Tampa Bay Lightning to their home games. He still attends as many games as he can, goes to his seat in the press box and still takes diligent notes on each game with the chance that he might be able to pass along information to the Lightning staff. That is typical Bowman – always looking for anything that can help a hockey team improve. It is the impression a reader or listener will get after enjoying this book.

Dryden and Bowman will take the reader through decades of hockey history and the name dropping is impressive – Gordie Howe, Bobby Orr, Wayne Gretzky for starters as players he saw but did not coach. As for those he coached on his championship teams in Montreal and Detroit, there are plenty of stories and observations of them, from Guy Lafluer to Mario Lemieux (even though he was the coach for Pittsburgh when they won the Cup in 1992, Bowman doesn't talk a lot about that team, only obtaining the job due to the death of Bob Johnson, so he calls them Johnson's team) to Steve Yzerman.

The book isn't limited to Bowman's championships as he talks about his life before coaching when he was working for Sam Pollack with the Canadiens – later they would become a very successful coach-general manager tandem. He also talks about his time coaching the St. Louis Blues as a brand new expansion team as well as the Buffalo Sabres, who were a talented team under Bowman who could never get over the hump.

One other feature of the book is a "tournament" in which Bowman selects the eight greatest teams he has seen in his lifetime and he breaks each one of them down to Dryden and then eliminates them one by one until there is one team left. No spoilers here as one will have to read or listen to the book in order to find out which team that will be.

Dryden is an established hockey author and his work shines here. At times, there is great detail and I believe that the audio version that I listened to will work better for those who both read physical books and listen to audio books. But whichever version is chosen, one will enjoy this biography of a legendary hockey coach.

Dryden Does it Again

As a fan of Scotty Bowman since the 90’s and only knowing a bit of his earlier storied career it was great to hear how Scotty thought the game. Wish this book was out when I was coaching as it gave me a better thought process of the game and how to approach situations.

This is a man who has seen every player you've ever heard of as a rookie on up. This is a man who is a student of the game in the truest sense of the word. The way this story is told is so much much better than just a biography. It teaches history of the game beyond stats and names, It teaches the evolution of the philosophy of the game and I found myself dying to know who would be champion of Scotty's bracket. awesome!! If you are a fan of any sport, if you play, or coach this is a must read.

Scotty Bowman’s story spans from hockey’s Golden Age of Tge Rocket, Plante and BoomBoom to the present. It is as much a book about coaching any sport at any level as it is about hockey. And while I’ve never really been a fan of hockey books, I love Dryden’s ability to communicate his knowledge, love of a great game and his story telling.