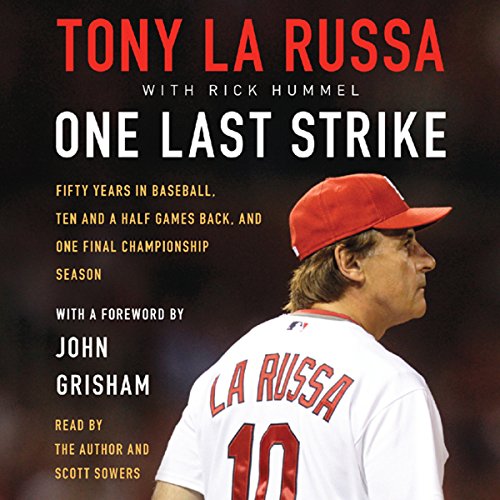 The team that refused to give up their manager in his final season.... A comeback that changed baseball....

After 33 seasons managing in Major League Baseball, Tony La Russa thought he had seen it all - that is, until the 2011 Cardinals. Down ten and a half games with little more than a month to play, the Cardinals had long been ruled out as serious postseason contenders. Yet in the face of those steep odds, this team mounted one of the most dramatic and impressive comebacks in baseball history, making the playoffs on the night of the final game of the season and going on to win the World Series despite being down to their last strike - twice.

Now La Russa gives the inside story behind this astonishing comeback and his remarkable career, explaining how a team with so much against it was able to succeed on baseball's biggest stage. Opening up about the devastating injuries, the bullpen struggles, the crucial games, and the players who made it all possible, he reveals how the team's character shaped its accomplishments, demonstrating how this group came together in good times and in bad to become that rarest of things: a team that actually enjoyed it when the odds were against them.

But this story is much more than that of a single season. As La Russa, the third-winningest manager in baseball history, explains, their season was the culmination of a lifetime spent studying the game. Laying bare his often scrutinized and frequently misunderstood approach to managing, he explains his counterintuitive belief in process over result, present moments over statistics, and team unity over individual talent. Along the way he shares the stories from throughout his career that shaped his outlook - from his first days managing the Chicago White Sox to his championship years with the Oakland A's, to his triumphant tenure as St. Louis's longest-serving manager. Setting the record straight on his famously intense style, he explores the vital yet overlooked role that his personal relationships with his players have contributed to his victories, ultimately showing how, in a sport often governed by cold, hard numbers, the secret to his success has been surprisingly human.

Speaking candidly about his decision to retire, La Russa discusses the changes that he'd observed both in the game and in himself that told him, despite his success, it was time to hang up his spikes. The end result is a passionate, insightful, and remarkable look at our national pastime that takes you behind the scenes of the comeback that no one thought possible and inside the mind of one of the game's greatest managers.

What listeners say about One Last Strike

Insight to the 2011 Cards Magical Season and More

Yes, there will be bias here - I'm a Cardinals fan, and I'm enjoying this book. I'm only on chapter 18, but the book walks the listener through the 2011 season and the subsequent post-season. As expected, LaRussa gets off on (appreciated) tangents which adds to greater insight of the game itself.

This is not just a book about Tony. It's a great course on management by getting buy-in from 25 different personalities and getting the team to focus on EFFORT, not just results. My favorite quote early on is when LaRussa describes winning as a process, not a result.

As you can expect, there are a plethora of stories added along the way. By far my favorite is when his 1996 club (his first year managing the Cardinals) was not buying into his philosophy. During a trip to Chicago, he took some of his veteran players to a Bulls practice. The Cardinals players that went were impressed with the way the Bulls approached their practice (hard and intense). I'm also sure it didn't hurt to see Jordan and Pippen walking up to Tony and calling him by his first name. After that little field trip, the 1996 Cardinals started to turn things around.

Tony read the first chapter, and through the next 17, the other narrator has read the rest. Scott Sowers reads this well, but I wished the two would have alternated chapters.

I suppose the ultimate kudos to a great audio book is when a person decides to read the print version afterwards - exactly what I'll be doing.

Would you consider the audio edition of One Last Strike to be better than the print version?

Insights into baseball and building a winning team.

While a very good baseball book, it also offers valuable insights into leadership and an appreciation of how every individual can play an important role in the sucess of any team, organization or business. The fact that it involved colorful characters from Yadi, Albert, Carp and Freeze; plus that it told the story of the greatest baseball season in the history of baseball (well, at least from a Cardinal perspective), made it extremely enjoyable.

If you could sum up One Last Strike in three words, what would they be?

What other book might you compare One Last Strike to and why?

Which character – as performed by Tony La Russa and Scott Sowers – was your favorite?

Both were excellent Sowers really got into the role..LaRussa spoke from the heart and experience.

For a 4th generation Cardinals fan, this book was beyond sweet! Thank you, Tony, for allowing us insight into one of the most brilliant baseball minds ever!

As a lifelong Cardinal fan Last Strike was a chance of reliving an ultimate classic of a Fall Classic run for the World Series. This time I heard the progress of a truly great team and a great and amazing story from an inside point of view. This book is rich in Baseball history and tactics. Not just a tribute to the 2011 Cardinals, but a deep study on the entire career of a great manager, Tony LaRussa, from a personal and professional perspective. What a true joy it has been to relive this magic moment in baseball history.

As a St Louis fan I wish Tony would have read the whole thing! A good read!

Best of the best

This is the best book I have had the pleasure to have listened to! A truly interesting adventure into the mind and wistom of one of the best baseball managers. I am a St. Louis native which made this a story I was drawn to since Tony was The Cardinals manager for 14 years and it give a great understanding about how he thought and make difficult decisions.
The
One of the best parts was his narration of his book with comments about teams and players he managed.

I highly recommend this book to anyone due to the interesting content. I have listened and enjoyed it twice.

Wish it would have covered a little more of La Russa's overall story, but appreciate what it did share! Loved the little insights in to decisions and actions throughout this season...and that's coming from a Cubs fan!

If you are a baseball fan it is a must listen. A from the dugout perspective of one of the most resilient teams in baseball history and their improbable run to win the 2011 World Series. Only downfall is the narrator (Scott Sowers) needed to do a little more research before recording. He mispronounced several players names throughout. Not a big deal, but a little irritating.