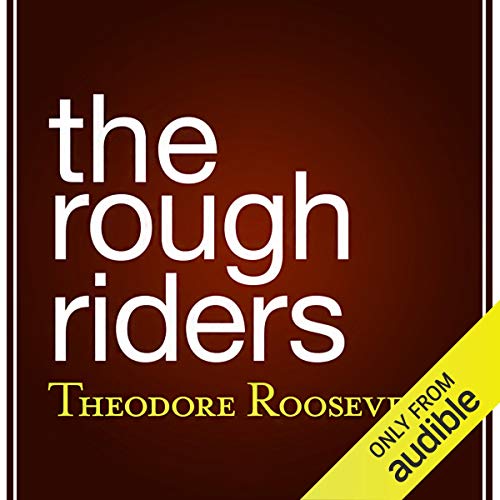 By: Theodore Roosevelt
Narrated by: Brian Troxell
Try for £0.00

In Rough Riders, Theodore Roosevelt recounts the exploits of the 1st United States Volunteer Cavalry during the Spanish-American War. Filled with men ranging from Ivy League athletes to glee club singers and Texas rangers, the Cavalry - nicknamed the "Rough Riders" by journalists - engaged in several famous battles under Roosevelt's leadership. The Rough Riders' most legendary deeds were at the Battle of San Juan Hill, and narrator Brian Troxell's energetic performance matches the excitement of Roosevelt's descriptions.

listeners will feel as though they are sharing a drink with Roosevelt as he happily reminisces about his past days of glory.

Along with Colonel Leonard Wood, Theodore Roosevelt instigated the founding of the 1st United States Volunteer Cavalry in 1898 at the beginning of the Spanish-American War. Nicknamed the “Rough Riders” by journalists, the Cavalry engaged in several battles. This is Roosevelt’s best-selling account of one of the most fascinating regiments in American military history.

What listeners say about The Rough Riders

"We knew not whither we were bound, nor what we were to do; but we believed that the nearing future held for us many chances of death and hardship, of honor and renown."
- Theodore Roosevelt, The Rough Riders

I've been curious to read this memoir/history by TR. Like everything he did, it was written with energy and machismo. He reminds me a lot of my late father-in-law, who was probably born a century too late. My father-in-law was a calvary Colonel who commanded both tanks and helicopters. It is something to see a helicopter colonel stomping around with spurs on and not think a little of Theodore Roosevelt.

The Rough Riders were a band of confederate volunteers made up primarily of cowboys, lawmen, miners, and native americans from the Western territories (New Mexico, Arizona, Oklahoma, and Texas) and sprinkled with athletes and adventurers from Harvard, Yale and Princeton. Through persistence and energy, Roosevelt and his 1st United States Volunteer Cavalry managed to work their way to the point of the spear during the Spanish–American War in Cuba and engaged in the Battle of Las Guasimas, the Battle of San Juan Hill, and the seige of Siege of Santiago.

This episode was one of those early events that helped propel the energetic TR forward in his march to the presidency.

Walk softly and carry a big stick. I love history and Teddy Roosevelt has always been one of my favorite presidents, as well as a hero with the Rough Riders. Definitely recommended reading/listening. Brian Troxell did a fine job narrating.

a.k.a. Hyper-Masculine Americans on Horseback

Diffinitely worth listening to if you need to find some motivation to toughen through the day or experience the gallancy surrounding Teddy Roosevelt's personality through his tour with his adored gang of every type of ultra-masculine American; from Yale athletes to cowboy bounty hunters and Appalachian miners to Cheerokee riders. Although there is not a lot particularly insightful or quotable, except for the famous line in Chapter 2, this account of Roosevelt in Cuba inspires the wanting FOR neediness to perform whatever is needed--no matter how seemingly labourous or mundane--as something to be proud of.

The reader also really comes close to what a young Teddy might sound like, so its extremely immersive.

It's also a little shorter than it feels, as the last 4 chapters are appendices.

this was such a fascinating book. So much I learned about history. my take on Teddy Roosevelt was he would be similar to Trump if he had Twitter available to himself. #Maga

Not sure what I was expecting

Would you try another book from Theodore Roosevelt and/or Brian Troxell?

Would you recommend The Rough Riders to your friends? Why or why not?

I had heard great things about this book, but found it merely interesting. I'm not sure why other readers were so enamoured.

What does Brian Troxell bring to the story that you wouldn’t experience if you just read the book?

Could you see The Rough Riders being made into a movie or a TV series? Who should the stars be?

not bad at all, love TRs writings and the narrator pick for this book was well done.

This book of manly courage, determination and total bad-assery will get you through any tough spot!