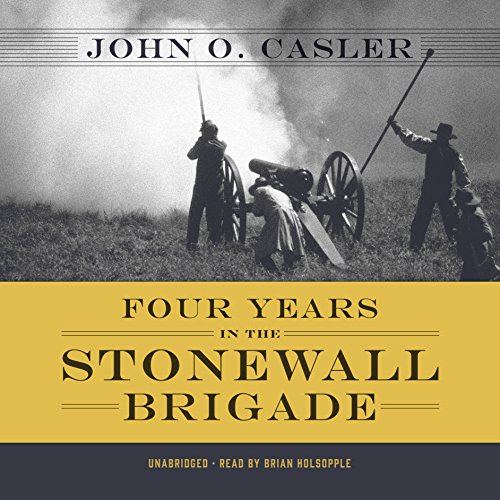 Four Years in the Stonewall Brigade

By: John O. Casler
Narrated by: Brian Holsopple
Try for £0.00

Every memoir of the American Civil War provides us with another view of the catastrophe that changed the country forever. But this is one of the clearest and most informative ever put into audio.

As a commander in Stonewall Jackson's brigade, John Casler experienced all the horrors and comedy of the American Civil War. His time was not so different from his countrymen on the other side, with the exception of point of view.

"I was no secessionist and hoped the trouble would be settled without recourse to arms; but when the war came, I shouldered my musket on behalf of my native state and defended her to the last."

Drawn from his diary at the time, Casler recounts his experiences in the ranks, from marches and looting to nail-biting escapades and the monotony of life as a prisoner of war. Four Years in the Stonewall Brigade is a remarkable account of men in war, graphically bringing to light the challenges they faced on a daily basis.

What listeners say about Four Years in the Stonewall Brigade

For the war gamer or anyone interested in the history of this war this is a must; it will enlighten, entertain and embroider the knowledge already held by any reader.
Very well performed, which, as any listener will tell you is essential, no matter how good the story. Well done everybody concerned and especially Mr Casler for having faith enough to share his thoughts. MJN

I thoroughly enjoyed this book. It put into words, hardships, daring, bravery and comradeship that is difficult for those of us who did not live during this time period. The author's descriptions and the reader's ability to bring those words to life were quite enjoyable and informative to me.

that transcends a simple War Story. Whether by design or just the luck of a natural raconteur, Private Casler manages to enlighten on almost every aspect of a Civil War Soldiers life. His experiences as an infantry man, Pioneer Corps engineer, forger/raider, prospective cavalrymen and prisoner are both amazing and enlightening. His story is told without rancor and in the spirit of reconciliation. This is not a peroration of an unreconstructed savage, but the story of a noble, devoted and patriotic (Southern) American. The PC history revisionists would do well to listen and learn.

Regardless of politics, this is a great book and the performance was excellent. Highly recommended to anyone with interest in that time period.

Great Account of the Civil War. Reads like a story and very entertaining! Vero informative to hear it from a soldier's perspective.

Never understood why treason is celebrated.

If the southern army was that great, then why did they loose the war ?

As someone who always has a book on the Civil War going I found this one particularly enjoyable. The narration was excellent it easy to listen to at any speed and the story itself was fascinating. It gives the soldiers a count of the war glossing over a lot of the battles and instead concentrating on the daily life, but not me, and exploits of the common soldier in and around camp, while fighting, and while forging and straggling.

The story of a Johnny Reb

It was so nice to read about the Civil War from the perspective of a private’s experience rather than a general’s memoirs. I almost passed on this one because the Audible Summary said it was written by a commander. Far from it! Confederate Private John O Casler’s account of his service really gives you a taste of the day to day soldier’s life. He recalls the hardships and drudgery, but also the mischief and and adventures he and his comrades had. I have have extensively read about the Civil War and I am certainly glad I read this man’ story!

Broad overview of life of a soldier in gray

An interesting combination of a sweeping general narrative wrapped up with a series of vignettes of scenes and reminiscences outside of the chronology. Many major battles (Antietam, Second Manassas) are brushed over in a few sentences as Casler experiences were varied. I was surprised to the extent of the time spent away from his unit, both AWOL or detached. It’s a solid supplement of first-person experiences and observations to better understand the ACW soldiers life.

Not What I Expected

On e General Jackson died from his wounds, the story started to slow down.

If you like the Civil War area you'll love this.

This book takes you through the day to day war and movements of troops, and individuals through the eye's of someone there. You'll get a much better understanding of just what the area was like. Transportation, distance's and time consuming travel, side events and even down to personal thoughts and outlooks. At the end it even tells you who served and what happened to them. GREAT job and book for people interested in the area.