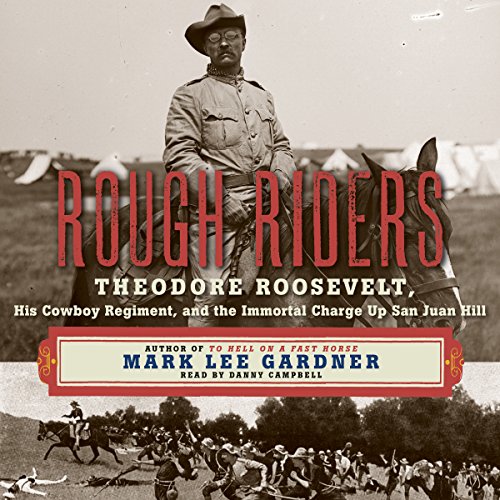 By: Mark Lee Gardner
Narrated by: Danny Campbell
Try for £0.00

The first definitive account of this legendary fighting force and its extraordinary leader, Theodore Roosevelt, Mark Lee Gardner's Rough Riders is narrative nonfiction at its most invigorating and compulsively listenable. Its dramatic unfolding of a familiar yet not fully known story will remind listeners of James Swanson's Manhunt.

Two months after the sinking of the USS Maine in Havana Harbor in February 1898, Congress authorized President McKinley to recruit a volunteer army to drive the Spaniards from Cuba. From this army emerged the legendary "Rough Riders", a mounted regiment drawn from America's western territories and led by the indomitable Theodore Roosevelt. Its ranks included not only cowboys and other westerners but several Ivy Leaguers and clubmen, many of them friends of "TR". Roosevelt and his men quickly came to symbolize American ruggedness, daring, and individualism. He led them to victory in the famed Battle at San Juan Hill, which made TR a national hero and cemented the Rough Riders' place in history.

Now, Mark Lee Gardner synthesizes previously unknown primary accounts as well as period newspaper articles, letters, and diaries from public and private archives in Arizona, Texas, Oklahoma, New Mexico, Boston, and Washington, DC, to produce this authoritative chronicle. He breathes fresh life into the Rough Riders and pays tribute to their daring feats and indomitable leader. Gardner also explores lesser-known aspects of the story, including their relationship with the African American Buffalo Soldiers, with whom they fought side by side at San Juan Hill.

Rich with action, violence, camaraderie, and courage, Rough Riders sheds new light on the Theodore Roosevelt saga - and on one of the most thrilling chapters in American history.

The song "Uncle Cliff" was written and performed by Mark Gardner, copyright 1985.

What listeners say about Rough Riders

Very enjoyable listen. It made me want to bring back words like bully and hoosah

Outstanding in every way.

This is an excellent, exciting history of Teddy Roosevelt and the Rough Riders. One gets a glimpse of a time when men were men and cowardice was detested. It was also a time when the mainstream media was pro-American. This in itself is simply amazing. Rough Riders is definitely a keeper.

Good Emphasis on This Event and The Times

I was looking for a book on the last decade in 19th century American history and this was a great look into the development of one our most revered Presidents. I liked that it briefly covered American foreign policy and how we ended up becoming engaged in the Spanish-American War.

Spot light on the real history.

Excellent indepth history with all the worts of an amazing, colorful and overly hipped figure bursting with what is the American spirit. Sadness are the deaths during the Spanish American war due to the ineptness and glory seeking (very much TR) commanders. Without this well researched work ones grade school notion of that war would be that Roosevelt and the Rough Riders we're the only unit there. That said the RR's were very brave and Roosevelt deserves his place in history and a time we won't see again but, can learn much from it

One of the best audiobooks I have listened to. Not because the audio quality was superb; it wasn't, the performance was though, and the story was as complete as they come. Download it and learn something that all Americans should know.

I really enjoyed listening to this book. I did not know many of the things in the book. I plan on listening to more accounts about Roosevelt. He is the patriarch if an impressive family.

The best of the best in his lifes history.

if you dont know the history of this man. it is an awakening you'll not easy forget.

A fitting tribute to, and lesson in the history of the rough riders, the constant reading of names can wear a bit thin over time until you remember that these are in some cases the names of otherwise forgotten men. The performance is a bit flat but by the middle seems to fit with the book well. As a side, if this book doesn't make you sad at the state of the American presidency then you need to listen again, to think that the United States was once led by such a strong, honourable, hero and here we are with a lying, fraudulent C list reality tv star in the White House.

TR and the charge up the Santiago Heights

Rough Riders clears up many of the myths about the charge up the Santiago Heights. TR and all the men who taught up the heights deserve to be honored by our nation.