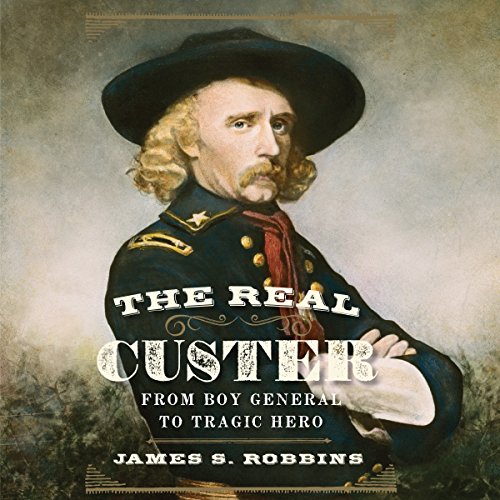 The Real Custer takes a good hard look at the life and storied military career of George Armstrong Custer - from cutting his teeth at Bull Run in the Civil War, to his famous and untimely death at Little Bighorn in the Indian Wars.

Author James Robbins demonstrates that Custer, having graduated last in his class at West Point, went on to prove himself again and again as an extremely skilled cavalry leader. Robbins argues that Custer's undoing was his bold and cocky attitude, which caused the Army's bloodiest defeat in the Indian Wars.

Robbins also dives into Custer's personal life, exploring his letters and other personal documents to reveal who he was as a person, underneath the military leader. The Real Custer is an exciting and valuable contribution to the legend and history of Custer that will delight Custer fans as well as listeners new to the legend.

What listeners say about The Real Custer

I'm not going to finish this book. It was good to get a sense of Custer as a man that was better than his bad press. This author lends him respect, which I found refreshing. However, there just isn't enough of it. By the 5th chapter it's really about the war and his part in it. If that what you're after, this is for you. For me, I wanted more of the private man. Of course, I haven't been fair because I don't have the patience to dig through the bodies to find him.

A Must Read (Or Listen-To)

Entertaining, providing the listener with plenty of information about this colorful American legend, but without bogging down in superfluous details.