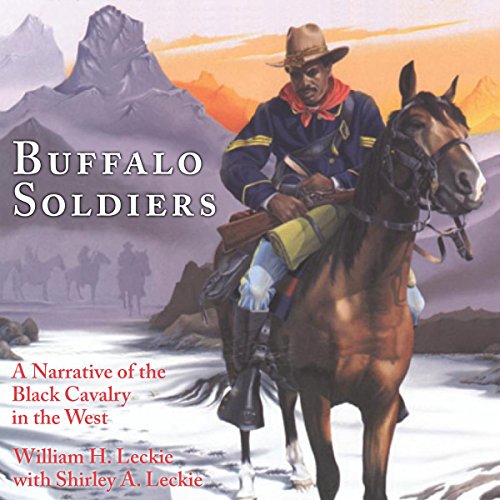 By: William H. Leckie,Shirley A. Leckie
Narrated by: James McSorley
Try for £0.00

The Buffalo Soldiers was the first book of its kind to recognize the importance of African American units in the conquest of the West. Decades later, with sales of more than 75,000 copies, The Buffalo Soldiers has become a classic. Now, in a newly revised edition, the authors have expanded the original research to explore more deeply the lives of buffalo soldiers in the 9th and 10th Cavalry Regiments.

Written in accessible prose that includes a synthesis of recent scholarship, this edition delves further into the life of an African American soldier in the 19th century. It also explores the experiences of soldiers' families at frontier posts. In a new epilogue, the authors summarize developments in the lives of buffalo soldiers after the Indian Wars and discuss contemporary efforts to memorialize them in film, art, and architecture.

"The authors have improved on what was already a groundbreaking study that adds significantly to our knowledge of American expansionism and, more importantly, of African Americans in the West." ( Oregon Historical Quarterly)
"The Leckies...have reinvigorated The Buffalo Soldiers, assuring the title will remain core reading for years to come." ( The Journal of Arizona History)

What listeners say about The Buffalo Soldiers

Son of a Buffalo Soldier.

My father, Trooper Frederick Douglass Jones Jr, was a Buffalo Soldier and a member of the last mounted Cavalry to exist in the Army during WWII. I am a 12 year veteran of the Vietnam War era. I was trained as a Nuclear Engineer in the Navy’s Nuclear Power Program. If it were not for the contributions of the Buffalo Soldiers, I would’ve never had the opportunity to serve onboard three Nuclear Powered Submarines where I was the only Black engineer on all the subs on which I served. The Buffalo Soldiers opened the door to military service for all minorities who came after them.

Dr. Leckie did a great job with his book and it was my pleasure to get to know him before his passing.

Although the Leckie's hit on key moments in time, they do a great job of bringing the book full circle in the epilogue. The ongoing mistreatment of these brave soldiers was summarily dismissed after their campaigns. Another black eye for the USA when it comes to people of color.

this book is an excellent history of the truals,trials, as well as lack of appreciation of the black American contribution in the settlement of the Western United States!!!!

The Misuse of indengant people

After you have been nice to strangers, now they lock you up enslave and take your land, all these indengant people in this book are some very proud and strong people.

A story that puts you in the boots of the soldiers

I would have enjoyed better with map on hand and names/locations of Army Posts.

loved it and I believe it to be historically correct, unfortunately the treatment of Americas Native Indians and the Buffalo Soldiers was disgusting.

Best of the best

This is one of the best black military history books I think every written or the best I've ever read or heard and as a historian I have read many I have another I would categorize as best is Empire of the Summer Moon both are great illustrations or the early western hardships of both sides on the plains of nowhere for some and home for others. These books are very detailed yet not to wordy just very good books.