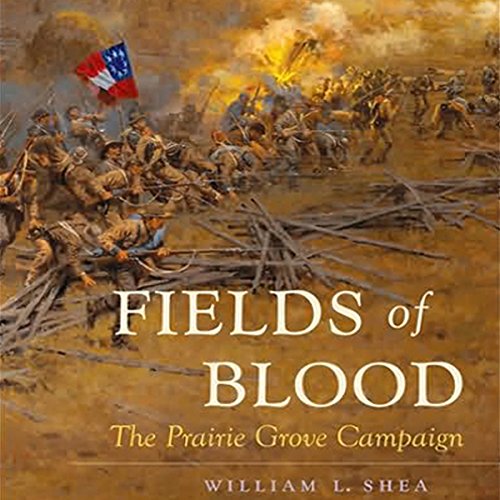 By: William Shea
Narrated by: Jeremy Gage
Try for £0.00

On Sunday, December 7, 1862, two armies collided at an obscure Arkansas hamlet named Prairie Grove in a desperate battle that effectively ended Confederate offensive operations west of the Mississippi River. In Fields of Blood, historian William L. Shea offers a gripping narrative of the events surrounding Prairie Grove, one of the great unsung battles of the Civil War.

Shea provides a colorful account of a grueling campaign that lasted five months and covered hundreds of miles of rugged Ozark terrain. In a fascinating analysis of the personal, geographical, and strategic elements that led to the fateful clash in northwest Arkansas, he describes a campaign notable for rapid marching, bold movements, hard fighting, and the most remarkable raid of the Civil War. After months of intricate maneuvering punctuated by five battles in three states, armies led by Thomas C. Hindman and James G. Blunt met one last time at Prairie Grove. The costly daylong struggle was a tactical draw but a key strategic victory for the Union, as the Confederates never again seriously attempted to recover Missouri or threaten Kansas.Historians have long ignored the complex campaign that ended in such spectacular fashion at Prairie Grove, but it is at last brought to life in these pages.

"The enormous strength of the book is the portrayal of Glasgow in the ‘80s and the religious discrimination, lack of jobs, the housing situation and so on. In addition there is excellent characterisation especially with Paddy ‘leaping off the page’ and her colleagues, ‘Father’ Richards, Dr Pete and Heather Allen also leave a strong impression. Katy Anderson gives this her all, providing a splendid rendition, particularly of the young, gauche Paddy." Karen Meek

What listeners say about Fields of Blood

I have read this book many times and regard it as my favourite account of a civil war Campaign. When the audiobook appeared I snapped it up. I wasn't disapointed. While I already loved this book the narration by Jeremy Gage made it even better!

I cannot listen to this. The narrator sounds like an elementary school student reading aloud for the first time from a lesson he had never seen before. This may be a fine book, but in this format will never be appreciated. Can I get my money back?

The battle of Prairie Grove won the Confederate state of Arkansas for the Union and and saved Missouri which was pivotal to Lincoln's war aims. The author does a masterful job of encompassing all the actions in northwest Arkansas and in Indian Territory. Union generals Blount and Curtis get good marks, Scofield flunks. Hindman as the Confederate commander does a creditible job but is handicapped by poor logistics and terrible weather.

The narrator is difficult to listen to. His delivery is stilted and so many words are mispronounced. His southern dialect is talented, but I had a hard time listening to the Union officers as speaking with a southern drawl. Most obnoxious to the narration is the mispronounciation of Scofield who is called Shofield throughout.
I do expect to revisit this battlefield soon and I will listen to the book again but the fault I found on the first listening is likely to be even more upsetting on the reprise.

Anyone considering the purchase of this audiobook should listen to the exerpt provided. I did not, but wish I had.I found the narrator's bland style to be intolerable. Even worse, since I listen as I drive, I was afraid I might be lulled to sleep as I listened.The emotionless delivery style was bad enough, but the quotations delivered in cartoon-like versions of southern accents were inaccurate and distracting. I ultimately bought the Kindle version of this book and listened to it using text to speech. The robotic voice in text to speech was much more animated than Mr. Fisher's reading and I was spared the phoney southern accents. I recommend the book, which is well written and tells the fascinating details of a period of the Civil War of which I was unaware, even though I grew up in that part of Arkansas.