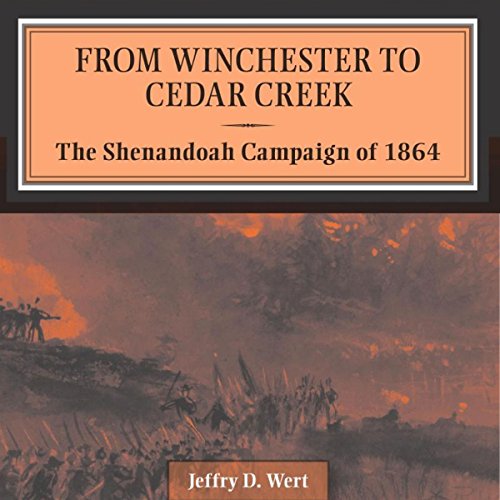 From Winchester to Cedar Creek

By: Jeffry Wert
Narrated by: Trent R. Stephens
Try for £0.00

In the Shenandoah Valley campaign of 1864, US Major General Philip H. Sheridan led his army to a series of decisive victories for the Union over Lieutenant General Jubal A. Early and the Confederate Army of the Valley. In From Winchester to Cedar Creek, author Jeffry D. Wert highlights Sheridan's victories in the critical area of the Virginia valley as defining moments of the Civil War. Sheridan's campaign ensured Confederate defeat in Virginia and ultimately contributed to Lincoln's reelection and the Union's victory in the Civil War.

Drawing on manuscript collections and many published sources, Wert offers vivid descriptions of the battles of Third Winchester, Fisher's Hill, Tom's Brook, and Cedar Creek. The book also explores how the interplay of the strengths and weaknesses of the Union and Confederate commanders, Sheridan and Early, resulted in victories for Sheridan's Army of the Shenandoah. Grounded in detailed research, Wert's compelling narrative portrays the military strategies these commanders employed and how their tactical decisions impacted civilian sacrifice in the valley.

First published in 1987, Wert's chronicle remains the definitive book on Sheridan's command and the Shenandoah Campaign of 1864. Offering a balanced treatment of both Union and Confederate experiences during the campaign, Wert emphasizes its importance as a turning point in the war from both military and civilian points of view.

From Winchester to Cedar Creek not only documents and dynamically recounts the events that unfolded in the summer and fall of 1864 in the Virginia valley, but it also details the political, strategic, and tactical forces that made the Shenandoah Valley campaign so important to the outcome of the Civil War.

The book is published by University of Texas Press.

What listeners say about From Winchester to Cedar Creek