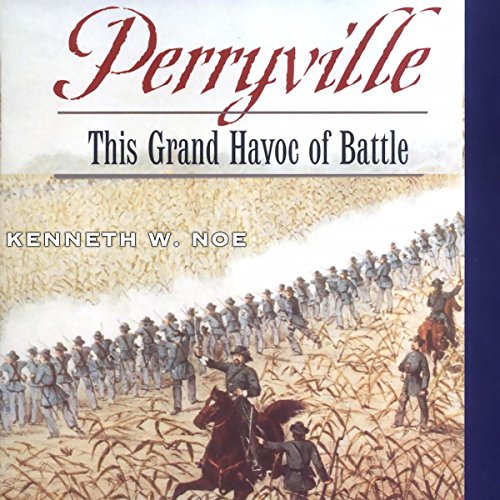 Perryville: This Grand Havoc of Battle

Winner of the Seaborg Award A History Book Club Selection

On October 8, 1862, Union and Confederate forces clashed near Perryville, Kentucky, in what would be the largest battle ever fought on Kentucky soil. The climax of a campaign that began two months before in Northern Mississippi, Perryville came to be recognized as the high water mark of the western Confederacy. Some said the hard-fought battle, forever remembered by participants for its sheer savagery and for their commanders' confusion, was the worst battle of the war, losing the last chance to bring the Commonwealth into the Confederacy and leaving Kentucky firmly under federal control. Although Gen. Braxton Bragg's Confederates won the day, Bragg soon retreated in the face of Gen. Don Carlos Buell's overwhelming numbers. Perryville: This Grand Havoc of Battle is the definitive account of this important conflict.

While providing all the parry and thrust one might expect from an excellent battle narrative, the book also reflects the new trends in Civil War history in its concern for ordinary soldiers and civilians caught in the slaughterhouse.

This book is published by University Press of Kentucky.

"Noe has authored the essential book on this battle." ( Civil War Book Review)

What listeners say about Perryville: This Grand Havoc of Battle

A detailed account of a little known battle which guides the listener through events prior to the battle,the action itself and the subsequent consequences.The battle account is very detailed and does require reference to a map of the field in order to get a better grasp of events.Probably not for the casual listener but a great addition to a Civil War library.

Not a terrible book but far too much verbatim, eyewitness testimony. Not only is this sort of evidence notoriously unreliable but too much of it as here makes the narrative confusing.

And what a narrative - or I should say narration. As is too often the case with audiobooks, again we have here ordinary words mispronounced. I can bear this but not the phony accents. Take a page from the great Grover Gardner: speak clearly and in your own voice. It’s less distracting. Or in this case less unbearable.

And invest in a dictionary - and refer to it when confused about the pronunciation of words that generally any high school freshman could pronounce properly.

Another Good Book Ruined By Narrator

Excellent history of the battle. Well researched, well written, but terribly narrated. For the first half of the book I thought the text was just plugged into google and the automated google bot was reading it back to me. But suffer through the awful presentation because Kenneth Noe brings the realities of civil war combat to life.

Excellent coverage of this not as well-known battle

Absolutely engaging storytelling about one of the stranger battles of the ACW. Excellent prose, extensive setup and in depth biographical information about the players. We listened to this audiobook en route to a visit to the Perryville battleground, and we were not disappointed. We were well equipped to follow the story of the days leading up to this battle, the battle itself, and the very sad aftermath.

A very powerful story of the forgotten battle

As a great-great-grandson of a member of the Illinois 123, this battle effected generations of my family. a great job in telling of this battle that should never be forgotten.

A Good Telling for a much Undertold Battle

The author did a terrific job of capturing the backdrop that led to this important battle. He created a sense of the progression of the battle, the carnage, the violence, the chaos, the havoc,the ineptitude of the generals and the courage of the soldiers. He captured the long lasting impact upon the town and how the Battle of Perryville affected the civil war in it's totality. It is unfortunate that the stories of that battle have not received the attention due. I am a Kentuckians and never once in school ever heard about this battle. Yet its far-reaching consequences cannot be understated. Certainly encourage anybody to read this book about a battle that needs to be told. The performance of the narrator was very very good.His reading accented stories quite nicely without overtaking them.

Well done...excellent ! One of the best battle told stories I have ever experienced !