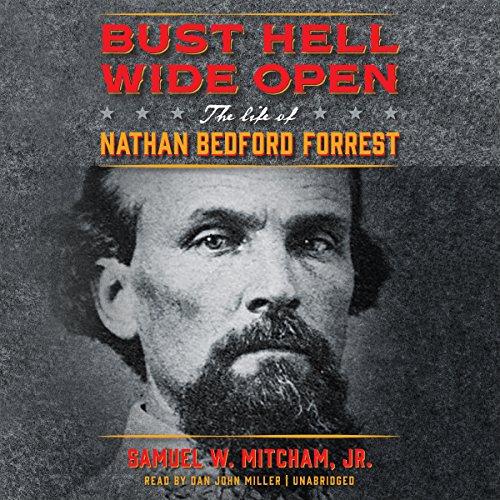 An intimate biography of Nathan Bedford Forrest, arguably the most interesting figure to emerge from the Civil War - widely admired as a military genius.

At 14 he became the head of his impoverished family, responsible for feeding 11 on the rough American frontier. By 39 he had established himself as a successful plantation owner worth over $1 million. And at 40 years old, Nathan Bedford Forrest enlisted in a Tennessee cavalry regiment - and became a controversial Civil War legend.

The legacy of General Nathan Bedford Forrest is deeply divisive. Best known for being accused of war crimes at the Battle of Fort Pillow and for his role as first grand wizard of the Ku Klux Klan - an organization he later denounced - Forrest has often been studied as a military figure, but never before studied as a fascinating individual who wrestled with the complex issues of his violent times. Bust Hell Wide Open is a comprehensive portrait of Nathan Bedford Forrest as a man: his achievements, failings, reflections, and regrets.

A well written book. Highly recommended for anyone interested in authentic historic accounts rather than the usual modern day demonization of the South and of the brave men who fought and died in defense of their homeland. Bedford Forrest, the Wizard of the Saddle, was probably the greatest of the generals on either side of the war, and this book is a good introduction into both his military genius and his character.

Nathan Bedford Forrest, a truly extraordinary man, a great leader of men, an exceptional strategist. Thanks to the author for bringing him to my attention. Thanks to the narrator for his reading, it was well done. I would thoroughly recommend this book to anyone interested in the American Civil War.

A good book if you like great fanfic.
This man should have crushed the north by himself.

you have to give this a listen

fantastic book. what a man. I only purchased out of curiosity. fascinating man. rekindled my interest in this period I'm history. very good book.

No references to any of the questionable thoughts or internal monologues with which the book is littered.

Wizardry in many saddles

This is a really interesting look at the life of a controversial figure from the US civil war. While he must have been difficult to be around, this review is certainly one you’ll want to keep with you for a long time.

This is a superb and concise biography

Of a man most incredibly and unjustly maligned by history. A titan of American history who embodies all the characteristics of western civilization mythological heroes: Courage, tenacity, fortitude, honor compassion, mercy and, Yes, racial enlightenment. Effusive praise? Indeed! And if the courage of General Forest could be exceeded, then the author has done so by bravely ignoring the petty, malevolent Shibboleths of political correctness - presenting the listener with a well researched and exacting work that destroys the hysteria of those who only wish to embrace both fake news and fake history. Highly recommended.

I chose wrong. Knowing nothing, I picked this book by the reviews. Unfortunately those reviewers knew nothing too. This is not a carefully researched biography of Nathan Bedford Forrest. It seems the author admires the mythological version of the general--not the actual man.

This is a shame because the true story of NBF is profound and well worth our study. I listened to 30% before I realized my error, and went looking for something better.

Instead of the relatively shallow treatment offered here, I'd recommend Jack Hurst's biography instead. It's offered on Audible and you'll find it a fuller, more honest, and more rewarding treatment of this great and complicated man.

This is an excellent audio book. It provides a good overview of Forest's military career, tempered by background on his personality and beliefs. It also does an excellent job of showing how his views and beliefs mellowed after the war. If you want a true and accurate picture of this simple, yet complicated man, buy this book. He was a far cry from the racist that modern day liberals would have you believe.

This is the best and most well written biography of Forrest. Unfortunately most people who don’t study history only know and spout the falsehoods about this extraordinary man.

Would you listen to Bust Hell Wide Open again? Why?

Yes if I forgot it

This book draws you in quickly, it's one of the best narrated audiobooks I've listened to, the reader is outstanding. The author is outstanding, he really knows how to draw you in and keep you listening. I can't get enough of it.

One of the Best

Finally! An author who tells the truth and avoids the political correctness curse. Mr. Mitcham has written a magnificent book about the life of Nathan Bedford Forrest.

Perhaps one of the greatest Generals who ever lived. I’m convinced that had Forrest been given the men and equipment, we Southerners would be living in our own free country today. What a terrible mistake the Confederacy made by relegating him to a reduced roll in the Army.

A couple of years ago, my wife and I visited Memphis for a weekend. Sadly, no sign of its Confederate heritage was visible. A tour guide told many stories of what great things blacks had done for Memphis. When I asked about NBF, the guide ignored me.

Mr. Mitcham not only gives Forrest a fair shake, he also give the Confederacy and the KKK a honest and fair assessment. The Klan was started for all the right reasons. Blind hatred by those who have been brainwashed by lies, have caused even those with deep Southern roots to turn their backs on our noble Confederate Ancestors.

I highly recommend this book and this author.

This man went from poverty to riches to eminent, maybe the best, battlefield commander of the war back to poverty. But it’s the arch of a man not a caricature. It’s easy enough to get a negative view of this man in the current culture. I wanted to hear a different perspective. My conclusion is that he was a man of exceeding military talent who fought hard and accepted the outcome of the war. His story is appealing in a credential obsessed world in which natural ability was undeniable.

The performance did have a couple of glitches in which some lines repeated in about 4 places.

I had no idea what to expect from this supposedly wild character and Forrest did not disappoint. This book explains his amazing evolution from hardscrabble childhood to exemplary military leader. It explains how his family had to stick together through desperate poverty and make their own way in life. He developed a steadfast backwoods moral code which at times resulted in violent protection of his family especially the females. It's easy to see how this led to his fierce chivalry and unfailing leadership on the battlefield. The last hour explains the social problems and racial conflicts of the time, including the atmosphere of fear among whites as slavery transitioned and at times was a violent process including rape and murder of whites. There is undeniable evidence that Forrest, in later life, protected blacks from unfair treatment at times to his own detriment. However, if anyone in his presence displayed unfair or unreasonably violent behavior, color did not matter, he would cut them down without hesitation. It's easy to see why some unsavory whites felt the need to bond for protection against slave attacks resulting in the KKK. It's important to remember there were different forms of the KKK, it evolved in a sinister and hateful manner over time. Forrest saw this and rejected this negative evolution. He also found God in later life thanks to Mary his loving wife. The author did an excellent job with a topic innately filled with emotional tension and diffused understanding. He provided a fair and insightful perspective of the hot cultural climate and Forrest's fiery temperament. The narrator was excellent!

I great story of a great man and leader. It is a story of great mental and physical courage and the personal struggles of a misunderstood and misunderstood misrepresented man.

Absolutely fantastic narrative - highly recommended for understanding his facinating life and legacy that continues to be trashed in the media and academia.