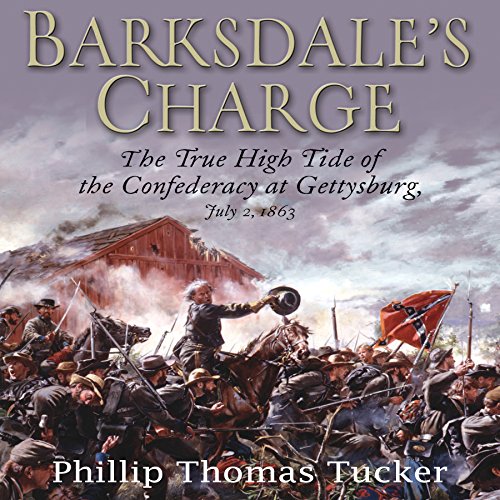 By: Phillip Thomas Tucker
Narrated by: Grover Gardner
Try for £0.00

On the third day of Gettysburg, Robert E. Lee launched a magnificent attack. For pure pageantry it was unsurpassed, and it also marked the centerpiece of the war, both time-wise and in terms of how the conflict had turned a corner - from persistent Confederate hopes to impending Rebel despair. But Pickett’s Charge was crushed by the Union defenders that day, having never had a chance in the first place.

The Confederacy’s real "high tide" at Gettysburg had come the afternoon before, during the swirling conflagration when Longstreet’s corps first entered the battle, when the Federals just barely held on. The foremost Rebel spearhead on that second day of the battle was Barksdale’s Mississippi brigade, which launched what one (Union) observer called the "grandest charge that was ever seen by mortal man".

Barksdale’s brigade was already renowned in the Army of Northern Virginia for its stand-alone fights at Fredericksburg. On the second day of Gettysburg it was just champing at the bit to go in. The Federal left was not as vulnerable as Lee had envisioned, but had cooperated with Rebel wishes by extending its Third Corps into a salient. Hood’s crack division was launched first, seizing Devil’s Den, climbing Little Round Top, and hammering in the wheatfield.

Then Longstreet began to launch McLaws’ division, and finally gave Barksdale the go-ahead. The Mississippians, with their white-haired commander on horseback at their head, utterly crushed the peach orchard salient and continued marauding up to Cemetery Ridge. Hancock, Meade, and other Union generals desperately struggled to find units to stem the Rebel tide. One of Barksdale’s regiments, the 21st Mississippi, veered off from the brigade in the chaos, rampaging across the field, overrunning Union battery after battery. The collapsing Federals had to gather men from four different corps to try to stem the onslaught.

Barksdale himself was killed at the apex of his advance. Darkness, as well as Confederate exhaustion, finally ended the day’s fight as the shaken, depleted Federal units on their heights took stock. They had barely held on against the full ferocity of the Rebels, on a day that decided the fate of the nation. Barksdale’s Charge describes the exact moment when the Confederacy reached its zenith, and the soldiers of the Northern states just barely succeeded in retaining their perfect Union.

What listeners say about Barksdale's Charge

Would you ever listen to anything by Phillip Thomas Tucker again?
I doubt it.

If you could play editor, what scene or scenes would you have cut from Barksdale's Charge?
I would've cut a lot actually. First I'd point out that the author is contradicting himself in the main premise of the book as well as facts. An example of fact, he mentions the fact (multiple times) that the Mississippi brigade was defeated at Malvern Hill and also at Fredericksburg (during the Chancellorsville campaign), both previous to Gettysburg. However he says, also multiple times that the Mississippi brigade was undefeated when they got to Gettysburg.

Any additional comments?
The author did a great deal of research and I liked the detail and first hand accounts of the book, but I didn't like he writing style. His main theory is that the Mississippi brigades charge should be "the real high water mark." But when I finished the book I felt he actually disproved his theory. He says basically of Pickett's Charge that they did get to cemetery ridge, did break the union line, but couldn't maintain their position and had to withdraw. That's true, however he keeps mentioning how close Barksdale was to the ridge and if they got there the south would win a crushing victory at Gettysburg and win the war. However he doesn't seem to take into account, seriously if at all, that the brigade would basically be out of ammunition, without support, in the middle of the union lines with union reinforcements on the way. Had it gotten to the ridge, wouldn't it seem to be reasonable to assume that what happened to Armistead could happen to Barksdale? He seems to believe that the Mississippi Brigade stepping foot on Cemetery Ridge alone would win the war for the Confederacy. I just had a problem with that.

If you had family in the Mississippi brigade then this would be a definite book to read as you can maybe get some idea of exactly what your ancestor saw through the first hand accounts. If you're interested in Gettysburg, then you could get the book by Sears or, my personal favorite, Witness to Gettysburg. I would advise against this otherwise however. He contradicts himself too often and is very repetitive with points and phrases that had me wanting to delete it before finishing.

Fascinating work about Barksdale’s charge that most glance over. Writer did a great job covering all aspects of this part of the battle.

This should have been a short essay.

Barksdale's Charge, The True High Tide of the Confederacy at Gettysburg July 2, 1863 is an awful book that no one should read or listen to. The only redeeming quality of the book is that the book is narrated by Grover Gardner, who has a pleasant voice and an easy to follow along pace. This concludes what I can say nice about this book. I will limit the negatives to informing you dear reader of reviews, that if you eliminate all of the redundancies in this book, you might end up with a pamphlet. There is only so much, Barksdale and his Mississippians are great before one loses interest. If you have read everything else in existence about the battle of Gettysburg and this is the last book that you have unread, you will be happier reading anything else.

Anecdotes are to be found here embedded in an all too familiar history for CW fans. Atmosphere is not achieved due to repetitive analogies ( like a...) and adjectives.