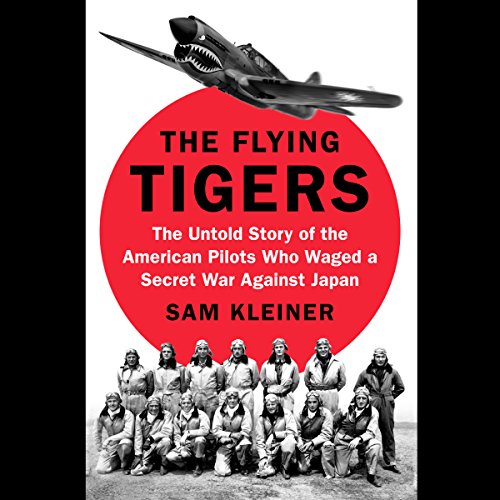 By: Sam Kleiner
Narrated by: Stephen Graybill
Try for £0.00

The thrilling story behind the American pilots who were secretly recruited to defend the nation’s desperate Chinese allies before Pearl Harbor and ended up on the front lines of the war against the Japanese in the Pacific.

Sam Kleiner’s The Flying Tigers uncovers the hidden story of the group of young American men and women who crossed the Pacific before Pearl Harbor to risk their lives defending China. Led by legendary army pilot Claire Chennault, these men left behind an America still at peace in the summer of 1941 using false identities to travel across the Pacific to a run-down airbase in the jungles of Burma. In the wake of the disaster at Pearl Harbor, this motley crew was the first group of Americans to take on the Japanese in combat, shooting down hundreds of Japanese aircraft in the skies over Burma, Thailand, and China. At a time when the Allies were being defeated across the globe, the Flying Tigers’ exploits gave hope to Americans and Chinese alike.

Kleiner takes listeners into the cockpits of their iconic shark-nosed P-40 planes - one of the most familiar images of the war - as the Tigers perform nail-biting missions against the Japanese. He profiles the outsize personalities involved in the operation, including Chennault, whose aggressive tactics went against the prevailing wisdom of military strategy; Greg “Pappy” Boyington, the man who would become the nation’s most beloved pilot until he was shot down and became a POW; Emma Foster, one of the nurses in the unit who had a passionate romance with a pilot named John Petach; and Madame Chiang Kai-shek herself, who first brought Chennault to China and who would come to visit these young Americans.

A dramatic story of a covert operation whose very existence would have scandalized an isolationist United States, The Flying Tigers is the unforgettable account of a group of Americans whose heroism changed the world, and who cemented an alliance between the United States and China as both nations fought against seemingly insurmountable odds.

“In the dark days after Pearl Harbor, a swashbuckling band of volunteer pilots gave America something to cheer about with their exploits against the Japanese in far-off China. Through long-lost letters and diaries, Sam Kleiner has brought these gallant warriors to life. The Flying Tigers is a rousing tale that will keep you turning the page.” (Evan Thomas, New York Times best-selling author of Sea of Thunder)

“This is a movie waiting to be made - a great adventure story that is all the more gripping because it really happened. These pilots remind us of why we’re proud to be American, ordinary young men who became heroes at a time when American victories were scarce. Some were killed, leaving their hometowns grieving. Some spent years as prisoners of the Japanese, uncertain whether they’d ever make it home again. All should be remembered. Kleiner is a gifted researcher and storyteller. He does the story of these men justice, and that is saying something.” (Michael Punke, number-one New York Times best-selling author of The Revenant)

“The Flying Tigers is a meticulously researched work of history that reads like a thriller. Packed with characters that come off the pages, it draws the reader into a world of dare-devil flying and covert operations in China in the opening days of World War II. The Flying Tigers marks the debut of an incredibly talented new historian and is a must-read not only for World War II aficionados but for anyone who likes a good story. It is full of them.” (Amy Chua, Yale Law professor and New York Times best-selling author of Battle Hymn of the Tiger Mother and Political Tribes)

What listeners say about The Flying Tigers

In the 21st Century, WW2 historians should gain access to archives from all sides, and then use this information to illuminate how each belligerent chose the actions that they did. Outstanding examples from the Pacific War are Zimm’s Pearl Harbor study, or Parshall/Tully’s Shattered Sword, a terrific examination of Midway. One could add Lundstrom and Claringbould to this list, with their detailed cross-analysis of Japanese and Allied flight records.
Unfortunately, Sam Kleiner does no such heavy lifting. Instead, his re-telling of the Flying Tigers story is a one-sided “Noble Americans vs. Evil Japanese” version of the tale. He never mentions who the Japanese commanders and pilots were, nor describes the aircraft that they flew in any detail. They are instead just a faceless brutal enemy who exist only as counterpoint to the brave actions and pure motivations of the Americans. Exacerbating this slanted perspective is the fact that reams of data now indicate massive aerial-kill overclaiming by all sides during the war. In spite of this well-established phenomenon, Kleiner doggedly chooses to accept at face value the inflated claims made by American mercenary pilots without bothering to cross-check these against Japanese records. That choice serves to further valorize the Flying Tigers by presenting their lopsided overclaim-tainted kill-ratio as historical certainty. Such determined hero-worship appears to be Kleiner’s primary motivation for writing this book, and he allows it to overshadow disciplined research.
In these ways, his work reminded me of older WW2 histories that I read as a kid back in the 1970s, all rah-rah and “ Go USA!” in tone. if cheerleading “our” team is the sort of presentation that you’re looking for, then this book will work for you. However, if you want a more nuanced study of this period that also tries to comprehend the motivations and experiences of the Japanese, then you should steer clear of this jingoistic back-patter.

The oral history I grew up hearing directly from 3rd Squadron Wingman Catfish Raine is alive in this book. Well written, missing a few nuggets of history, but overall excellent. An amazing adventure that became a campaign to save a people.

A moving testimonial to a great group of individuals!

I found this book to be an awe inspiring tribute to a group of individuals that had achieved great fame, but the fame was largely mythic until now. To have the actual story brought to life in great detail with all of the human failings attached to such a heroic endeavor was enlightening and informative. It is another example of the achievements by our greatest generation. This book allows that legend may live on.

loved it .... a time capsule of a story taking you back to the very beginning of an adventure for young pilots...before, during and after ww2

I have read several books on the Flying Tigers and the China Burma India theater. The best of which is Barbara Tuchman’s epic “Stilwell and the American Experience in China”. Too bad Kleiner is not the historian that Tuchman was (who is? she was one of the great historians of the 20th century). My sense is that Kleiner is more of a Google researcher than a serious historian because that’s the way the book reads. Of course it’s a great saga but this book is more of a survey of contemporary news clippings than an original historic record. Chaing Kai Shek and Claire Chennault come off as heroes which is contrary to Tuchman and Stilwell. Who lost China? Clearly it was the Chinese Nationalists. Chennault was their lackey and stooge whose drumbeat to FDR and anyone who would listen was “without China threatening Japan on the Western Front Japan would have been free to defeat the Marines across the Pacific”. Maybe. Consider Stilwell’s perspective; if Chaing’s 99 divisions would have taken the offensive and stopped hoarding American military largesse for future civil wars, would the Navy-Marine island hopping campaign been as long and costly. If the B29 raids had come from China and sooner could the war have ended sooner? Tuchman’s Stilwell believed that was the lost opportunity.
Chennault felt betrayed because he was not given advanced notice of the Doolittle Raid on Tokyo. He was so blind by Chaing (or was it Madam Chaing?). That he didn’t see the wisdom of keeping this secret from the leaky sieve that was the Nationalist political caldron. Four stars is plenty. Oh and the narrators performance was poorly matched to the author’s text. It is flat, deadpan and lacks zest.

The flying tigers is a fascinating listen! I learned so much about this often overlooked history. Book is well written, with fun anecdotes throughout that make you feel like the flying tigers are old friends.

Well written and well read! You can picture the events unfolding as they are being told as if watching on the big screen. The excitement of the story draws you in and leaves you anxious to get back to when you have to stop listening. Great book and should be made into a movie!

Great story. Not easy to pay attention to as some other aviation stories but it was worth reading a subject that not everyone knows about.

Excellent book. I had recently finished the book by Greg "Pappy" Boyington, which included many references to his days with the Flying Tigers. This book helped to fill out the story of the legendary group. I really enjoyed it and learned a lot about their daring exploits.

What a history lesson on an incredible group of volunteers. Could not stop listening.