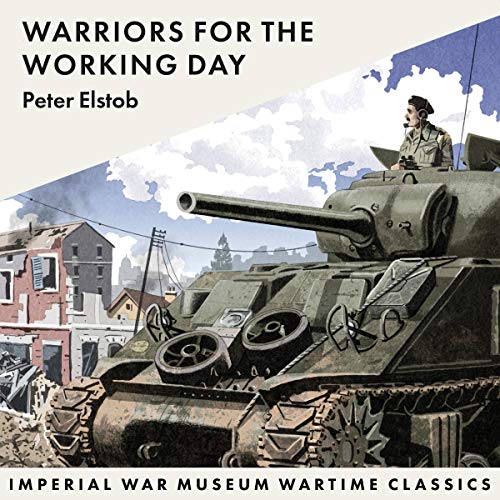 Warriors for the Working Day

By: Peter Elstob
Narrated by: Tom Lawrence
Try for £0.00

May 1944, the Royal Armoured Corps prepares for the invasion of north-west Europe. Young and conscientious, Michael Brook is quickly promoted to tank commander. He must overcome not only his own fear, but the dissent and doubts of his ever-changing crew, as the war takes them over the Rhine and into Germany. The men encounter both jubilant civilians and stiff enemy resistance as the conflict exacts a heavy toll.

Based on Peter Elstob's own wartime experience, Warriors for the Working Day brilliantly evokes the particular ferocity, heat and terror of tank warfare. This new edition of a 1960 classic features a contextual introduction from IWM which sheds new light on the true events that so inspired its author.

"Few other novels of the war describe the grinding claustrophobia, violence and lethal danger of being in a tank crew with the stark vividness of Peter Elstob. It's possible to almost smell the fumes and sweat, while the intimate detail of operating such a beast and the camaraderie of the crew are utterly compelling. This is a forgotten classic that deserves to be read and read." (James Holland)

What listeners say about Warriors for the Working Day

Excellent but with a caution

I've loved this book since I first read it back in the 70's and it's a joy to find it here. The performance is excellent and brings the characters to life. Obviously history has expanded on the events depicted but notwithstanding that the novel depicts events as the characters see them at the time.

However there is a big complaint with the ridiculous preface that's been stuck on by someone at the start of the narrative. Leaving aside some of the hopeless generalisations the IWM feel the need to make the preamble goes on to tell you what you're about to hear whilst telling the outcome of various events to individual characters. Utterly stupid. Skip the preface and listen to it once you've finished the excellent book.

Great book on my father's recommendation

The technical writing ability isn't up there with the greats but the story is solid and the characters very well formed. You can tell its been written with first hand experience. It really put me in the mindset of a tank commander as best it could. They address severe PTSD and battle stress in this book which is novel for the era. A man being a bit windy was on the edge of a mental breakdown. What a generation they were. I truly hope the only tanks my son ever plays with are plastic.

It could all have happened ...

This is a novel ... fiction, but the story could well be true. It's the story of one young man's wartime experiences as a radio operator and tank commander as the Allies fight from Normandy to Germany. The author writes in the style of C S Forester and it's a gripping narrative that carries you along in the tank with the main characters. I really enjoyed it.

A riveting, multi-dimensional story which embodies, as far as I know, a real storyline with a deep depth of understanding of human courage, determination, fallibility and weakness. It is masterfully read by an accomplished voice actor. Thoroughly recommended.

not really my thing fiction, I prefer non fiction. But ok for a story.

Great story based on experience

a great book telling of the tough claustrophobic life of a tank crew, worth the listen.

A great insight into the life of tankers in WW2.

fantastically narrated and great descriptions of the life of a crew of British tankers facing down the German tanks and soldiers. Well worth listening