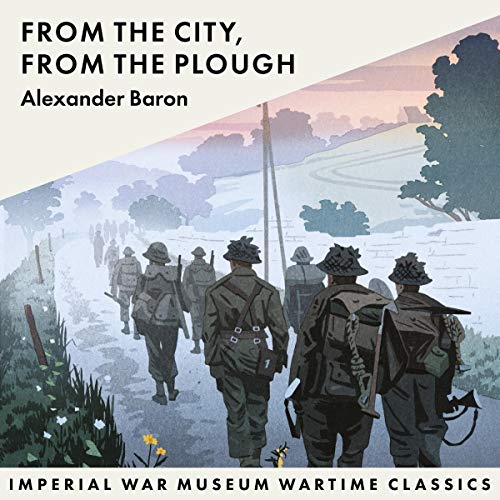 From the City, from the Plough

By: Alexander Baron
Narrated by: Matt Addis
Try for £0.00

Spring 1944, the south coast of England. The Fifth Battalion, Wessex Regiment, wait patiently and nervously for the order to embark. There is boredom and fear, comedy and pathos as the men all drawn from different walks of life await the order to move.

With an economy of language that belies its emotional impact, From the City, from the Plough is a vivid and moving account of the fate of these men as they embark for the beaches of Normandy and advance into France, where the battalion suffers devastating casualties.

Based on Alexander Baron's own wartime experience, From the City, from the Plough was originally published to wide acclaim and reportedly sold over one million copies. This new edition of the 1948 classic includes a contextual introduction from IWM which sheds new light on the dramatic true events that so inspired its author.

What listeners say about From the City, from the Plough

A sobering and uplifting tale

As someone who doesn't usually read war stories, I was riveted by and thoroughly enjoyed this book. The introduction does a fantastic job of bringing home to you how special it is, a second world war story that is utterly of it's time, with the real war experience of the author clear in everything the men go through and their responses to it. Addis's narration is perfect, giving individual voices and character to everyone we meet, and managing to convey the huge range of emotions Baron has forced his battalion to endure. We follow the 5th Battalion through training in England, to Dday, and into France, and though the battalion is fictional, the scenarios they face are all very very real.
Having finished it, I'm feeling a little melancholy- as a child of the 90s it's not often I'm properly reminded of the realities of WW2.
A sobering and uplifting tale, would highly recommend.

brilliantly read and a great story that gives an insight into everyday life in the British army in a way that's only usual narrated from the perspective of the US.

I’ve listened to or read a lot of war literature and this is without doubt among the very best if not the best. Beautifully written and very moving. It is superbly read, and the narrator captures the regional accents magnificently. It’s a bit like a British version of James Jones’s Thin Red Line. I cannot recommend it enough.

Well written, uncomplicated, linear.
The atmosphere of the allies at war really good. The camaraderie, and yet the full horrors, of war all there.
A great read.
And narration top drawer.
I'm sure I'll listen to this again sometime.

A novel which simply reflects war for it is. No pseudo intellectual word play masking the horror. Just a straight forward narrative of a individuals caught up in conflict. The crushing burden of command and responsibility and simple human desire to survive. Should be stood up as an example of classic British literature.

The utter waste of War

A book that makes you think and reflect. Especially with the scourge of war in Europe again.

Heartbreakingly entertaining to the very last...

Found the book by accident and decided to give it a shot. Was engaged from start to finish and despite its rather short length it was worth the full credit spent.

WWII's All Quiet on the Western Fron

A sobering and realistic portrayal of a fictional battalion, The 5th Wessex, from when they are first formed to well past D-Day. A wonderful performance bringing the individual characters to life and making their hardships that much more impactful. Well done. Highly recommend.

A beautiful book on the realities of a soldier

stated as a novel but in fact a thinly vailed memoir of part of the authors war time experience. the 5th Wessex which is the fictional company of the book is actually based on the 5th wilchers. it's tells a beautiful and heart wrenching tales of soldiers there commanding officers and the struggle they all face. this is one the best war novels/memoirs I have ever read/listened to. it's willingness to showcase the reality of war not Hollywood lies that are portrayed in so many books and film. I can say without a doubt that any one interested in the second world war or any war should read this book to gain a greater understanding of the true struggle these fighting men must and have overcome in the past present and even future.

There's nothing like the books from the Imperial War Museum wartime classics. Though fiction, they create a visceral feel that takes the reader along with the men. "From the City, from the Plough" is one of the best. War, relationships, desertion, and the D-Day campaign are all covered in this most amazing story by Alexander Baron, who would know better than anyone the experiences of a British soldier. These books feel so current and fresh. What an enjoyable read. And Matt Addis does amazing narration.