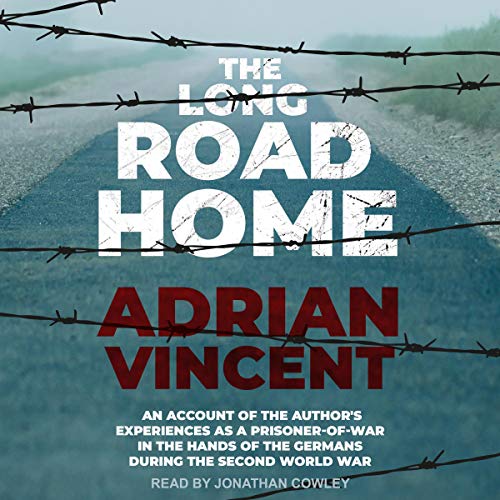 By: Adrian Vincent
Narrated by: Jonathan Cowley
Try for £0.00

The honest account of one prisoner-of-war’s struggle to survive through five years of Nazi imprisonment. An essential book for listeners of Horace Greasley, Alistair Urquhart, and Heather Morris.

On a cold May morning in 1940, Adrian Vincent arrived in France with his battalion. His war didn’t last long. Within five days the Siege of Calais was over, and nearly all his comrades were killed, wounded or, like him, taken prisoner. After a brutal journey across the breadth of Germany, Vincent and his fellow survivors began their life in Stalag VIIIB, set to work in terrible conditions down a Polish mine. For the next five years, they waged a war not against enemy soldiers but instead versus monotony, disease, cruelty, starvation, and hopelessness.

“The most honest prisoner-of-war story I have read in the last 10 years.” (Leicester Mercury)

“Mr. Vincent has the admirable intention of entertaining the reader, and this he does very successfully. His style is deft and concise. He has a nice wit and his characters emerge as life-like and life-size figures.” (Times Literary Supplement)

“Vincent tells his story with humour, sympathy, and observation.” (The Sphere)

The Long Road Home is a remarkably truthful memoir of what it was like to be a prisoner during the Second World War. Vincent does not portray himself or his comrades as heroes, but instead what they really were: survivors.

What listeners say about The Long Road Home