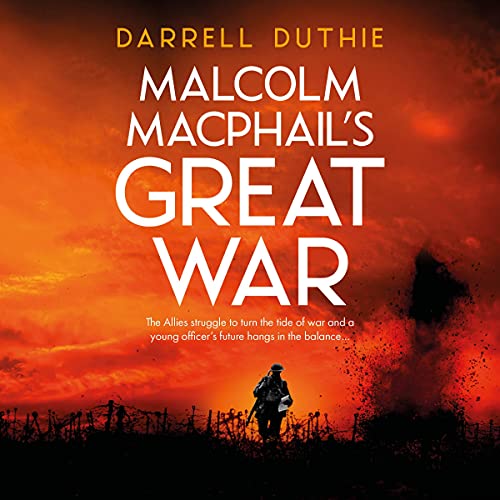 By: Darrell Duthie
Narrated by: Adam Sims
Try for £0.00

Fall 1917. The Western Front is in stalemate.

Captain Malcolm MacPhail of the Canadian Corps has been in the trenches for longer than he cares to remember. He's just landed a new job on the intelligence staff, but if he thinks staying alive is going to become any easier, he's sorely mistaken.

The rain is pelting down, the shells are flying and the dreaded battle for Passchendaele looms. Malcolm reckons matters can still get worse. Which proves to be an accurate assessment, especially as his unruly tongue has a habit of making enemies all on its own.

The Allies are fighting desperately to swing the tide of war, and Malcolm's future hangs in the balance, so keeping his head down is simply not an option....

Read by Adam Sims, audiobook Narrator of the Year (2017, UK)

"The concept of trench warfare...is a prominent theme in this very readable work of 'faction'.... The friction between HQ politics and the front line resonates throughout this tale. All in all, it is an enjoyable read." (Soldier Magazine, magazine of the British Army)