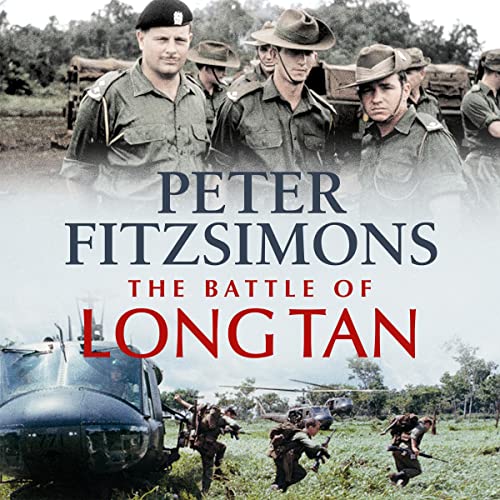 The Battle of Long Tan

By: Peter FitzSimons
Narrated by: David Tredinnick
Try for £0.00

From the bestselling author of Kokoda and Gallipoli comes the epic story of Australia's deadliest Vietnam War battle.

5.01 pm: Enemy...penetrating both flanks and to north and south.

It was the afternoon of 18 August 1966, hot, humid with grey monsoonal skies. D Company, 6RAR were four kilometres east of their Nui Dat base, on patrol in a rubber plantation not far from the abandoned village of Long Tan. A day after their base had suffered a mortar strike, they were looking for Viet Cong soldiers.

Then—just when they were least expecting—they found them. Under withering fire, some Diggers perished, some were grievously wounded, the rest fought on, as they remained under sustained attack.

For hours these men fought for their lives against the enemy onslaught. The skies opened and the rain fell as ferocious mortar and automatic fire pinned them down. Snipers shot at close quarters from the trees that surrounded them. The Aussie, Kiwi and Yankee artillery batteries knew it was up to them but, outnumbered and running out of ammunition they fired, loaded, fired as Viet Cong and North Vietnamese Army forces just kept coming. And coming.

Their only hope was if Armoured Personnel Carriers (APCs) could reach them before they were wiped out. The APCs did their best but low cloud and thunderstorms meant air support was stalled. A daring helicopter resupply mission was suggested but who would want to fly that? The odds against this small force were monumental...

By far the deadliest battle for Australian forces in Vietnam, the Battle of Long Tan has a proud place in the annals of Australian military history—and every ANZAC who fought there could hold his head high.

Peter FitzSimons, Australia's greatest storyteller, tells the real story of this classic battle. He reveals the horror, the bravery, the wins and the losses that faced our soldiers. He brings to life the personal stories of the men who fought, the events leading up to that memorable battle and the long war that followed, and the political decisions made in the halls of power that sealed their fates. The Battle of Long Tan is an engrossing and powerful history that shows the costs of war never end.

What listeners say about The Battle of Long Tan

a really good book! very in depth, and almost gives you a good feel for what the men were like who fought there. and very well read

Well read by an engaging narrator, and a story about a little known Vietnam battle, make this book a compelling listen. There are a few headwinds which faced me in listening, however. I won’t belabor the points: first, I am a US service member and veteran. I deeply resent the blatant disrespect and disregard for all things “Yank” in this work. There aren’t many examples but from the Johnson Administration down to grunts being lazy and unskilled, uncommitted dolts relying solely on technology, it is distracting. Second, it has taken more than ten hours of the book to even get to the battle. The book is mistitled; it should be “The Australian Army in Vietnam and the Battle of Long Tan”. I like reading about individuals and their experiences, but half the book before any combat whatsoever?

Great Read - Best of All Long Tan Accounts So Far

Peter FitzSimons has again presented a significant piece of history via a well-crafted and highly engaging story. David Trefonnick’s narration also does the account justice, though I’d recommend he defer to alternative sound effects for bugles, renditions of ‘Danny Boy’, or anything else requiring more than straight oratory. Fortunately, I had the Kindle edition to finish the offending passages without audio.

All-up, a great investment in time and money!

Factual reporting of the whole story

An unmatched military achievement while the US floundered with inept politicians trying to micro manage the military.

One of the best from Peter FitzSimons and superbly narrated by David Trendinnick. Fitz steps thru the journey of how Australia finds itself in Vietnam and then to the battle on Long Tan. This book is a tribute to the men and families of Delta company 6 RAR & their supporting services who, against an overwhelming enemy strength, managed to to 'seize and hold ground'. Fitz is 'spot on' with Australian humor, army 'slang' and tells the story from the diggers perspective, their leaders, their family's and also from their enemy.. I highly recommend this book.....

Well worth the effort

It took me a little bit of effort to get into the story because of the narrative style but I am happy I stayed with it. I am familiar with the battle of Long Tan from previous readings but this version made the soldiers become real to me. Well done Mr. FitzSimons.