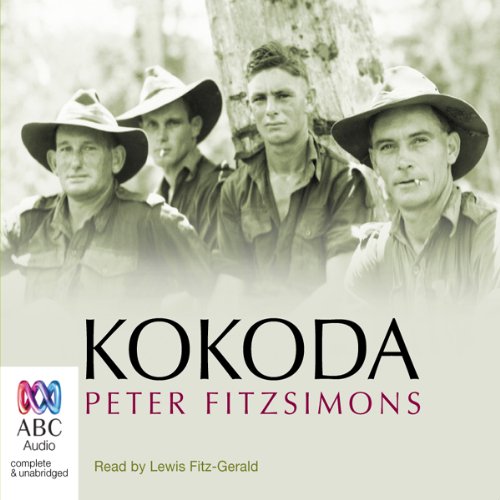 By: Peter FitzSimons
Narrated by: Lewis FitzGerald
Try for £0.00

For Australians, Kokoda is the iconic battle of World War II, yet few people know just what happened and just what our troops achieved. Now, best-selling author Peter FitzSimons tells the Kokoda story in a gripping, moving story for all Australians.

Conditions on the track were hellish - rain was constant, the terrain close to inhospitable, food and ammunition supplies were practically non-existent, and the men constantly battled malaria and dysentery, as well as the Japanese. Kokoda was a defining battle for Australia - a small force of young, ill-equipped Australians engaged a highly experienced and hitherto unstoppable Japanese force on a narrow, precarious jungle track - and defeated them.

What listeners say about Kokoda (by Peter FitzSimons)

Would you listen to Kokoda (by Peter FitzSimons) again? Why?

Yes
An incredible tale of human endurance and fortitude

What other book might you compare Kokoda (by Peter FitzSimons) to, and why?

Torbruk was similarly inspiring. This writer rates equal to the other great military history writers such as Ambrose and Hastings

Accent gave credence to the story

Completely captivated listened to this intensely whilst driving on holiday over 2 days.
Absorbed into the moment throughout and left at times as exhausted emotionally as those being spoken about. A great listen.

it's a great story and very detailed. I felt like it was easy to understand how the battle happened. the writing itself however is a little too emotional and bais opposed to stating the facts.

I had never heard of Kokoda before listening to this book. That is a shame. I am not likely to forget the name now. This is one of the more amazing chapters in the annals of war.

It is very much a story of the indomitable spirit of common soldiers called upon to perform impossible tasks with inferior equipment, little or no training, some of the worst terrain in the entire world and stupid, pig-headed leadership at the highest level. FitzSimons does a fine job of keeping us engaged with the narrative even as the action of the men on the ground is reduced to an interminable, repetitious slog between indefensible positions which are held in the face of overwhelming odds and casualties only to be given up as the serial holding actions continue. He does this by giving us detailed and moving accounts of individuals and etching in our minds indelible images of moments of extraordinary heroism and gallantry. Nor does he fail to include Japanese participants among these glimpses of war's exquisite anguish. In addition we are regularly taken to the rear to witness the unpardonable, ego-driven pig-headedness of MacArthur and the Australian high command which failed the troops in almost every way.

This is an account made all the more gripping because it played such a pivotal role in turning the tide of the Japanese expansion in the South, holding the door shut while the U.S. put Marines in place on Guadalcanal where they would dig in to face their own ghastly ordeal. Without Kokoda, there would have never been a victory at Guadal and the war would doubtless have lasted significantly longer. The poorly trained, unprepared, mostly unsupported men of the Australian home defense forces at Kokoda deserve to be remembered with reverence, and this book tells their story brilliantly. I highly recommend it.

A Tribute to Fighting Australians

This rendition kept me awake all night, with tears of sorrow and chest pumping pride.

Despite the petty politics of the 'high ups' these few men were there to do a job. Stop the Japs. They did, but at a cost.

This book is about mate-ship and lost mates. It makes you proud to be Australian to learn more of the New Guinea campaign's details and the privations endured by our fathers and grandfathers in support of their families back home.

It seems appropriate to write a review of this title on Australia Day. FitzSimons tells a familiar historical tale of the misuse of Australian troops by persons far away and without adequate appreciation of the facts as they were at the battleface. Like many stories of former gallantry, there is a sense of the inevitable and of the unnecessary. FitzSimons captures all of this and more. He is unflattering in his condemnation of criminal negligence, whether it was Blamey's or McArthur's. He is patriotic to a fault and respectful of the Digger and the Digger's duty to his mates. He tells the story, often in the first person, relying on interviews with survivors, diaries and other contemporaneous records. It reads like a novel in parts and a documentary in others. At times it choked me up, but it often made me smile. It is a strange thing that one can be proud of some much bloodshed. That said, if the book has a failing, it is that it is a wee bit too empathic for me and, I suspect many Australians, preferring as we do to let the result speak for itself and not boast about it. Of course there are exceptions, and FitzSimons might have found a valid one here.
As for FitzGerald's reading, I thought it an outstanding performance from an accomplished artist. He captured the fervor, the frustration and the brutality, and his nuance was pitched perfectly. I loved the use of the 1940's Australian idiom (now, sadly, dying) but I thought the use of an echo on many of the quotations was an unnecessary dramatic device. I liked the Chapter divides military segue. I note that the new edition of the hardcopy contains an Afterword that is not in this production, but which is short and could be read in the bookshop waiting in line!
I think this is an important read for most Australians. I was heartened to see from the reviews on this site that it struck a chord with many others, too. I would be interested to know how it has been received in a Japanese market because, although critical of Japanese brutality (to themselves and others), it is respectful of those unfortunate men of both sides that gave their lives to hold or take a sod of mud in a jungle far from their homes.

The Aussies in New Guinea

If you could sum up Kokoda in three words, what would they be?

What does Lewis FitzGerald bring to the story that you wouldn’t experience if you just read the book?

This would be a fabulous movie. It needs to be made. It would be expensive but no more so than The Red Line, which was rather a disappointment. There are many talented Australian actors who could play the parts. In the hands of the right production team this is a potential Oscar winner for sure.

What We Americans Don't Know about the War in the

Would you listen to Kokoda again? Why?

Yes it is a good story/history of the trials and heroic deeds of the 2nd AIF.

Yes but there is no way to do it in one sitting, but the book will keep you interested

History of a campaign that is all but forgotten, thanks for retelling the history of the AIF in the Pacfic.

The 39th Battalion went to New Guinea and fought the battles of Kokoda between July and November 1942. They were outnumbered five to one, as they held back the Japanese on the Kokoda track. The Kokoda Track is the only land route from Buna (air field) in the north, across the Owen Stanley Ranges to Port Moresby in the South. The 39th fought in spite of being weakened by dysentery, poor supplies, and little food and depleted ammunition.
Beyond the graphic descriptions of battle, FitzSimons choose to weave personal experience of a few figures into his account of the struggle. Stan Bisset, his brother Butch and Joe Dawson are some of those he wrote about. He also writes about Damien Parer, Australia’s greatest war photographer and ABC Radio War Correspondent Chester Wilmot.

FitzSimons states that the battle of Isurava on August 26, 1942 was a defining battle that proved the value of the Australian soldier. FitzSimons gives a moving account of the battle and the extraordinary feats of Sergeant Bruce Kingsbury who was posthumously awarded the Victoria Cross.

FitzSimons journalist background is revealed in the way he wrote the book as compared to a historian. The author did a prodigious amount of research for this book. In his preparation to write the book FitzSimons walked the Kokoda track. He said, “It was the hardest physical ordeal of my life.”

There are plenty of stories of horrific battles and terrible conditions and privations for soldiers of both sides to have endured. General Douglas McArthur is portrayed in a poor light by FitzGerald; he included the upper brass of the Australian Army for their poor performance. FitzSimons points out that Kokoda (WWII) was the Gallipoli (WWI) for a new generation.

If you are interested in World War II Pacific Theatre history, this is an important book about the battle for Australia. Louis FitzGerald narrated the book.

Would you listen to Kokoda again? Why?

Great story of an under-appreciated part of WWII

Not sure I liked the "echo"effect when the narrator was reading a direct quote. Unnecessary distraction

A great true story of suffering and war

What made the experience of listening to Kokoda the most enjoyable?

Kokoda is legend in Australia, and no doubt many places in the world with legends and stories abound. Peter Fitzsimons does a wonderful job in his telling.

What other book might you compare Kokoda to and why?

Consider this comparable to his Tobruk

Kokoda with the background of the men in the field

I will listen to this more than twice Peter covers the story of Kokoda well, with a touch of humor .
A little to-much like a novel .But a GREAT book

Another top book by this author

An engrossing read which will keep you entertained to the end. Write some more like this please Peter.