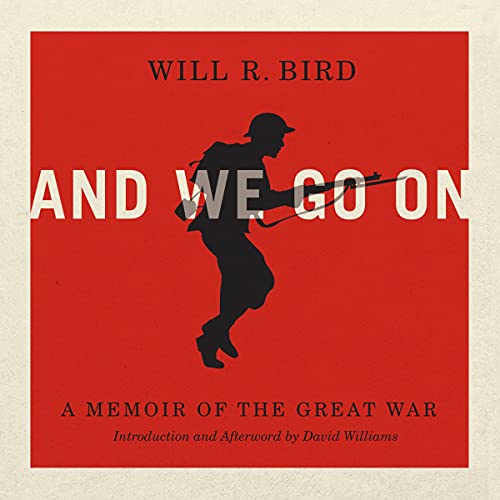 And We Go On

In the autumn of 1915 Will Bird was working on a farm in Saskatchewan when the ghost of his brother Stephen, killed by German mines in France, appeared before him in uniform. Rattled, Bird rushed home to Nova Scotia and enlisted in the army to take his dead brother's place. And We Go On is a remarkable and harrowing memoir of his two years in the trenches of the Western Front, from October 1916 until the Armistice.

When it first appeared in 1930, Bird's memoir was hailed by many veterans as the most authentic account of the war experience, uncompromising in its portrayal of the horror and savagery, while also honoring the bravery, camaraderie, and unexpected spirituality that flourished among the enlisted men. Written in part as a reaction to anti-war novels such as All Quiet on the Western Front, which Bird criticized for portraying the soldier as "a coarse-minded, profane creature, seeking only the solace of loose women or the courage of strong liquor", And We Go On is a nuanced response to the trauma of war, suffused with an interest in the spiritual and the paranormal not found in other war literature. Long out of print, it is a true lost classic that arguably influenced numerous works in the Canadian literary canon, including novels by Robertson Davies and Timothy Findley.

In an introduction and afterword, David Williams illuminates Bird's work by placing it within the genre of Great War literature and by discussing the book's publication history and reception.

“A lost classic...among the most powerful Canadian reactions to the Great War.” (Ian McKay and Robin Bates, In the Province of History: The Making of the Public Past in Twentieth-Century Nova Scotia)

“And We Go On, originally published in 1930 and reissued to mark the 100th anniversary of the Great War, proves that Bird is a neglected master. As University of Manitoba English professor and unabashed fan David Williams argues in his introduction to the new edition, Bird ‘should be required reading for all students of Canadian history and literature.’” (The Chronicle Herald)

What listeners say about And We Go On

An extraordinary firsthand account of World War 1. Once you start listening you won't be able to stop.