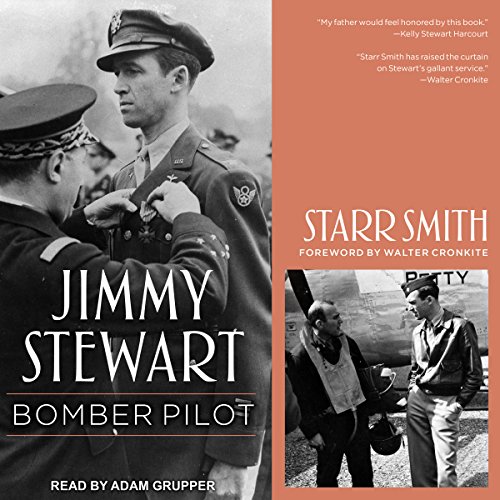 By: Starr Smith,Walter Cronkite
Narrated by: Adam Grupper
Try for £0.00

Of all the celebrities who served their country during World War II - and they were legion - Jimmy Stewart was unique. On December 7, when the attack on Pearl Harbor woke so many others to the reality of war, Stewart was already in uniform - as a private on guard duty south of San Francisco at the Army Air Corps Moffet Field. Seeing war on the horizon, Jimmy Stewart, at the height of his fame after Mr. Smith Goes to Washington and his Oscar-winning turn in The Philadelphia Story in 1940, had enlisted several months earlier.

Jimmy Stewart: Bomber Pilot chronicles his long journey to become a bomber pilot in combat. Author Starr Smith, the intelligence officer assigned to the movie star, recounts how Stewart's first battles were with the Air Corps high command, who insisted on keeping the naturally talented pilot out of harm's way as an instructor pilot for B-17 Flying Fortresses and B-24 Liberators. By 1944, however, Stewart managed to get assigned to a Liberator squadron that was deploying to England to join the mighty Eighth Air Force. Once in the thick of it, he rose to command his own squadron and flew 20 combat missions, including one to Berlin.

"Smith's clear admiration for Stewart comes through on every page, but with an understatement that even George Bailey could have lived with." ( Publishers Weekly)

If you like war, actors aeroplane real life drama and films you'll enjoy this book. He was quite a character

wonderfuly informative, entertaining and inspiring insight into the great man and those who flew with him.

Should be made into a film

Wonderful biography, especially if you know the area around Norfolk, that James Stewart was stationed. wish I had read this earlier.

This is a pretty good book but not what i expected. In keeping with the author’s wartime role, and t can best be described as a crisp and orderly processions of names, dates, and facts which comprehensively walks the reader through Jimmy Stewart’s remarkable wartime service.

I was expecting a lot more in the nature of personal recollections, yet most were collected from other parties who served directly with Stewart. Nevertheless I left with a profound appreciation for Stewart’s wartime efforts, not least his desire to fight rather than be relegated to a desk (for safety) or morale-building films on the homefront.

Jimmy Stewart achieved his high rank and commendations not through his celebrity, but in spite of it. His humility and fighting soirit embody the best qualities of our “Greatest Generation”.