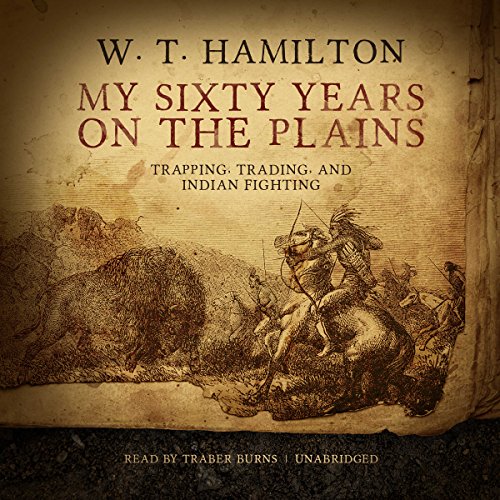 My Sixty Years on the Plains

In 1842, following the doctor's orders for a change of climate, William Thomas Hamilton found himself accompanying a party of trappers on a yearlong expedition. Heading into the wild, Hamilton would prove himself to be a fast learner, as adept with a firearm as with sign language: this early experience would be the making of him. As the 19th century progressed, along with many other trappers, Hamilton found himself drawn into the Indian Wars brought about by territorial expansion.

Exploring, trapping, trading, and fighting, Hamilton shows how every aspect of a mountain man's life relied on his wits and knowledge in order survive the inhospitable environments.

First published in 1905, when the experiences of such pushing, adventurous, and fearless men were becoming a thing of the past, Hamilton's unassuming memoir relates an extraordinary life in a disappearing American West.

What listeners say about My Sixty Years on the Plains

Quite an amazing story. Worth every second. An eye opener. Thank you for the gift.

A snapshot of history

Overall, this was an excellent account of life as it was in the mid 19th century. Shocking when I actually think about the amount of animals that fed the fur trade. It was insatiable but this isn't a gory account rather, just fact. And so we come, to the land-grab settlers, gold miners, deceit lies & plain genocide of the Plains Indians. This is just a wee snapshot of a white trapper. The full picture can be found in "Bury my heart at wounded knee" by D. Brown. The narrator was great & had just the right voice.

Great listen this, if you want too know what it was like living on the plains then this is the book to get .

This is a very fun and adventurous biography of a man that was there and lived it. If you enjoy the wild west, American history, and Native American history then definitely check out this book.

This was a very interesting and well read book

It’s hard to believe this book was free, I really enjoyed the store and the reader.

How the natives were treated

It shows how the white man believed he was right in everything he did. Not believing the natives had the right to protect themselves and their land. Looking at a 19th century written from a 21st century point of view. It's a shame how the natives were treated and and nearly exterminated.

This was interesting and made me aware that I do very much prefer these historical stories/accounts in the original and unapologetically biased language of the time. It’s so much more instructive of how different the view of the world was then than what one finds in modern descriptions. This most definitely is a window to the mindset of the white men who pursued uncertain lives on the western frontier as trappers, explorers, and either friends or enemies of Indians as circumstances determined.
Great job by the narrator.
Keep your powder dry.

I can only assume by "Performance" you mean the "Reader." (By that, I mean Traber Burns.

Wonderful autobiographical account published in 1905 of the experiences of trapper W T Hamilton from 1840 to 1900. Excellent portrayal of the old west, and the different Native American tribes. Traber Burns is an excellent reader as well.

What an amazing life in an amazing time. To see the country and it’s peoples at that time must have been stunning. Great narration.

I loved the coverage of Mr. Hamilton’s life. Excellent narration by Mr. Burns. I felt I was at the campfire taking these adventures in like a youngster. Beautiful piece of history. I’m grateful to have had it presented in a dignified and honest manner. A+++++