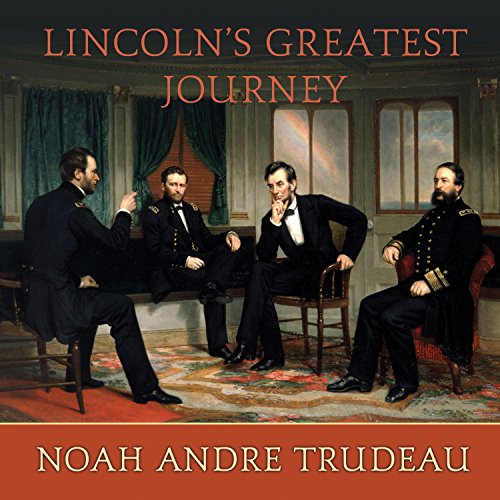 By: Noah Andre Trudeau
Narrated by: Barry Press
Try for £0.00

March 1865: The United States was at a crossroads, and, truth be told, Abraham Lincoln was a sick man. "I am very unwell," he confided to a close acquaintance. A vast and terrible civil war was winding down, leaving momentous questions for a war-weary president to address. A timely invitation from General Ulysses S. Grant provided the impetus for an escape to City Point, Virginia, a journey from which Abraham Lincoln drew much more than he ever expected.

Lincoln traveled to City Point, Virginia, in late March 1865 to escape the constant interruptions in the nation's capital that were carrying off a portion of his "vitality" and to make his personal amends for having presided over the most destructive war in American history in order to save the nation. Lincoln returned to Washington 16 days later with a renewed sense of purpose, urgency, and direction that would fundamentally shape his second-term agenda.

A great Audio _ listen. Most interesting and revealing. Thanks to all concerned. I'm happy.

Loved it! It really kept my interest. An intriguing look at the last couple weeks of Lincoln's presidency and the Civil War. Narration was also top notch!

Content does not live up to the title - hyperbole

What did you love best about Lincoln's Greatest Journey?

though very excited to start this book, I was disappointed overall. The author went down too many tangents and the core theme was lost.

If you’ve listened to books by Noah Andre Trudeau before, how does this one compare?

He did a nice job on the voices for the various characters.

I wouldn't bother with a film.

Unless you do not know much about Abraham Lincoln and the Civil War, I would recommend passing on this one.