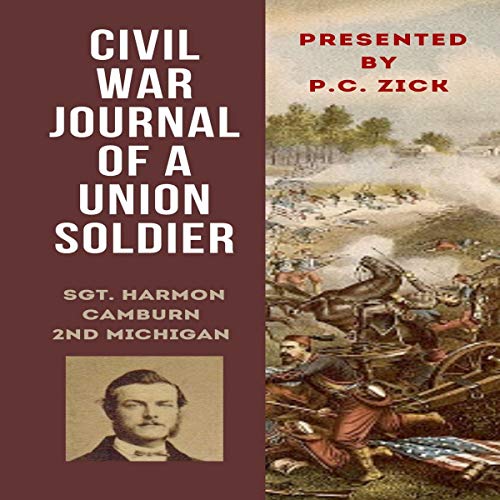 Do you love history? Are you interested in the Civil War? Then this book is one you're sure to enjoy.

Here is the personal account of a Union soldier during the Civil War when young men were forced to kill their own countrymen.

Harmon Camburn signed up for duty as a Union soldier two weeks after the first shots were fired in the Civil War. He served for the next three years, fighting in both Battles of Bull Run and other skirmishes of the War Between the States. His tour of duty ended with a shot through his lung and capture by Confederate soldiers. Fortunately, he survived his wounds and wrote about his time in the Union army.

His great granddaughter, Patricia Camburn (P.C.) Zick, presents this journal along with additional annotations about the war in general. The journal weaves a tragic and compelling tapestry of war from the view at its center. Mr. Camburn's sardonic and realistic view of war is worth remembering. From the day of his enlistment in the Army in April 1861 in Adrian, Michigan, to his final days in the service of the army near Knoxville, Tennessee, the journal provides insight into the minutiae of a soldier's life, from what they ate to the somewhat unorthodox method of obtaining food. It shows the horror of the battlefield to the joys of simply having the sun shine after days of rain. The descriptions of the landscape are beautifully crafted, just as the scattered bodies on the battlefield are ghastly reminders of the cost of war.

What listeners say about Civil War Journal of a Union Soldier

Having listened a number of accounts of the American Civil War, I feel compelled to say that this none is one of ,if not, the nest personal account of that inflict told from the perspective of a union soldier!.

Hah! I kid. As a Southern with roots back the Revolution I must admit I don’t listen or read to to many Union Civil War books, this one was pretty good though. I enjoyed it and it was nice to have a fresh perspective on things.

The narrator was very good I enjoyed his voice and he had good pronunciation and clarity and flowed quite nicely. Military book in particular can be trying for unfamiliar readers but Mr. Hering did an excellent job.

I was provided a copy of this book at my request to review.

I really enjoyed this book.. It is not often that you can experience history in this way.. Reading someone's real feelings about what is taking place..
You can learn all about the facts of what happened during an important and familiar. time in the past, but you don't usually get to experience a live reaction to the actual events.
I felt that the narrator of this book did a good job and made it easy to listen to.
For any history buffs and anyone that just wants to listen to a good book,, this is a must listen.

This is a great reciting of the experience of a soldier in the ranks. His career spans for before 1st Bull Run until (transferred west) he is wounded during Longstreet's attempt to take Knoxville. The detail gives you a good sense of what it must have been like. My only negative is that reader pronounces most of the eastern place names, battles and rivers wrong -- and not just a little wrong but almost recognizably in some cases. This can be annoying and distracting.