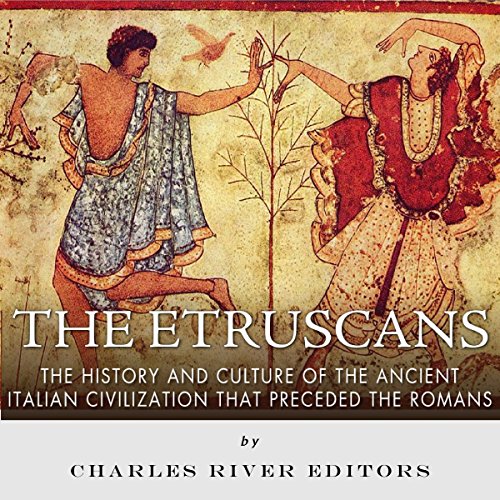 By: Charles River Editors
Narrated by: David Zarbock
Try for £0.00

When people think of ancient Italy, the Romans are usually the first and last people that come to mind, but long before Rome was built by Latin-speaking people, the culture of Italy was dominated by the Etruscans. Although the Etruscans may not comprise the core of most histories of the ancient Mediterranean, they exerted a profound influence on the region from the 8th-5th centuries BCE that continued to resonate for centuries after as the Romans carried on many of their traditions. Today, much of what is known about the Etruscans comes from the ancient Roman and Greek writers who had a deep respect for them but saw them as exotic and foreign. As the famous Roman philosopher Seneca wrote about the Etruscans, "Whereas we believe lightning to be released as a result of the collision of clouds, they believe that the clouds collide so as to release lightning: for as they attribute all to deity, they are led to believe not that things have a meaning insofar as they occur, but rather that they occur because they must have a meaning."

What listeners say about The Etruscans

The content overall is fine but there's a glaring error in the very first line. The author refers to the Etruscans as being of Greek descent, they're not. The culture is Italic and there are several theories as to where they originally came from, but in none of them is it Greece. The author knows this because he talks about it in the rest of the book and nauseum. How did such a glaring error get past an editor?

This is a great book with the misfortune of having a natator that sounds nearly like a computer reading the book. Hopefully they will redo this in the future with a better narrator.