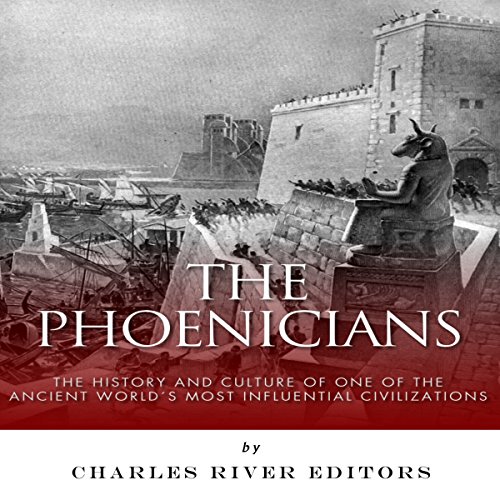 The Phoenicians: The History and Culture of One of the Ancient World's Most Influential Civilizations

By: Charles River Editors
Narrated by: Jack Nolan
Try for £0.00

"These people, who had formerly dwelt on the shores of the Erythraean Sea, having migrated to the Mediterranean and settled in the parts which they now inhabit, began at once, they say, to adventure on long voyages, freighting their vessels with the wares of Egypt and Assyria...." - Herodotus

Of all the peoples of the ancient Near East, the Phoenicians are among the most recognizable but also perhaps the least understood. The Phoenicians never built an empire like the Egyptians and Assyrians; in fact, the Phoenicians never created a unified Phoenician state. Instead, they existed as independent city-state kingdoms scattered throughout the Mediterranean region. However, despite the fact there was never a "Phoenician Empire", the Phoenicians proved to be more prolific in their exploration and colonization than any other peoples in world history until the Spanish during the Age of Discovery.

The Phoenicians were well-known across different civilizations throughout the ancient world, and their influence can be felt across much of the West today. This is because they are credited with inventing the forerunner to the Greek alphabet, from which the Latin alphabet was directly derived. Nonetheless, the Phoenicians left behind few written texts, so modern historians have been forced to reconstruct their past through a variety of ancient Egyptian, Assyrian, Babylonian, Greek, and Roman sources. It's not even clear what the Phoenicians called themselves, because the name "Phoenician" is derived from the Greek word "phoinix", which possibly relates to the dyes they produced and traded.

What listeners say about The Phoenicians: The History and Culture of One of the Ancient World's Most Influential Civilizations

The narration on this is bad. The acoustics are terrible and make for a very echoey, tinny, hard to understand all the words experience. (Yes, I used my best device and headphones.) Sounds very much like a man sitting in the bathtub reading to you. On top of that, narrator seems inexperienced and over-pronounced syllables making for a lot of strange pronunciations and even more hissing and reverberation coming from the bathtub. Took me three tries to understand that the narrator was saying Herodotus. The actual information provided, while essentially good, is just not sufficient to render it useful. Given that the audio and narration are bad and the information provided is too sketchy and truncated, I would not recommend this audio book and would even go so far as to say that this is below the standards which I have come to assume from Audible.

fairly brief overview of the Phoenicians. not worth a credit. pay for it instead (5$) and save the credit for a fuller volume

This narrator sounds like the Doctor from Star Trek Voyager but he's got a problem with simple names like Herodotus & Stabo. They should have stopped the recording, went over how to say unfamiliar names and maybe edited this. This shows he really doesn't know the material well enough to do the job.

It's an ok short book but this narrator makes it painful.

I truly enjoyed learning more about the ancient Phoenicians and how they influenced the ancient world. The content of the book was quite good. My only complaint is that the narrator is very robotic in his speech and seems to have quite a lot of trouble correctly pronouncing several of the names and places in the book.

Like most charles rivers editors audiobooks, the information is well researched. However the way it is presented does not make it easy to follow and it is easy to zone out.