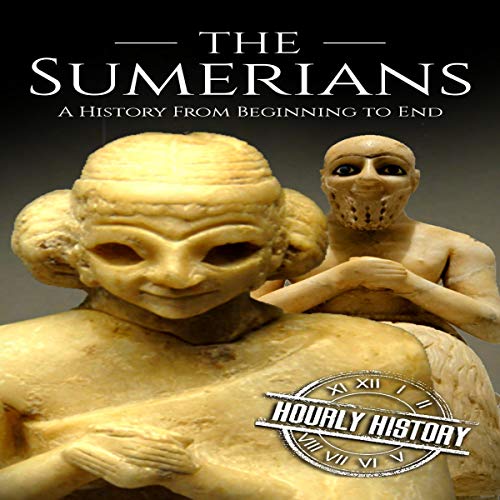 The Sumerians: A History from Beginning to End

The Sumerians settled in the area known as Mesopotamia, between the Tigris and Euphrates Rivers, around 5,000 years ago. They produced many fundamental changes to the way in which human societies developed - these were the first city-builders, the first people to use wheeled vehicles, the first methodical astronomers, and the first people to develop a sophisticated written language. The Sumerians also produced art, music, and literature as well as created some of the first professional soldiers the world had ever seen.

But for all that we know about the Sumerians, one central mystery remains: We have no idea where the Sumerians came from when they suddenly arrived in Mesopotamia 5,000 years ago. Many people have put forward answers ranging from the plausible to the esoteric to the (literally) out of this world, but none of the solutions suggested to date appears to provide a complete or final answer.

From this audiobook you will learn about...

When looking at how Homo sapiens have developed from primitive tribes of hunter-gatherers to today’s urban dwellers, the Sumerians represent one of the biggest and most dramatic single periods of change ever achieved by the human race. This is the story of the advanced, ingenious, and mysterious Sumerians.

What listeners say about The Sumerians: A History from Beginning to End

An exploration to the distant past.

Honestly, the praise is in the title...an ancient civilization with ties to so much of our present finally broken down into a short overview. Gives just enough to keep you interested and able to absorb, while making you want to learn more.

The narration was perfect for the delivery! Easy to understand and didn't rush through the information.

Listened to this book four times before submitting a review. I love this book and am listening to the rest in the series!

this was very disappointing
instead of setting me (the reader)
in the setting of understanding the lifestyle of Sumerians I was immediately put in the author's personal argument.
After that I couldn't follow anything else.

my first intro to the topic .

this is a more detailed description of the Sumarian cultures than l have read before. Enjoyed the structure of the work and details on the historical cultures