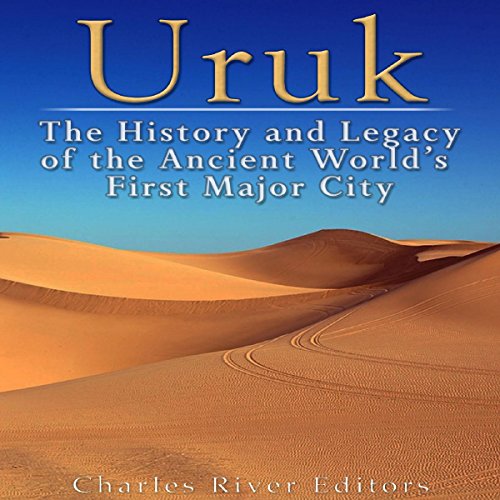 By: Charles River Editors
Narrated by: Ken Teutsch
Try for £0.00

In southern Iraq, a crushing silence hangs over the dunes. For nearly 5,000 years, the sands of the Iraqi desert have held the remains of the oldest known civilization: the Sumerians. When American archaeologists discovered a collection of cuneiform tablets in Iraq in the late 19th century, they were confronted with a language and a people who were at the time only scarcely known to even the most knowledgeable scholars. The exploits and achievements of other Mesopotamian peoples, such as the Assyrians and Babylonians, were already known to a large segment of the population through the Old Testament and the nascent field of Near Eastern studies had unraveled the enigma of the Akkadian language that was widely used throughout the region in ancient times, but the discovery of the Sumerian tablets brought to light the existence of the Sumerian culture, which was the oldest of all the Mesopotamian cultures.

Although the Sumerians continue to get second or even third billing compared to the Babylonians and Assyrians, perhaps because they never built an empire as great as the Assyrians or established a city as enduring and great as Babylon, they were the people who provided the template of civilization that all later Mesopotamians built upon. The Sumerians are credited with being the first people to invent writing, libraries, cities, and schools in Mesopotamia, and many would argue that they were the first people to create and do those things anywhere in world.

For a people so great it is unfortunate that their accomplishments and contributions, not only to Mesopotamian civilization but to civilization in general, largely go unnoticed by the majority of the public. Perhaps the Sumerians were victims of their own success; they gradually entered the historical record, established a fine civilization, and then slowly submerged into the cultural patchwork of their surroundings. They also never suffered a great and sudden collapse like other peoples of the ancient Near East, such as the Hittites, Assyrians and Neo-Babylonians did. A close examination of Sumerian culture and chronology reveals that the Sumerians set the cultural tone in Mesopotamia for several centuries in the realms of politics/governments, arts, literature, and religion. The Sumerians were truly a great people whose legacy continued long after they were gone.

No site better represents the importance of the Sumerians than the city of Uruk. Between the fourth and the third millennium BCE, Uruk was one of several city-states in the land of Sumer, located in the southern end of the Fertile Crescent, between the two great rivers of the Tigris and the Euphrates. Discovered in the late 19th century by the British archaeologist William Loftus, it is this site that has revealed much of what is now known of the Sumerian, Akkadian, and Neo-Sumerian people.

Although Uruk was not the only city that the Sumerians built during the Uruk period, it was by far the greatest and also the source of most of the archeological and written evidence concerning early Sumerian culture. Uruk went from being the world’s first city to the most important political and cultural center in the ancient Near East in relatively quick fashion. Around 3200 BCE, the Sumerian Uruk culture began to expand beyond the borders of Sumer, which coincided with the emergence of writing. The form of writing that the Sumerians developed became known by its Greek name, cuneiform for the wedge style characters that it employed. Writing, like many other inventions throughout world history, appears to have been created because of necessity as the Uruk culture grew.

What listeners say about Uruk

What made the experience of listening to Uruk the most enjoyable?

Would you be willing to try another book from Charles River Editors? Why or why not?

Not after reading this one and comparing it to The Sumerians by the same authors. There was too much overlap and repetitiveness for my taste as I expected to get a very in depth look at Uruk, not of Sumerian civilization as a whole. Secondarily, this book was very uninformative and not particularly scholarly. I was hoping for a much more detailed account of Uruk's history than the few lines contained in this book.

Which character – as performed by Ken Teutsch – was your favorite?