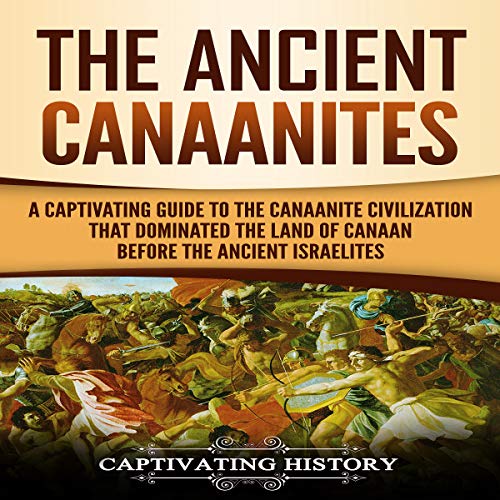 The Ancient Canaanites: A Captivating Guide to the Canaanite Civilization That Dominated the Land of Canaan Before the Ancient Israelites

Did you know the ancient Canaanites invented the alphabet?

The Bible references Canaan several times. For example, God commanded the Israelites to destroy the Canaanites following the Israeli flight from Egypt.

However, the actual history of this civilization doesn’t quite match theological sources. For one thing, the Canaanite civilization consisted of a multitude of different peoples from the same ethnic group but different cultures.

The region also had frequently redefined borders, and very few written records remain of Canaan, making it difficult for scholars to research. It can therefore be hard for people to find an easily understood and cohesive resource on this fascinating civilization.

But that is about to change. In this new captivating history audiobook, you will discover the truth about the ancient Canaanites.

The Ancient Canaanites: A Captivating Guide to the Canaanite Civilization That Dominated the Land of Canaan Before the Ancient Israelites includes:

Get the audiobook now to learn more about the ancient Canaanites!

What listeners say about The Ancient Canaanites: A Captivating Guide to the Canaanite Civilization That Dominated the Land of Canaan Before the Ancient Israelites

White people narrative. And the Canaanites continued to exist after the establishment and destruction of Israel and Judea. The title itself is wrong. I couldn’t listen to the whole thing. Misrepresentation. And it’s now agreed that the Hyksos didn’t bring the chariot to Egypt. It’s also now agreed that Megiddo had no intention of reveling or attacking Egypt. Etc etc etc

Everything was as expected

you surprise, and on a new path. A deeply engrossing book, as I found it difficult to put it down. I recommend this series highly as the author has credibility and thoughtfulness.

My son’s History teacher has this hanging in his classroom. My son loved it, so I surprised him with this at Christmas. Was so happy I could find it!

This book was great because it presents the various opinions and current arguments of how ancient Israel became Israelites. The various theories were briefly presented.

This book isn't thee book, but it's a pretty good one to learn something about ancient Asiatic life. You won't be disappointed.

The book makes it clear that the true history and origins of the Israelite people and their religion are still open for debate.

The Ancient Canaanites is a well-researched account of the Levant and its civilizations. Mr. Editors account is concise, and his review is well documented.

An excellent and comprehensive review of history about the ancient near east. Lands of Canaan are an interesting topic for everyone avid for knowing who those Canaanites were, what they believed, how they lived, and to what extent they were present in the culture of the world that follow their time. Five deserved stars.

Thanks to the Author

It included knowledge I had not heard of before but was established by the author. I was very excited about hearing a different point of view of this culture because in the Old Testament it appears they were only referred to in a negative light.

Very enlightening. Short but I liked that. I required to have the broad picture of the Canaanites and this book is great for that purpose.

wish there was more, but, as the book states, very little is known of canaan

Canaan's Secret's suspense and intriguing plot made for a great audiobook. It was so good I listen to it twice, and it was even better the second time.

The great merit of this book is that the scholarly opinions presented are supported by enough data, but not too much. For all that it contains a very academic conversation.

The Author has explained, in detail, how we have all been misled by incorrect English translations of key terms in Joshua and elsewhere about the Amorites, Canaanites Amalekites and others, and the Conquest itself. The Conquest is NOT what you thought it was.

A great book for anyone who is seeking to learn about the ancient Canaanites. Written by one of the first archaeologists to dig in what was Civilization.

I used to remember how fond I was with the Bible, but I couldn’t seem to find the time to study it closely. And now, I came across the book of Canaanites and it piqued my curiosity. This is the best book I’ve read about the subject and I’m looking forward to more of the author’s works.

This is a very informative, brief history which is helpful in the study of the Bible. Highly recommend it. Wish it had been a little deeper.

I’m pretty amazed with what I’ve just heard from this audiobook especially on the Canaanites artifacts. I immediately searched for them in the web. I came to love the Canaanites more after hearing this.

I pretty think Captivating History did a fine and accurate job with this book considering the narrating time was only close to two hours. How they were known as, what their culture was, and their beliefs are just some of the interesting topics here in this book.

Listening to this brought peace in my heart. I’m not a religious person, but after I heard this, I want to know more about the Bible and more of the Canaanites history.