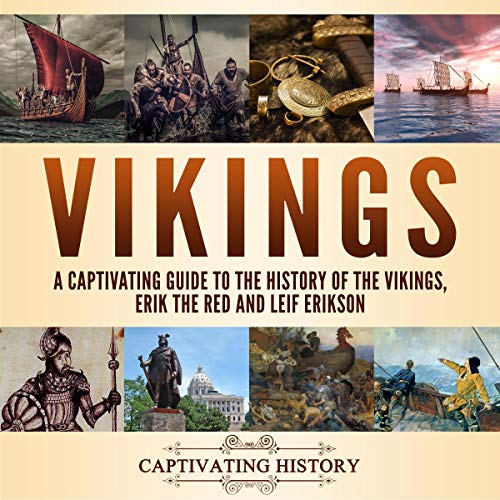 Vikings: A Captivating Guide to the History of the Vikings, Erik the Red and Leif Erikson

By: Captivating History
Narrated by: Desmond Manny,Timothy Burke
Try for £0.00

If you want to discover the captivating history of the Vikings, Erik the Red, and Leif Erikson, then pay attention.

Three captivating manuscripts in one audiobook:

In this captivating history audiobook, you'll not only learn about heroic warriors in battle but you'll also discover the remarkable achievements made by the Vikings.

In the first part of this audiobook, you will discover topics, such as:

In part two of this audiobook, you will discover:

So if you want to learn more about the Vikings, get this audiobook now!

What listeners say about Vikings: A Captivating Guide to the History of the Vikings, Erik the Red and Leif Erikson


The book was ok but skips over the Vikings were raiding England and Europe. The background information was interesting but moved into the Christian period with little discussion of trade and society.


I always wanted to learn more about the Vikings. I found the information interesting and a good diversion during my daily commute. I think I understand their anger and retaliation a little better having read about forced conversions.

No need in reading this. Most of what's written is speculation and myth, not history. The performance is terrible.

Definitely learned some new info but a lot of this book is very repetitive. There are several parts of the story that are repeated numerous times for no apparent reason. The person reading in the first half also sounds very robotic. Given these reasons, it was tough to stay interested but I eventually made it through to the end.

I don’t know why, but the writing just keeps repeating itself. You’ll hear an entire story, then not long after you’ll hear the same story but with different words.


I enjoyed this although, it's more of a paper than a book. Not a deep history but, it touches historical high points and gives me some things to research on my own.

I enjoyed learning about the Viking civilization from a master historian. I appreciate this effort and would like to recommend it.

I really enjoyed this book


I really enjoyed reading the book. The style was straightforward and easy to understand. I recommend thi book

Indeed, concise. And that's exactly what I was looking for. I like history and mythology, and I am always looking for lectures or podcasts for their brevity. I've never thought that I would find it in a book. Chapeau!!!


This is a good book. Much larger and more detailed than I thought on purchasing it but, most pleased with it!

Meets my expectations of an interesting and well-researched yet readable book. I recommend this to all hitory buffs.