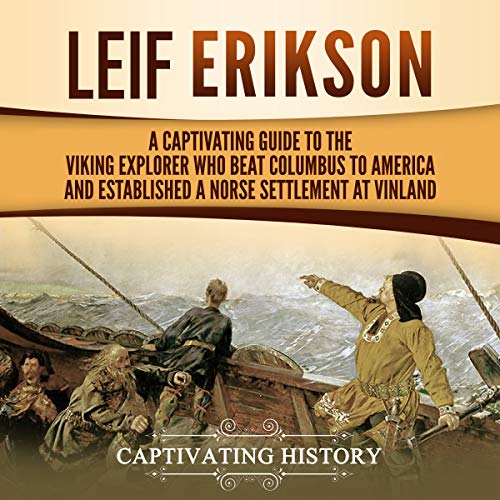 Leif Erikson: A Captivating Guide to the Viking Explorer Who Beat Columbus to America and Established a Norse Settlement at Vinland

By: Captivating History
Narrated by: Timothy Burke
Try for £0.00

The Vikings were exceptional boat builders, seafarers, adventures, and explorers. They not only raided and attacked settlements across Europe and Britain, but they also sailed far and wide, discovering and colonizing new lands. Their impact on history is far-reaching and the mark that they made on the world, especially during the Viking Age, can still be seen today.

In this audiobook, you will learn about the world that shaped Leif Erikson and made him into an adventurous man who was not afraid to sail into the unknown to discover new lands. You will discover how he was able to cross the Atlantic on an open longboat and become the first known European to have set foot on the North American continent, almost half a millennium before Christopher Columbus.

Some of the topics covered in this audiobook include:

Listen to this audiobook now to learn more about Leif Erikson!

What listeners say about Leif Erikson: A Captivating Guide to the Viking Explorer Who Beat Columbus to America and Established a Norse Settlement at Vinland

I Didn't Know that about the Leif Erikson.

Lots of good information presented in a cohesive format. A reader could stop reading about Vikings with this book or continue to learn more with a solid base of information.

Well written and comprehensive survey of the Viking age and Leif Erikson’s life. Would have liked more information on their culture and beliefs, but there are other sources for that. This is a good place to start a journey of exploration into the Vikings.

Enjoyed learning about a piece of history unknown to me before. Unaware of the reach and influence of the life of Leif Erikson Vikings.

This is a fascinating look into the life of the Leif Erikson. It helps the a Norse Settlement at Vinland. The Vikings more clearly understand the culture of these people.

I really enjoyed reading this book.

I love nonfiction about topics that I enjoy listening and learning more about. Leif Erikson is one of those topics. And even though I've read my fair share of books about Leif Erikson but there's always more to discover.

Here you will better understand Leif.

For the book itself I found the descriptions well told and interestingly written. It is difficult to write 'history' when only thin written references are available. Having been a fan of the Leif Erikson, it was fun to get a better handle on the chronology, the sagas and the lineage.

Excellent book, a must read.

This is a good follow-up to fans of Captivating History and/or the Leif Erikson: series; it's very broad and its tone and pace are generally punchy enough to keep things moving while providing salient details. It gave me a quick-and-dirty overview of all things Viking Explorer, but it is not a source I would want to put on my works cited page for a graduate history course, for two reasons.

this could have been a short essay, if all the repetition had been omitted. it is very short as is, but they really tried to stretch it out as much as possible, like a high schooler bullshitting to make the minimum required word count. it's a good story, but no thanks to the writer, seeing as how it is a true story..

One of the best series from Captivating History.

This book was not as good as his previous book on the somewhat same topic which I thought was excellent. Like Captivating History’s other book which I read on the Normans, the book on the Vikings was both easy to read and provided a lot of information.

A must read to know Leif Erikson.

The audible is a fair blend of history and fable, which is the best you can get from a time in which the written word was sparse and the need for embellishment was great.

C.T. is one of my favorite authors.

Author of Captivating History is technical enough to give solid, reliable history, but leisurely enough that is engaging and accessible. They strikes a near perfect balance. It also has excellent history of Norse Settlement at Vinland. I have read many books on from these authors for both research and leisure, and this is the best I've come across.

Great book! I read a lot of history.

This book is a good overview of Leif Erikson history. It goes just in-depth enough to satisfy without bogging in details. The author Captivating History is especially adept dealing with Western invasions this was clearly his interest. Also had excellent overview on the Viking Explorer

Fascinating look at the impact of the Vikings

After listening to this I can say, I don't think anything is left out here, be it the Leif Erikson, Vikings prowess as ruthless warriors, to their exploration of Island, Greenland, the North Eastern US mainland, today's Russia, countries around the Mediterranean, their gifts as tradesmen and merchants.

For me, this was by far the best history of the Leif Erikson Vikings I have read. From the get go, the author drives the story forward in a historical way, covering the start of the Viking era as we know it.

Wonderful for those curious about the Vikings.

Good book for anyone interested in the Vikings pre-Columbus trip(s) to North America! (by at least 500 years we know of, for sure!). This is STILL the best overall book on the Leif Erikson.