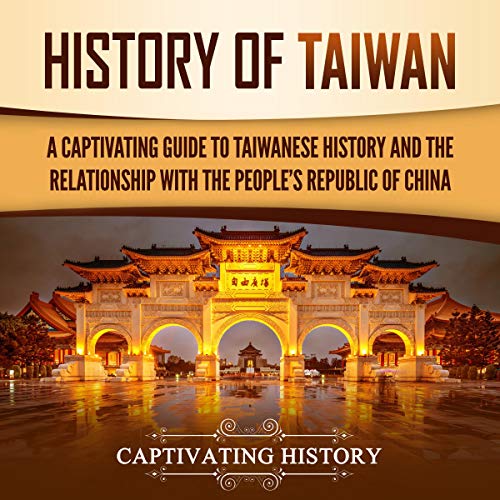 By: Captivating History
Narrated by: Edwin Andrews
Try for £0.00

If you want to discover the captivating history of Taiwan, then pay attention....

The history of Taiwan is astonishing. Politically, Taiwan - was a warlord culture. The Portuguese, when passing by the island in the mid-1540s, called the island “Ilha Formosa,” which means “Beautiful Island”.

Then the Dutch came in the 1620s, searching for a base of operations for the Dutch East India Company.

Then the Han Chinese came in the 17th century. Many of these Han Chinese were refugees from the wars in China. This influx caused an explosive reaction.

And then came the Japanese in 1894! Taiwan was subjugated to a Japanese program of inculcation. All the people of Taiwan had to learn Japanese, and Shinto shrines cropped up everywhere.

Then came Chiang Kai-shek in 1949. He awakened the conflict between the vestiges of Japanese influences and the Republic of China.

Having been inflicted with so many cultural and political invasions, a new breed of Taiwanese people rose up, and they wanted freedom from the oppression they had faced for decades, although there were some who wanted socialism and communism. Taiwan is not even recognized as an independent sovereign by every country in the world today.

Listen Taiwan’s story - a story of an island that walks a tightrope searching for its identity, balance, and fate.

In History of Taiwan: A Captivating Guide to Taiwanese History and the Relationship with the People's Republic of China, you will discover topics such as:

So if you want to learn more about the history of Taiwan, then buy this book today!

What listeners say about History of Taiwan

Does the trick, but many issues

The most glaring issue with this audiobook is the pronunciation of pretty much all Chinese names. While Romanisation issues and historical differences are all understandable, it was evident that the narrator not only had no linguistic background in Chinese languages (which is not a requirement, but would be ideal for an audiobook of this nature), but more importantly had done little to no even basic research on Pinyin pronunciation (i.e. the "King" dynasty). This was not only quite jarring to listen to, but also made it hard to identify names and places that were being said in order to look further into them.

There were also at least 3 instances I noticed of lines being stumbled and respoken that weren't edited out. Not major, but add to the feeling of this being a low effort project.

As for the book itself, while it does somewhat serve the purpose of being a bite-sized summary of Taiwan's history, you pretty much do get what you pay for. The structure is unfocused, broadly chronological but jumps around a lot in the timeline to the extent that as a listener there were many parts that were pretty hard to follow. The latter parts generally felt less disjointed than earlier parts, though the writing about WW2 slightly loses track of it's intended focus on Taiwan.

I also very much did not trust the information given about Taiwan's Indigenous populations, as it felt incredibly oversimplified, often saying stuff like "the Indigenous people would do yada yada" without much regard as to which tribes, what areas etc. For a specific history of Taiwan, this feels remiss.

I'm aware that some of this is nitpicky, and I don't mean to say that the book completely fails in delivering a concise history of Taiwan, but it's definitely not a book I'd actively recommend to someone.

This audiobook opens my eyes and I could not stop listening to it. Even though the book is very comprehensive some of the information the author got is either manipulated, biased or missing. It is far from perfect. There is a lot of truth about Taiwan to be explored.

Was hoping for a deeper history lesson. I am not a fluent Mandarin speaker but some of the names were absolutely butchered - Mao Zedong somehow become Mo (like in the 3 stooges). Good voice but some coaching on pronunciation would have been helpful. Also, several times there was a clear pause after a mispronounciation - no big deal, just edit it out.

I was looking for a quick primer on Taiwanese history, but I’m left wondering if I got it.
Many pronunciations were badly wrong. The WW2 portion went on strange tangents and was laughably wrong in many respects. Knowing how incorrect the WW2 history was made me question how accurate the rest of the history was.

Narrator tried their best, but the history is accurate. Dude wasn't very interesting to listen to, and his mispronounciations were jarring.

I couldn’t get half of the historical landmarks, characters, and just general sense due to improper(western) pronunciation. Please take into account people who can actually speak Chinese and have no idea what are the authors referring to when they narrate.

It is very thin. The book describes a series of events without trying to create much connection between them. It is heavily focused towards military battles and regional conflicts and gives little understanding of Taiwanese society. The narrator has made zero effort to learn the correct pronunciation of names and places. However, for a short historical overview it might still be worth your time.

RUN AWAY! 1 Star! SAVE YOUR CREDITS!

I don't usually write reviews of books, but the audio book gets a one star. The content of the book is like reading a Wikipedia page on Taiwan. The narrator clearly doesn't speak any Chinese and mispronounces nearly every name and place name in the book. The "Mao" in "Mao Zedong" becomes "Moe." The audio editing is awful, and there is even a moment where you hear the narrator say "ugh" after he mispronounces something. I'm sure narrators do that all the time, but those vocalized "ugh" moments haven't made it into any other book I have listened to on Audible. 1/5, save your money or credits for some other history of Taiwan.

Great info, but difficult to listen

I appreciate the work put into this effort and limited biases in the writing. My challenge, as a Taiwanese/Chinese speaker is the pronunciation of people, places and other references. It's obvious the narrator does not speak the language, but it's more than that. Even familiar names like Mao (pronounced 'Mo') make it very uncomfortable to listen to. I understand they are trying their best, but it would be beneficial to have it read by someone more familiar with the terminology and linguistics.

There’s some good information in here but if you are the type to be bothered by poor copy editing or less than stellar audio editing it will distract you. I have enjoyed many products by captivating history and the issues here seem like an anomaly.

Pretty sure this was a high school term paper originally. Learned a little, but it was tough to finish.