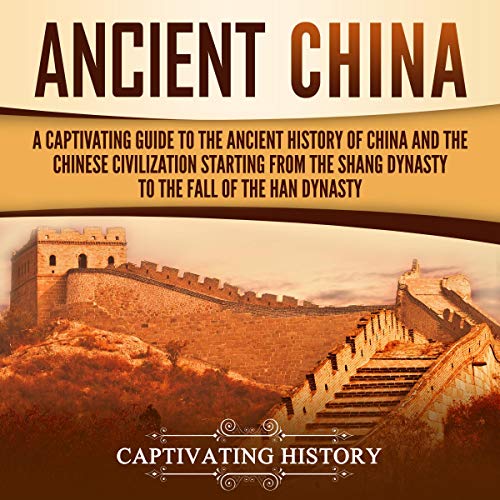 If you want to discover the captivating history of ancient China, then pay attention....

In this audiobook, you will be led on a journey through almost 2,000 years of Chinese history, showing you all the ups and downs of those ancient times, the sufferings and joys of the Chinese people, along with their greatest achievements and failures.

Dynasties will change, people will be killed and born, art made and destroyed, but the Chinese civilization will prevail, rising from humble beginnings to an empire that at some points outshined any other in the world at that time. And yet it won’t be only a tale of kings and queens, emperors and rulers. Of palaces and forts, of swords and shields.

It will also tell a story of farmers and merchants, artisans and artists, philosophers and scientists. And hopefully by the end of this introductory guide, you will gain a sense of what, who, and how the Chinese civilization was made as great as it was and still is.

In Ancient China: A Captivating Guide to the Ancient History of China and the Chinese Civilization Starting from the Shang Dynasty to the Fall of the Han Dynasty, you will discover topics such as

So if you want to learn more about Ancient China, scroll up and click the "add to cart" button!

What listeners say about Ancient China

Read the book instead

I found the narrator’s pronunciation of Chinese words grating and highly inaccurate. It is clear he never bothered to learn how the Chinese words are meant to be spoken which led to much confusion when listening to it. Save yourself time and read the book instead which I believe is available as a free book if you have kindle unlimited.

Good one but it's not an enjoyable read.

The writing is a bit finicky also listen some repetitive things. But still So good book to have, well worth reading.


If you are not accustomed with China and its history and their system of thought, then you must try Captivating History book.

Somewhat an excellent exposure and unusual insight into China perception (new and strange to me). The author provided too much data into little space, congested one but still a nice effort from Captivating History team.

This audio-book is especially for those who never took modern china history, this audible is absolutely a good listen, very informative, written in elegant and easy language. The only thing, the given stuff is repeated many times.

An educational stuff written by Captivating History on the chines subject, carries an understanding into the history and expansion of one of the world' super powers.

A definite recommendation for history lovers.

A definite recommendation for history lovers. Generally people think of history books as being boring but A CAPTIVATING GUIDE TO THE ANCIENT HISTORY OF CHINA is not of that class. It is a captivating and comparatively easy to understand the stuff.

If you need to be superiority up-to-date about one of the great Asian nation (china) and how it spasms into the modern world, “Ancient China" is a must have for your digital library.

Good summarization of the history.

The author visualize Chinese and other reader’s very valuable prospects to know about Chinese leaders. Chinese whoopla machine has done too slight to link the general public and the governance, which will destruction the political root of Communist Party.

I only like how the book is organized, in a best way but the details are too much and repetitive. But there is no other issue. All the stuff is really well manged to understand the history. I didn't like to post it four stars as it is my first audible but I also can't post all the five.

A very good summary and thorough explanation of ancient China. Sometimes it was hard to understand, but it's not because of the author or reader. Rather, like Ancient India and Ancient Japan, the rulers and times are complex. There are also highlights and insights into why some emperors were more effective rulers than others.

The subject matter was very well organized. I also have ancient Japan and India audiobooks too. All three including this book give a fascinating account of Aisan History. I recommend this and other two bodies of work since they compliment each other. These countries did interact with each other throughout various times in history.

Thank you for taking the time to compose these works.

This is a cheap, short, but well done overview of the history or China. Very informative for what it is.

For stories I would rather recommend

The authors of Captivating History are famous for his reflection, I am sure my opinion is perfect, that "The Chinese are smarter than us", and that insolence of admiration shows through.

This book accomplishes what it sets out to do, which is just list out all of the major comings and goings of Chinese dynasties from the ancient past.

It is not a super comprehensive guide of all aspects of Chinese civilization (it's not trying to be) and does not dive super deep into all of the precise chain of events that lead to different political/cultural ebbs and flows. However, if you're looking to get into Chinese history, this is a solid starting point because with this Guide in hand, you have a decent foundation of the general timeline of Chinese civilization, and can deep dive into particular points in Chinese history with some context.

There is not much of a story format here (again, probably not trying to be). First half of the book feels very much like the "geopolitics" section, where it's just a run down of ancient dynasties through Spring and Autumn period and Warring States period into Han Dynasty and whatnot. AFTER that, the second half dives a bit more into the history of Chinese culture, philosophy, technology, etc. Realistically, the philosophy & technology played a pivotal role in the geopolitics of the ancient dynasties, but this book doesn't realy intermix the different sections that it has laid out.

This is very much a formal "Let's run through geopolitics, then culture with philosophy and technology." listing of things that happened. But again, a solid guide to start with to give you context on Chinese history before diving into more specific time periods/aspects of Chinese Civilization.

A lot of comments, such as 'China is truly a communist state' or 'modern humans have been living in China for 200,000 years' are not actually supported by fact and are at best conjecture or sloppy research, or at worst expressing some hidden agenda i have yet to pick out. Probably it's just oversimplification to make things sound 'exciting '.
It's treatment of the warring kingdoms period, a notably complicated period, has failed where every other attempt at describing it has also failed, too many shifting new names and places too quickly to actually follow. Although it appears to be a near impossible task to make that period easy to follow, so I don't judge it too harshly for failing where everyone else i have encountered, also has

Started off okay as far as content. Couldn't continue due to the incorrect pronunciation. I'm not listening to this just to hear a story - I want to be able to discuss it with actual Chinese people and reconcile it with the bits of Chinese history I already have in my head.

I have listened to many other historical books and this rates very high.... Recommended. Renewed interest in China

Good one but too much details.

The author provides a good overview of the Ancient China, I did enjoy listening to this book and came away understanding a little bit more of all the Backstage. However, the author's explaining too much details.