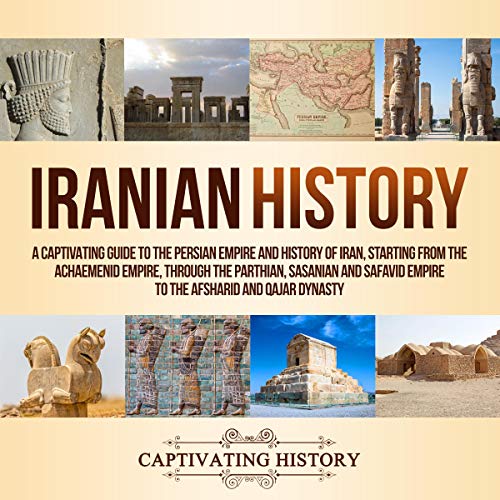 If you want to discover the captivating history of Iran, then keep reading....

Five captivating manuscripts in one audiobook:

In part one of this audiobook, you will:

In part two of this audiobook, you will:

Some of the topics covered in part four of this audiobook include:

Some of the topics covered in part five of this audiobook include:

So if you want to learn more about the history of Iran, listen to this audiobook!

What listeners say about Iranian History

Such an interesting (for me anyway) subject; and concise and fairly clear writing. But, oh dear, the reader can't pronounce any of the names. Most of the names I already knew, I was able to recognise, but with difficulty! As to the names I did not recognise, who were they? No indication is given. Why not have a reader who knows at least a bit about what he is reading? Or who is willing to learn the conventional pronunciation of historical names?

There Are Better Options

Mispronounced names and toponyms, hamfisted/preachy anachronistic value judgments written with all the tact of a flunking undergrad, weak command of sources wholly taking western writings at face value, and the implication that the world west of Iran is somehow more civilized and moral and the world east of Iran is nothing but rampaging barbarians. Utterly awful and an incredible waste of money.

A good introduction but occasionally tarnished by moralizing, speculation, and poor writing. If you would like an overview of the Achaemenid, Parthian, or Sassanian empires, this book provides a nice overview. The modern era overview received much less attention than the previous Iranian empires. I bought this to learn more about the Qajar and was disappointed. I still learned stuff and didn’t feel it was a wasted credit.

Very detailed. Sometimes the big picture is lost. A review or summary of every period would help.

Great way to get critical background

The first three chapters discuss the rise of Persian culture and creation of the Persian empire and several dynasties, as well as relations with the Greeks and Romans. There was a lot of war but also mutual cultural influence.

The history suggests several possibilities concerning why the Middle East will remain a source of a variety of problems for many years to come.

the book addresses debates about Iran’s culture and politics. Political history is the driving focus of this narrative based on decades of research and study, which is layered with discussions of literature, music, and the arts; ideology and religion; economy and society; and cultural identity and heritage.

It is not intended by a scholar who wants to analyze the words of the Shahnameh but rather for a reader who is seriously interested in the story who values the visual quality offered.

I would recommend this book to introduce yourself to the history of Iran and to build a solid foundation upon which to further your studies with additional books ,which conveniently enough.

I have read couple of history books specially on Iran, but the wealth of information and analysis in this book is second to none.