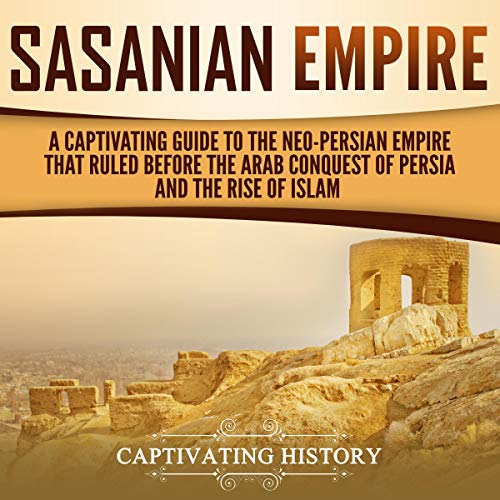 Explore the captivating history of the Sasanian Empire.

Too often, people tend to disregard Iranian history and its ancient empires as so-called bad guys, often barbaric and bloodthirsty, lacking the culture, morals, and finesse of Westerners. Yet this is far from the truth. Starting from the first Persian Empire under the Achaemenids, culture and achievements of the ancient Iranian states were astonishing, influencing nations far outside their borders. That influence was probably the strongest during the Sasanian Empire, which is today considered the pinnacle of ancient Iranian civilization and culture.

In this Captivating History audiobook, you will discover how important the Sasanian Empire was to history and how their legacy became an integral part of what we today think of as Islamic culture.

In Sasanian Empire: A Captivating Guide to the Neo-Persian Empire That Ruled Before the Arab Conquest of Persia and the Rise of Islam, you will discover topics such as:

So, if you want to learn more about the Sasanian Empire, listen to this audiobook now!

What listeners say about Sasanian Empire

The Sasanian Empire was a formidable.

The Sasanian Empire was a formidable and influential world power that is not widely remembered as other important parts of history are. It is one of the largest and most significant entities to ever challenge (and even defeat, numerous times) the feared and imposing Roman/Byzantine empire, creating a power balance in a volatile, important region of the world.

Captivating History's team has done a fantastic job narrating the political history of the awe-inspiring Sasanian Empire. Anyone who has even the mildest interest in Sasanian Iran, Ancient Persia or even Middle Eastern history in general has to pick up a copy of this book.

a great presentation of Sasanian Persia.

There are a number of reasons for this, foremost of which is the bewildering array of languages faced by anyone interested in understanding this very important era in Iranian and Central Asian history. To make matters worse, much of what we do know about this empire comes from either outside accounts of Sasanian Persia, or from sources written long after the empire's collapse in the seventh century.

Best general reference in English in this book.

Pehlevi (Middle Persian), the official language of Sassanid administration and rule, lacks even a modern reference grammar in English. Even Tibetan offers better linguistic resources. This is truly a shame, considering the enduring cultural influence of Sassanid Empire. Indeed a top book.

Exclusively dedicated to the Sasanian History

In this book, the author presents a full picture of Sasanian Empire history, mostly from a political point of view, but also with due regard to changing ideologies and economic pressures. In addition to relying on the testimony of ancient historians, he also makes extensive use of material culture, art, and inscriptions from the period. In short, he provides a readable and concise account of Sasanian history, as well as providing a gateway for future study of this fascinating empire.

Filling a Gap of the history.

Still this is the best written in English about their history. Works in French and German have so far been the major references for their history.

This is an excellent book for some of the details of that era that is missing in our history books. As many are beginning to attest, the current history books are written by one side and greatly exaggerate the accomplishments of their side while down play the achievements of the other side, which they confess, were great civilizations. A good such exaggeration is the fact that 300 Spartans blocks 200,000 Persian with primitive weapons of that era.

I love the book, I would have liked to see more of a story telling details in this book. This book is a little dry and just reports dates and events without much detail and elaboration.

Its relevant and free for me.

Sassanid Empire is an unknown entity to most readers - including a good number of historians. For Late Antiquity the number of books in English diminishes progressively the farther east one moves. By the time one arrives at Sassanid Empire the number of relevant and inexpensive stuff for the history buffs.

A Useful Survey of an Important Empire.

This book attempts to fill a large gap by providing a concise and up-to-date survey of a neglected period and area of the ancient world, and for the most part it succeeds. It helps that the Sasanian Empire is author's academic specialty, which allows him to present the story of the Sasanians from their own perspective, not that of the Romans and Byzantines, as is often done. I found the work to be both engaging and illuminating.

Interesting aproach to the issue,based in part on new evidences available or on reinterpreting the classical sources. A fresh and daring point of view but too speculative in some moments. Overall , a good book which raises new and interesting questions about Sasanian history not failing to also provide the "right" answers. Solid fundamentals need to be acquired before proceeding with this book.

These aristocratic families, typically based in the northern and north-eastern highlands of Persia, retained significant landed and military power as well as being integrated into the Sasanian administration. They were also of Arsacid lineage, thus theoretically disposed to challenge the legitimacy of the Sasanian line.

The author is such a brave researcher

The history of the Sasanian Empire uses new and/or hitherto little used sources to rewrite the last 150 years of Sasanian history. The team of author shows, based on recently unearthed sigillographic material, how certain old Parthian families - of which there are traditionally seven, but the seals show only three were definitely still active - monopolized the greater share of the four Persian regional military governorships or spahbeds.

A new prespective into Sasanian Empire.

In this book the author goes beyond traditional belief which is mainly based on Arthur Christensen on the fall of Sassanid (Sasanian) Persia. they believes the main cause of Sassasnid's fall was internal conflict. She also argues despite some of scholars' idea from early 20th century, Iran's identity and culture continued in the new Islamic era and there were no discontinuity in Iran's culture.

A new perspective on one of the best book.

A precious study is done on the Persian-Parthia duality in the political structure of the Sasanian empire, mirrored by the Zoroastrian-Mithra contrast of their religious culture. Despite a pretty long section of listing dynastic figures that might not suggest much to beginners, the conclusions are sound, innovative, and intriguing.

A convincing debunk of long-held myths.

A Captivating Guide to the Neo-Persian mighty empire is convincingly explained as the result of the end of the collaboration between the powerful Parthian houses and the Sasanian dynasty, at the end of the last Roman-Persian war and at the onset of the Arabic invasion. Listen to it please.

I have listened to literally 40-50 CH books. In most it ends up being an endless recitation of kings, with almost no mention of everyday life, or even weapons or social structure. Here at least they do mention common people, social structure& a tiny bit about trade.

One of these days CH mite get around to giving a paragraph to diet, clothes, trade items & partners, common housing.

. Overall, this one does a better job than any I have heard about life in this empire.

The author is working hard on presenting the historical era that a lot of Western Antiquity History books neglect to put any time in to. This book is a quick overview of the Sasanian Empire and the mechanics of it inside itself and dealing with multiple fronts from Rome, Armenia, Georgia, India, Central Asia and Arabia

This is a useless book. I bought this wanting a basic history of the Sassanian Empire. The writing and the thought behind it is so bad that no one could learn anything about the history of the Sasanian Empire from trying to read this book. The author has no overview, places nothing in context, and gets lost in details. Try as you may, you can't follow the discussion.