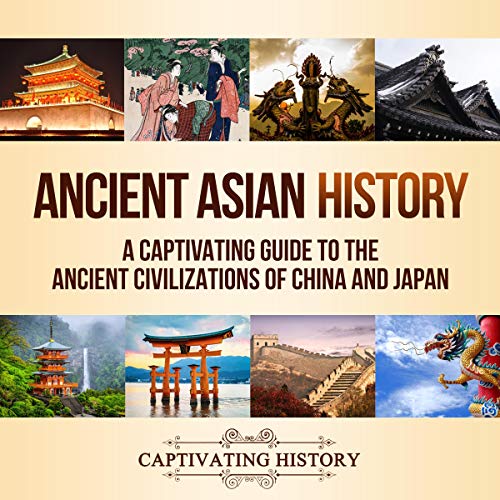 Ancient Asian History: A Captivating Guide to the Ancient Civilizations of China and Japan

If you want to discover the captivating history of ancient Asia, then pay attention...

Two captivating manuscripts in one audiobook:

To understand present-day China, its politics, society, and culture in general, we have to go back to the beginnings of the Chinese civilization.

In the first part of this audiobook, you will be led on a journey through almost 2,000 years of Chinese history, showing you all the ups and downs of those ancient times, the sufferings and joys of the Chinese people, along with their greatest achievements and failures.

In part one of this audiobook:

In part two of this audiobook:

So if you want to learn more about ancient Asia buy this audiobook now!

What listeners say about Ancient Asian History: A Captivating Guide to the Ancient Civilizations of China and Japan

This book embodies what the problems are with modern interpretations of Chinese history. To say Homosapians evolved at the same point in history independently is unsubstantiated unscientific bunkum. It is a isolationist version of history that takes into account almost none of the archeological evidence of intercultural trade and influence from the earliest times. Reminiscent of publications form the first half of the 20th century that draw nationalist conclusions without looking at broader context.

This Is A Concise And Informative About Asia

This excellent audible tells about the beginning part and the roots of Chinese and Japanese culture. It is a concise and informative work. Although Japanese culture and Chinese culture were isolated from European culture for a long time, the Asians were able to develop many of the same things as the Europeans did and sometimes even before the Europeans.

In Ancient Asian History by Captivating History, we listening about the early history of two major world powers today: China and Japan, we listening how the different leaders ruled and what their philosophies were in ancient times. How they both formed and changed their views on things such as laws and government, society, religion, and much more.

Good on history. Great fibs. Interesting historical information.quick listening. Would recommend to friends and family. I would also listen to more audible like this one.

narrator was bland and the story was boring and slow. someone who likes this type of history speak may like this

introductory serious study, however, it succeeds

Our teachers once told us that one’s geography is one’s destiny, and if this is so, then China and Japan are examples of this. Isolated by mountains, weather, and island archipelago, China and Japan, respectively, were free from outsider interference to begin and develop in relative safety. They created small pieces of civilization which eventually –though tortuously—into kingdoms and even empires. Captivating history tries to give us an encapsulated look into these magnificent lands and the cultures and political entities that developed there. Through these, the author attempts to show the seeds of elements of these nations’ personalities today.

Do you REALLY want to study the ancient

This double serving of Asian history focuses on ancient China and Japan and attempts to span thousands of years of legend, history, and commentary into a small audible. It is a daunting task, made even more so by the fact that it does not provide the listening with a timeline of events or chart of rulers and their periods. Thus, it is a complicated listening and meant for study rather than casual listen on a rainy autumn afternoon, accompanied by one’s favorite cup of chai tea.

audible starts with a lot of regions, dates, emperors, and usurpers, that it was hard to follow. Then the chapters of the dynasties start and the audible became enthralling as more time was spent on each of the dynasties. I was able to listen about China.

audible starts with a lot of regions, dates, emperors, and usurpers, that it was hard to follow. Then the chapters of the dynasties start and the audible became enthralling as more time was spent on each of the dynasties. I was able to listen about China.

A Condensed Overview of China's History

China is familiar to the West but much of what's known remains mysterious to Western culture. This audible in the Captivating History series attempts to provide more familiarity and history to those not that familiar with it. The audible would be a fair introduction to someone unfamiliar with China's history but the main problem is - how does one provide an overview of such an old civilization/culture without leaving a considerable amount of that history out?

I found this audible to be interesting and listening to a lot, my knowledge of Japanese History is more from the Meiji Restoration to modern times, so it was interesting to listen about the early days of Japan. This work covers not only the history but the arts and the culture of Japan too.

I came to this audible with zero knowledge of Japan, so all the contents are fascinating to me insomuch as it feels like exploring the history of a near alien civilization from my perspective. The audible is well listen and concise, yet informative, and covers a broad range of topics to give a general overview without getting too bogged down in the minutiae.

history of the ancient world

It is a good audible& covers what I need But for me it does not have that wow factor. As a general reference audible on the ancient world to the fall of Rome, it's good

A fast-paced, concise, and orderly account of both Chinese and Japanese ancient histories. An overview of the pre-history and development of both cultures and how they influenced not only their modern-day societies but the world as a whole. Essential listening for those who may not know much about early Asian history.