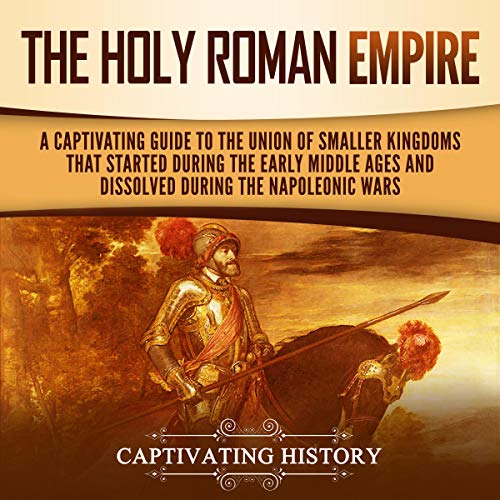 If you want to discover the captivating history of the Holy Roman Empire, then pay attention....

Beginning with Charlemagne, the great and educated king who would serve as an inspiration for world leaders from Frederick II to Adolf Hitler, the Holy Roman Empire’s intricate ties with the Roman Catholic Church would provide for plenty of excitement and drama in its early years. However, as the empire staggered through the Middle Ages and into the Renaissance, it would eventually be forced to declare its allegiance with a new way of thinking: Protestantism.

Throughout the story of the Holy Roman Empire, a wealth of fascinating tales from interesting people proliferates. Monks and emperors will clash, poets sing the praises of kings, and the pope rides blind and bareback on a frightened donkey through the streets of Rome. The mightiest monarch in all of the world walks barefoot in the snow in repentance for his angry deeds, and two rival families stand toe-to-toe for the monarchy. Crusades are lost in war and won in diplomacy, while kings are held ransom, revolts are suppressed, and antipopes crowned. And this incredible tale spanning a full millennium is ready and waiting for you to be listened to.

In The Holy Roman Empire: A Captivating Guide to the Union of Smaller Kingdoms That Started During the Early Middle Ages and Dissolved During the Napoleonic Wars, you will discover topics such as:

So if you want to learn more about the history of the Holy Roman Empire, buy this book now!

What listeners say about The Holy Roman Empire

a captivating guide to the holy Roman Empire

from the beginning with Charlemagne to the end cause by Napoleon this book takes a sweeping look at the emperors and kings that helped write the history of Europe. a bit thin in some places but that's to be expected when summarizing nearly 1000 years of history.

great audio book i enjoyed it very much. i got it for my history course great narrator as well
great courses has never done me wrong. love there audiobooks so glad i have audible!