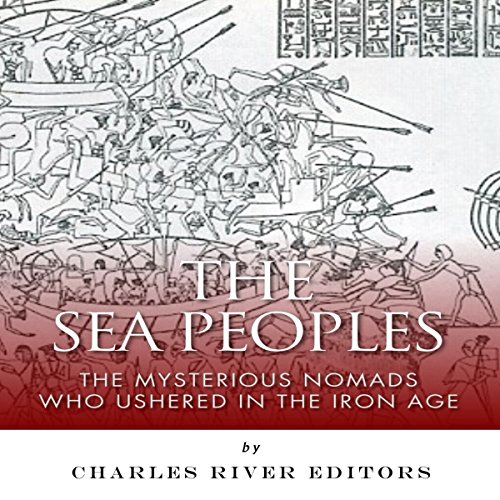 By: Charles River Editors
Narrated by: Jack Chekijian
Try for £0.00

When scholars look at the passage of history, certain epochs and transitions to new periods tend to stand out. The transition from the early modern to the Industrial Age in the late 18th century and the collapse of the Roman Empire are two of the more well known, but the transition from the Bronze to the Iron Age during the late 13th and early 12th centuries BCE arguably changed the structure and course of world history more fundamentally than any period before or since. During this period numerous wealthy and enduring kingdoms of the Eastern Mediterranean Sea region collapsed, and new ones rose in their places.

At the center of this period of turmoil was a group of people known today as the Sea Peoples, the English translation of the name given to them by the Egyptians. Despite their prominent role in history, however, the Sea Peoples remain as mysterious as they were influential; while the Egyptians documented their presence and the wars against them, it has never been clear exactly where the Sea Peoples originated or what compelled them to invade various parts of the region with massive numbers. Whatever the reason, the Sea Peoples posed an existential threat to the people already living in the region, as noted by an Egyptian inscription: "The foreign countries [i.e., Sea Peoples] made a conspiracy in their islands. All at once the lands were removed and scattered in the fray."

What listeners say about The Sea Peoples

I enjoyed listening to this audiobook. I thought it was neat learning about the Sea people. The name 'sea people' conjures up many images but when you look at this as a part of a larger whole or a piece to a historic puzzle, it begins to make more sense. It makes me think of 'clay people.'

They have several presumed origins and there wasn't much documentation regarding them but they existed. They derived from many areas around the Mediterranean Sea such as places that are now Italy, Greece, and maybe Syria. Their arrival played a role in ancient history by ending the Bronze Age and ushering in the Iron Age.

I would suppose that researching this topic was somewhat difficult which makes me like it all the more. I would be interested in more about this time period. This was great.

Kudos to Jack Chekijian for narrating this book. I thought he did a fantastic job pronouncing the names of the tribes and cities of this period. He spoke clearly and made this easier to understand. I would've hashed it up and he went through it like nobody's business. I love history, especially when it's understandable. Super job!

Audiobook received in exchange for an honest review.

Who were the Sea People and why

A nice one hour dissertation relating known documentation from the time of the end of the Bronze age into a cohesive study. This is not my area, but it was a good learning opportunity and well presented.
JC does a fine job of preventing the material from being dusty and boring. No dramatics or anything, just clear speaking and variant cadence and tone.

Charioteers are put to shame.

This book explores the changes in the Mediterranean during the late 13th and early 12th centuries BCE. This was an exciting time when well established city states and cultures fell, and the Iron Age arose. The mysterious Sea Peoples were at the center of many of these changes.

I have long been fascinated by the Sea Peoples and will probably go on being fascinated by them because they will always remain something of a mystery. This book does an excellent job of giving an over view of what is known and what is guessed (in an educated fashion) about the Sea Peoples. Indeed, they were a collection of tribes and peoples and they came in more than one wave. Sometimes, some of them hired out as mercenaries and occasionally they fought on both sides of the same battle. Their origins are still in dispute, however descendants of some of the tribes that eventually settled have been verified through linguistical and archaeological analysis.

The most fascinating thing I learned was that these invaders brought iron weapons and whole new way of fighting with them. These two things revolutionized the whole area over a short amount of time. For instance, some well established civilizations, like Egypt, were still battling with chariots. Chariots take a lot of care and maintenance, not just for the wheeled contraption but also for the horses. Plus they also need a flat plain on which to be effective. The Sea Peoples with their iron age weapons and advanced fighting techniques, put the charioteers to shame.

If you haven’t read extensively on the Sea Peoples or simply want a refresher, then this is an excellent source. It’s a great lunch time break, feeding the mind while you feed your body.

The Narration: Jack Chekijian did a great job with this book. He came off as scholarly without being dry or stuffy. Plus there are several difficult to pronounce tribal names and personal names in this book – Chekijian nailed them all.

Not a particularly long work, and somewhat dry. Apparently little is known for certain about the Sea People, and this work reflects that. A good summary of current knowledge and opinion regarding origins and fate of the Sea People for those interested in the history of the region and period, but don't expect any revelations or really intriguing information. Wider impact of the invasions is not explored much at all. Narrator is competent, but dull. Just the facts, m'aam, scanty as they may be:))

A pamphlet written by committee.

This was a very short, largely context-free summary of the topic. The writing is bland. The narrator has weird and off-putting inflections that make him sound like a computer-generated voice rather than an actual person.

Reading was ok considering the content. Would have been better with at least a little emotion from the reader.