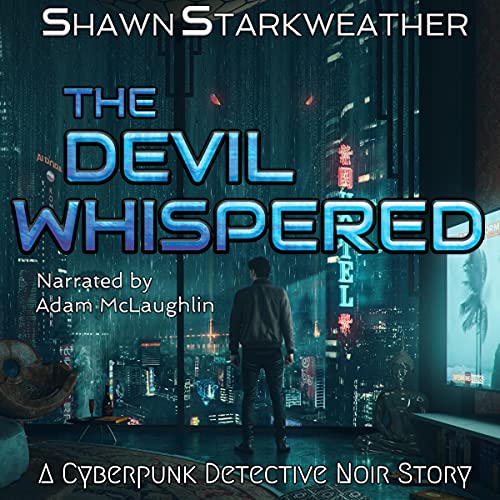 By: Shawn Starkweather
Narrated by: Adam McLaughlin
Try for £0.00

Retired special-forces commander Jacobi Slate is drawn into a downward-spiraling vortex of fear and doubt, while investigating a brutal murder committed by an old friend. As evidence mounts that someone else might be pulling strings from the shadows, Jacobi struggles to understand a developing connection to his own past, which is quickly catching up to him.

Near-future cyberpunk collides with gritty detective noir in this fast-paced thriller that shines a light on both the vast shortcomings and the noble heroism of the human condition. To unravel the mystery, Jacobi will pull on every thread, while chasing leads from the squalor of the most dangerous streets to the high-tech towers of the wealthy elite on his quest to understand a truth he might not be ready to face.

What listeners say about The Devil Whispered

A slog to get through

I never got invested in the characters or story. The main character is boring and the story is mostly predictable.

I very much enjoyed listening to this book. I loved the simple yet very elegant style of writing, the characters development, the novelty of the story plot, the very plausible way things are in the near future, the moral of the story, and well.. pretty much everything else too. 😁

Excellent narration for a fantastic story...

The colors and textures Starkweather paints immersed me in an epic experience ... expertly read with persuasive tones and subtle nuances by McLaughlin throughout the book. I adored the characters, each carrying their own weight and drive.... some of the revolutions spoken would do well to paint on any mural today for consideration! Excellent book through and through, very well narrated and ended all too soon. I would love to see this in motion picture someday!!

Paint by the Numbers

I was very underwhelmed by this book. It hits most of the major tropes for a noir and bulk sci-fi with no surprises. Absolutely predictable and full of cringey dialogue and shallow characters.

The narration fit the tone of the book well, and the story was overall better than I expected. I hope the author writes some more in this genre. There were a few plot holes, I felt, but probably fewer than your average TV drama.