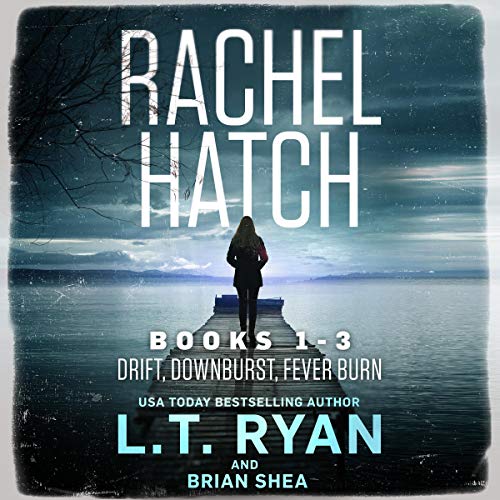 They killed the wrong girl. Rachel hatch will make them pay.

Ex-army criminal investigator Rachel Hatch is a drifter. No home. No commitments. Until her sister's drowning drags her back to the town she left 15 years ago.

Convinced her sister's death was no accident, Hatch partners with the local sheriff, Dalton Savage to uncover the truth. Every answer unlocks another question, and as the investigation begins to unravel, Hatch and Savage find their lives on the line.

Hatch is forced to use her special set of skills - forged on the field of combat - to learn the truth about her sister and bring those responsible to justice.

The first novel in one of the most highly anticipated collaborative series this decade, Drift is a tightly woven story, with deeply developed and endearing characters that will have you rooting for them at every turn and set at an exhilarating pace that will keep you listening late into the night.

Seeking answers to her father's death, Hatch finds herself in a small town outside of Las Cruses, New Mexico.

Controlled by a vicious street gang. A family caught in the crossfire. Hatch sets out to make things right.

The quaint town of Luna Vista, turns out to be anything but. A ruthless gang runs a section of the town. In searching for the truth about her father's past, she's pitted against a criminal network that exposes the town's dark secret. Hatch puts her life on the line to help a boy escape the clutches of the gang. Her act puts her in peril.

Seeking justice for her father's murder leads Hatch halfway across the world.

A ruthless warlord stands in the way. Hatch is forced to take a stand. And it very well could be her last.

On the trail of her father's killer, Hatch finds the path leads to a remote village in Africa. A vicious warlord controls the area in a stranglehold of violence. Hatch finds a fight she never sought, but one her personal code won't let her walk away from.

Outnumbered and outgunned, Hatch is forced to hold nothing back if she ever hopes to get out alive.

She finds herself in a battle as treacherous as any she's faced before, against an enemy hell-bent on stopping her. Danger lurks around every corner. Hatch's code, a simple one - help good people and punish those who hurt others - may prove more difficult a task as the forces against her mount. A whirlwind of threats converge like the unpredictable desert weather and threaten to crash down upon her.

Not afraid of a good fight, Hatch prepares herself for her most difficult battle of her life.

Fever Burn is designed with the dynamic pacing and storytelling fans of L.T. Ryan and Brian Shea have become accustomed to. This sequel is filled with twists and turns and the relentless pacing that will keep listeners listening on until the very last word.

I enjoyed this boxed set. Rachel was my kind of character. Each book could be a stand alone, but it was great to listen to all of them back to back. It made for some sleepless nights.
I will listen to more books from this author. Great use of a credit 👏.

So nice to read a book about a woman who can take out the biggest and strongest. Her values are great and she does everything to right the wrongs whether it be for her family or just strangers needing a bit of help. BIT might be a little on the slighter side .... Can’t wait to see what she does next. Keep them coming!!!

Really enjoyed the first Rachel Hatch book so I got this set looking forward to the other 2 books. They should have left well enough alone. Hatch went from an interesting damaged character to a super hero doling out deep advice to everyone she meets that she doesn’t kill. The writing is atrocious. Sorry to be so blunt. I’m not listening to book 3.👎👎

Kept me on the edge

Makes my commutes on the road so enjoyable. Leaves you wanting more. I'm excited for book 5 and 6 to cone out on audible.

I like this story but it was so hard to get through this has to be the worse narrator, I would like to have been able to listen to the next set but I just could not take the narrator anymore.

I guess I’m just reading or listening to too many books. Had each one figured out , no surprise. I’m getting that way with a lot of books lately.

Love these powerful women books lately they really speak to who we are as women! Warriors!

I really really liked Hatch until the end if the 3rd story. (Spoiler) if the whole world gave an eye for an eye can you imagine what kind of world this would be? She would have been much better off just forgiving after she found out who killed her father.

Great carry over-plot from one book to another. Superb character development.
Lots of surprises.

excellent, loved the series. excited for the next set of thus series. definitely a Rachel Hunt fan now